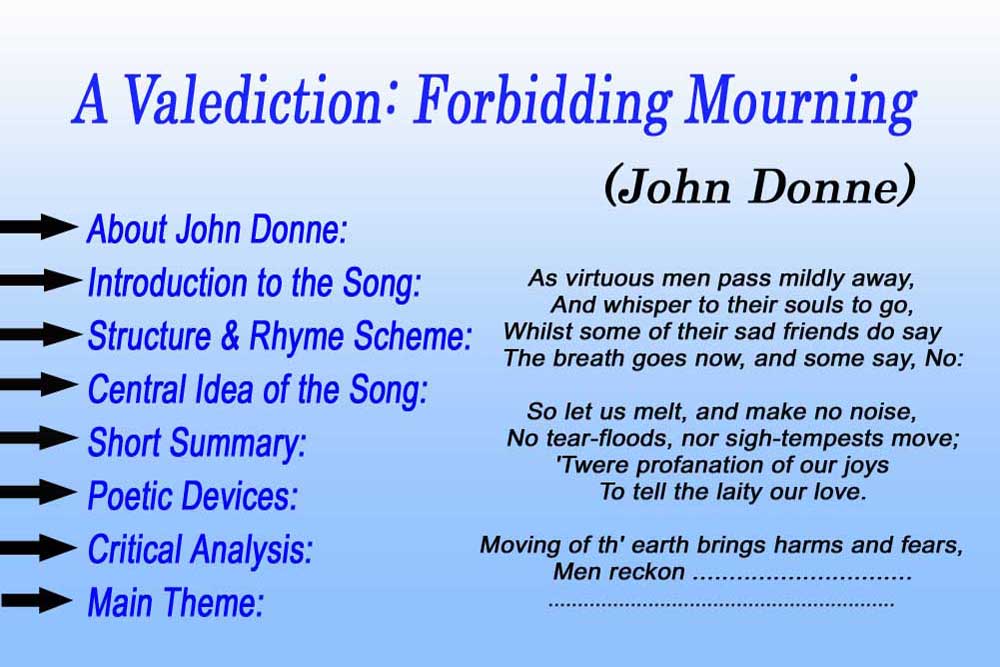 Text of the Poem: A Valediction Forbidding Mourning

As virtuous men pass mildly away,

And whisper to their souls to go,

Whilst some of their sad friends do say

The breath goes now, and some say, No:

So let us melt, and make no noise,

‘Twere profanation of our joys

To tell the laity our love.

Men reckon what it did, and meant;

But trepidation of the spheres,

Though greater far, is innocent.

(Whose soul is sense) cannot admit

Absence, because it doth remove

Those things which elemented it.

But we by a love so much refined,

That our selves know not what it is,

Our two souls therefore, which are one,

Though I must go, endure not yet

A breach, but an expansion,

If they be two, they are two so

As stiff twin compasses are two;

Thy soul, the fixed foot, makes no show

To move, but doth, if the other do.

And though it in the center sit,

Yet when the other far doth roam,

It leans and hearkens after it,

And grows erect, as that comes home.

Such wilt thou be to me, who must,

Thy firmness makes my circle just,

And makes me end where I begun.

John Donne was one of the most prominent metaphysical poets who born in 1572 at London. He married Anne More in 1601. His poetry is famous for metaphysical conceits. His song A Valediction Forbidding Mourning is one of the master pieces of his works.

To know more about John Donne, visit: “John Donne as a Metaphysical Poet”

To know about metaphysical Poetry, see “The characteristics of Metaphysical poetry”

Introduction to A Valediction Forbidding Mourning:

“A Valediction: Forbidding Mourning” is one of Donne’s famous love poems, written to his beloved wife, Anne More. Donne was leaving to France and his wife was worried due to her husband’s parting. When Donne was leaving, the parting words to say good-bye to his wife brought tears in Anne’s eyes. Donne consoled her by this song to stop weeping and mourning. Donne praises their love that is spiritual love and asked his wife to not mourn on his parting. Donne uses metaphysical conceits to depict his true love towards his wife with different objects.

Form, Style, and Rhyme Scheme of A Valediction Forbidding Mourning

The song, A Valediction: Forbidding Mourning, has nine stanzas. Each stanza is quite simple and has four lines with rhyme scheme ABAB. End rhyme of the song is also quite plain that is used to make the song harmonious. In the song, A Valediction: Forbidding Mourning, end rhyme occurs within the first and third lines and again within the second and fourth lines. The rhyming words in first stanza are: away (first line), say (third line), go (second line), and now (fourth line). Here is an example of rhyme scheme of first stanza:

As virtuous men pass mildly away, (A)
And whisper to their souls to go, (B)
Whilst some of their sad friends do say, (A)
“Now his breath goes,” and some say, “No.” (B)

Central Idea of the Song: A Valediction Forbidding Mourning

The central idea of the poem revolves around a single point. John Donne adopted an optimistic approach to deliver his point of view regarding true love. Sometime bad situation occurs like parting, separation, or farewell among true lovers but such bad situation should be treated as a positive instead of taking as negative and mourning upon such occasions. Donne focuses on separation among lovers and this separation is not something that will bring a catastrophe but lovers should manage parting and farewells.

Donne compares ‘separation’ of him and his lover as an ‘expansion’ as a goldsmith beats a piece of iron to enlarge or two legs of compass apart apparently bringing center point down (stanza 6 : line 3). He explains his idea with helps of different metaphors that true love is always infinite, and exists beyond earthly distances.

Summary of A Valediction: Forbidding Mourning by John Donne

In the song, A Valediction: Forbidding Mourning, Donne validates the importance of the spiritual and transcendent love that Donne and his wife Anne shared.

In the first stanza, Donne takes a start with an image of death of a virtuous man whose soul passed away peacefully. There are some friends of dying man around his body who are unable to decide whether or not the man is dead. Due to the virtuous nature, man is dying peacefully and friends are unable to guess either his breath is over or not. He compares peaceful death of a virtuous man to the love he shares with his wife. Here Donne tries to console his wife who is worried for her husband’s parting. He tries to convince not to shed tears ‘tear-flood’ and stop weeping. Donne tries to convince her that their love is better than other lovers and their love is spiritual rather than physical love. A spiritual love does not fade by parting and separation. Donne states that this is parting of just physical bodies and will not bring a catastrophe. He says that her mourning and trepidation can cause big shake than the objects of celestial spheres. It is a greater shaking than that which an earthquake is able to shake the earth. Donne calls “Dull” and “sublunary,” to those whose love is not pure. He justifies that spiritual love is far above compared to physical love.

Donne compares his love with those who enjoy only physical love. He says that their love is refined and pure, and beyond the physical world.  People as a physical beings, cannot understand the worth of spiritual love: They “know not what it is.” He says that their love is more mental than it is physical. This means they are “Inter-assured of the mind” and do not cares for the physical beauty attributes like eyes, lips, and hands.  In sixth stanza poet states that they were two separate souls and by their marriage and true love; they have become as a one. He further elaborates that single body objects expand by expansion and their love will also increase by parting. He compares it with a piece of gold that expands by hitting. The gold symbolizes durability and beauty and Donne compare with their love.

In last three stanzas, poet compares two souls in one body as a one compass has two legs. When the legs of compass apart, compass remains as a single unit, and the center of compass comes down as a point of center. Donne compares his wife as being the “fixed foot” of the compass and he himself is moving. His wife is fixed foot of the compass who is staying at home and Donne is parting and moving making a circle. As moving foot goes far, the fixed foot leans down. This is the only movement that his wife makes. When he needs her to she “hearkens” after him then straightens up again, or “grows erect” when he comes home or returns to the fixed point. Donne ends his song by saying that due to her firmness, he is able to move and complete a circle. No matter what where he roams, she will always get him back to where he began.

Alliteration in poetry is a sound repetition of a consonant in the same line such as the sound of /l/ in “Dull sublunary lovers’ love” and /t/ sound in “If they be two, they are two so”.

Simile is a stated comparison and Donne has used it to compare their love with gold.  “Like gold to airy thinness beat.” Here, it refers to multiple meanings:

(2) Their love increases when they part, like gold spread by hitting.

Second comparison in the song is the parting of two legs of compass that stay as a single compass. Donne and his wife are like two feet of compass and their one union is like compass.

‘If they be two, they are two so
As stiff twin compasses are two’

The term hyperbolic refers to use of exaggeration in poetry. Donne exaggerates her wife’s tears to tear-floods, and her mournful sighs to sigh-tempests.

Symbolism in the Song

The Symbolism in literature is use of different symbols to signify some ideas and qualities, giving them different meanings from the literal meanings.  The symbols in the song are: the celestial spheres, earthquake, the gold, and the compass.

Death, love celebrations, and spirituality are common themes of John Donne’s poetry. The main theme of the song revolves around spiritual love. The Donne tries to state the beauty of spiritual love that has a spiritual bond and does not breach by distance between two loving persons. The whole song of the Donne defines “what is spiritual love?” He argues that distance should not matter between two lovers because sincere love transcends physical distance.

Donne was moving on a journey and due to his departure, his wife was weeping. The poet tries to console her that due to his departure, their love will never fade. He sketches through powerful emotions and pure feelings. He says to her wife that he is going to part physically, but they should not mourn on this parting.

Poet develops the theme by stating that distance of physical bodies does not matter when the love is pure. He compares love of two bodies with a compass. Two moving legs of the compass are the two person in love and the compass as a whole is like two bodies connected as a whole. He further states that distance will enlarge their love as a piece of iron expands by hitting. In the same way, parting will increase their love. He also uses symbolic reference and compares love with gold. Gold symbolizes beauty, purity, and durability.  Donne also focuses on purity of love like the purity of gold.