Aristotle's Concept of Tragedy in Poetics
(Aristotle's definition of tragedy) 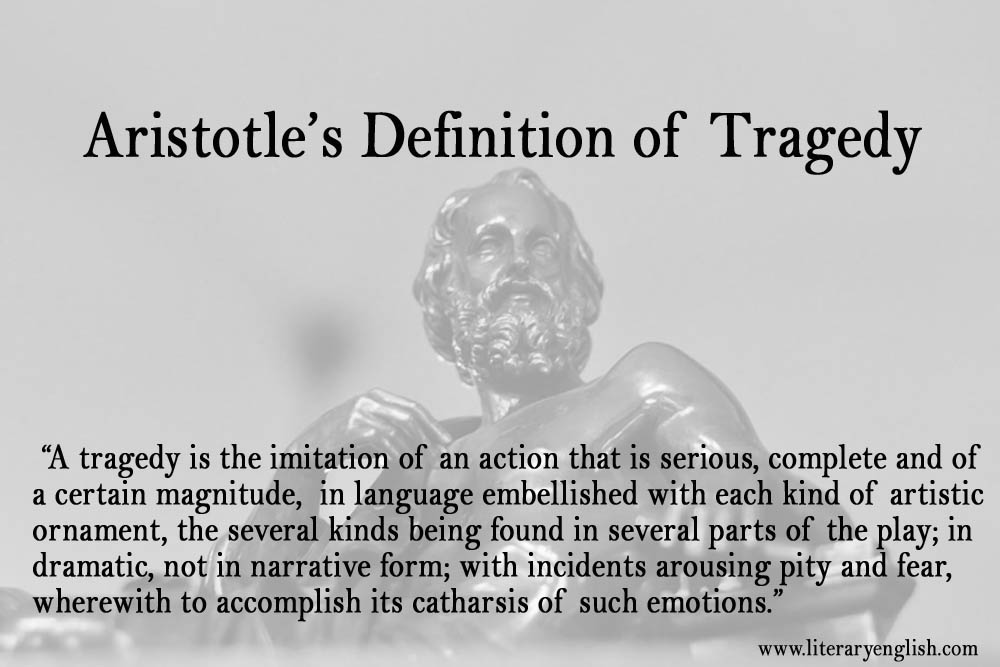 Aristotle’s Concept of Tragedy in Poetics

The Poetics by Aristotle primarily deals with tragedy. Some aspects of tragedy in Poetics may be considered controversial or outdated but its contribution to the literature and influence on English literature is undebatable. According to Aristotle, Tragedy is the highest poetic form. He defined some parameters and rules to write a tragedy. He laid focus on many aspects of tragedy including, the construction of plot, characteristics of protagonist, Unity of action, unity of time, unity of place, conception of tragic catharsis, poetic truth, and diction.

The origin of the term tragedy is not clear but there are different assumptions by scholars. The tragedy was a sad song or oral story performed on a stage to please the gods in 7th century BC and transformed into a play during 5th century BC. Many scholars relate it to goat-song . The assumption about goat songs are:

1.    In 7th century BC, during dithyramb, (a dance connected with the worship of Dionysus) the dancers were disguised wearing goat’s skin.

2.    Some say goat was offered in a prize in competition.

3.    Some relate it to sacrifice of a goat to please gods.

4.    Even some scholars like Dante relate goat song to bleating of goats because goats are noisy and chorus members sung loudly like goats making noise.

Definition of Tragedy by Aristotle

“A tragedy is the imitation of an action that is serious, complete and of a  certain magnitude,  in language embellished with each kind of artistic ornament, the several kinds being found in several parts of the play; in dramatic, not in narrative form; with incidents arousing pity and fear, wherewith to accomplish its catharsis of such emotions.”

Explanation of Definition of Tragedy by Aristotle:

Tragedy is the imitation of an action that is serious: Tragedy, like all other forms of art, is a form of imitation but it deals with serious actions only. Therefore, Aristotle considered tragedy as a highest poetic form that is not a mere slavish coping. Therefore, tragedy differs from comedy because comedy lacks serious actions and imitates grotesque actions.

Complete and of a certain magnitude: According to Aristotle, the term complete means the plot of a tragedy should have a proper beginning, middle and an end. The sequence of the incidents should be logical. The beginning of the action means it does not come after anything else. Beginning should not be linked to incident that is outside the main plot. In the same way, middle should be followed by the beginning with a coherence and all parts should be related to same main plot. The end should be the abstract of beginning and middle incidents rather than any external sub plot.

The term magnitude refers to the length of the tragedy. A tragedy must have a sufficient length. It should not be so long or short. The action of the play should be appropriate enough to catch the sympathies and interest of the spectators. It should not be long enough to make it boring or short enough so that spectators could not attach their sympathies with the tragic characters.

Language embellished with each kind of artistic ornament: The term language embellishment means diction of verse and songs. The tragic play consists on versus to form up dialogues between actors and song for the chorus Thus the solely purpose it to please the spectators and readers.

The several kinds being found in several parts of the play: In defining tragedy, Aristotle laid focus on the structure of the lot. He placed plot at the top in formative elements of a tragedy. He focused that the order of the incidents should be logical and coherent in a tragic play. Long parts being divided into small parts to form up a coherence and unity. All the parts should be coherent and relevant to preceding and following incidents.

Incidents arousing pity and fear, wherewith to accomplish its catharsis of such emotions: The catharsis is the most debated topic from Poetics by Aristotle. Tragedy arouses pity and fear because of serious actions causing tragic incidents with different characters who have attained sympathies of spectators. The sight and experience of these painful and horrific incidents purge the thoughts of such emotions. When people read a tragedy or witness a tragic scene, they tend to become more emotional because of attached sympathies to the tragic figure. When they undergo this process, they cleanse off the excess of emotions in them. It gives them a relief and further makes them feel stronger and they become able to face such high emotions in real life.