Summary and Analysis of The Solitary Reaper by William Wordsworth 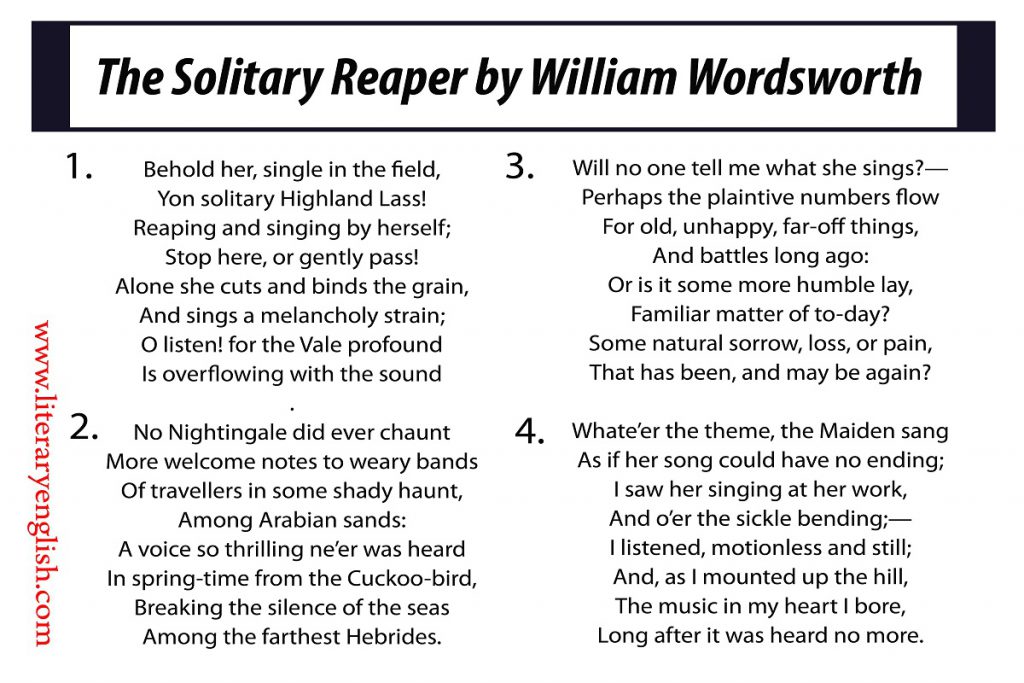 About the poet William Wordsworth

William Wordsworth (1770-1850) was a romantic poet. He wrote poetry with full of imagery, usually based around the natural world. His poetry is mostly subjective like other romantic poets.  He lived during the era of French Revolution which he supported at start but became against later on. Some scholars advocate that relationship of Wordsworth with his sister, Dorothy was far from plutonic love. But Wordsworth did marry and lived with both his sister and wife. Samuel Coleridge, a best friend of Wordsworth, was a great poet of the romantic era. He was contemporary poet who accelerated his romantic vision. Both were true lovers of nature and they were active members of Romanticism Movement.

Introduction to the poem The Solitary Reaper

The poem Solitary Reaper is a pure pastoral poem written in a rustic setting. This poem reflects a beautiful reflection of the nature. In this poem, poet sees a Highland girl singing and cropping in a field. The poet was surprised by her song that was sweet than the songs of nightingale and cuckoo-birds. The soothing effects of the songs are much pleasureable and leave an unforgetable imapcts on mind and heart of the poet..

The poem opens with beautiful scene with full of imagery. First stanza of the poem reveals true dipiction of a pastoral/rustic setting. Being a romantic poet of  the nature, Wordsworth depicts a beautiful picture of the nature where a Highland girl is singing and reaping in the field that shocks the poet and made him to stop for a while to ponder on hidden beauty and music of the nature. The girl is reaping the crop and singing a malencholy song. The poet’s heart throbs with a feelings of joy by this beautiful scene and music of the song sung by Highland girl. He does not like to disturb the girl and does not let her know that someone is passing by her or observing her so that’s why he says to the passers-by either to stop there for a while or to pass gently from there without making noise.

The word solitary clearly explains that girl is alone in the field and there is no one to disturb her. The Highland girl is cutting and binding the crop keeping herself busy in singing a song. This beautiful song is like a malencholy but the poet is unable to understand it clearly. Though poet like it very much and wants everybody to listen to it. The sweet music of the song is echoing in the whole valley.

The song of the solitary reaper was really very sweet and charming. In second stanza, poet compares the singing of the girl with nightingales and cuckoo-birds. In poet’s openion, the nightingale is famous for its singing specially when tired travellers are taking rest in the Arabian desert at an Oasis, and enjoy the music of nightingale. Here poet wants to clear that the music of girl’s singing is much soothing than the nightingales. The song of the gilr is giving much comfort than that of nightingale. Poet clearly states that no nightingale could have sung so nicely as the Highland reaper sang.

After making it clear that the song of the girl is sweet than that of nightingale, poets also makes another comparison that the songs of cockoo-birds are also less sweet than the song of solitary reaper. The  poet says that singing of the girl is more thrilling than the cuckoo-birds which breaks the silence of the seas among the faraway Hebrides by its sweet songs. The cuckoos sing welcome songs to welcome the sailors in the Hebrides islands in the north east. Their songs are also very sweet like the music of the nightingale. But, according to the experience of the poet, the song of the solitary reaper seemed sweeter than the songs of the cuckoo-birds.

The poet couldn’t understand too much about the theme of the song what she was singing. But whatever was the theme of the song, it affected poet’s heart deeply and he enjoyed the song heartily. The poet thinks that like her work, her song seemed endless and there is no end to the Highland girl’s singing. The poet watches her singing and using the sickle to do her work at the same time in the field. The poet says that he listened to her  song standing quietly for a long time without making any kind of movement and noise. When the poet climbed up the hill he says that, he still remembered the sweet music of the girl’s song. The poet also says that he will always remember her singing and will keep it in his heart though he could no longer hear it.

Analysis and Critical Appreciation of The Solitary Reaper

Williarn Wordsworth made The solitary Reaper a real figure through his unmatchable expressions. The spontaneous overflow of powerful feelings arising from emotions recollected in tranquillity makes the readers to feel that they have met with the solitary reaper somewhere in their life, or they will meet her soon.In the poem, Wordsworth describes the melodious song of a solitary reaper who is cropping and singing. The poet finds her song to be sweeter than the song of the nightingale anmd cockoo-birds. The song of the nightingale and the cuckoo are pleasant and provide refreshing and soothing effects. The poet compares and establish a fact that the song of the solitary reaper is simply incomparable in its music melody, in soothing effects, and in sweetness.

The words of the poem are uncomprehensible for the poet but he like the song. Its plaintive tone and melancholy sound touches his heart deeply. he puts forwards a few rhetorical questions to show his curiosity. He asks if someone who can comprehend the meaning of the song, tell him. he guesse the theme of the song and says that it may be from past battels or from the personal life of solitary reaper. The girl’s song made a great impact on the poet’s mind and heart that makes the incident a memorable one. He stands still, motionless for a long time listening to her song and carries it in his heart. The song stays with the poet as a pleasant memory and can be heard after it is heard no more.

The Solitary Reaper uses a simple language and meter as well as natural theme with rustic setting. The poem is full of imagery and symbols. The poet reflected his belief in the importance of the natural beauty of the universe.  This poem, The Solitary Reaper, highlights his definition of poetry to be ‘a spontaneous overflow of powerful feelings’ from the poet and the readers’ part.

Structure and Rhyme Scheme of The Solitary Reaper

The poem, the Solitary Reaper, consists on four stanzaa. Each stanza is comprised of eight lines and all lines are equally distributed among the four stanzas. The rhyme scheme of each stanza follows as ABABCCDD. The perfection of tyhe poem lies  in use of end rhymes, such as “profound/sound”, “still/hill”, “lay/day” and “grain/strain”.

Imagery in the Poem

The poem is full of imagery like all other poems of the William Wordsworth. The imagery used in the poem enables the readers to perceive things involving their five senses e.g., “reaping and singing by herself”, “I saw her singing at her work” and “More welcome notes to weary bands” gives a pictorial description of the young solitary reaper at work. William Wordsworth makes the readers visualize what he has seen and how he felt.

Rhetorical Questions in The Solitary Reaper

The rhetorical question helpsthe readers to ponder on some fact to deduct a conclusion or to clear a point clear. Aa in the poem, Wordsworth asked some rhetorical questions: “Will no one tell me what she sings?”, “That has been, and may be again?” and “Familiar matter of to-day?”. By these questions, poet expresses his curiosity over the theme and meaning of the song, the girl sang and involves his readers too in his curiosity.

Major Themes in The Solitary Reaper

Throughout Wordsworth’s work, nature provides the ultimate good influence on the human mind. Wordsworth repeatedly emphasizes the importance of nature to an individual’s intellectual and spiritual development. A good relationship with nature helps individuals connect to both the spiritual and the social worlds. This poem also carries a clear picture of nature that appeals human minds. William Wordsworth praised the power of the human mind. Using memory and imagination, individuals could overcome difficulty and pain. For instance, the Speaker in “The Solitary Reaper” relieves that he has remembered the song in his memory but could not hear it anymore.

What is Metaphysical Poetry?

What is Iambic Pentameter?

What is Heroic Couplet?