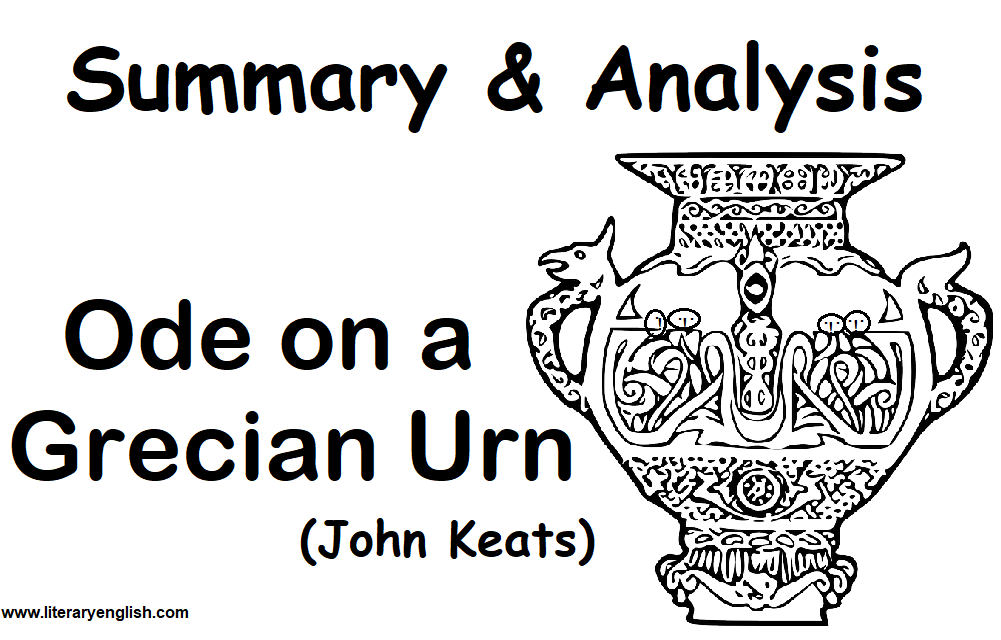 Introduction to the poem:

Ode on a Grecian Urn, written by John Keats, is a romantic poet of the 19th century. The poem elaborates the pictures on a fancy pot of ancient Greek. The Urn was placed in the British Museum, and Keats found it attractive to write an ode because of its beautiful shape and unique pictures.

What does an Ode on a Grecian Urn mean?

Meaning of title holds a unique position when it comes to an understanding the poem’s central idea. Ode on a Grecian Urn is all about the beauty and expressive nature of the Greek Pot. However, the word Urn or Pot has not been used in the whole poem, but all stanzas are about it. Grecian Urn is an immortal and ageless beauty that will always be here when we might die. When we see the word Grecian, it belongs to ancient Greek, not the modern one. So the Grecian Urn is about the culture and traditions of old Greek.

Structure and rhyme scheme of Ode on a Grecian Urn

Summary of Ode on a Grecian Urn:

Ode on a Grecian Urn is significantly about the Urn, which is in ornamental ways use to preserve the ashes of a beloved person or for wine mostly of identical shape. An urn is a work of art, and Greek Urn in basis has been known for the outstanding pictures adorned on its sides. The first four stanzas of the poem consist mainly of the description of such things, and he defines the painted sides of imagined Urn.

Keats is looking at the Urn that depicts to hold on to different scenes. He is fascinated by how the images on Urn are captured a single moment there. There is silence and not moving forward in time. The first picture is about the boys chasing some girls naked (nakedness was the culture of ancient Greek). It is telling us about the sexual tension between them. The second picture is about a man and woman lying under a tree, and the man is playing music. The man is frozen in time, and Keats found it more attractive as heard melodies are sweet, but those unheard are sweeter. They are captured in their youth, and the girl will always stay young.

He reminded us about love which will always remain green just like the leaves of trees as time has stopped for them. According to Keats, the heard music is beautiful, but the unheard is sweeter. In the Urn, a man was singing a pipe song without being tired. At that time, he did not attend the song, but he felt the sensation and beauty of pipe music. It was like the love of a young man, which never cools down. A town was emptied, and the people gather on a mountain. They were there to see the sacrifice, which is discussed in the 4rth stanza. The city will always remain empty, as the painter had captured that moment when people were on the hilltop. Even when we die, the paintings of branches, maidens, and weeds will never get rotten because they have been frozen for the eternity.

Themes in Ode on a Grecian Urn:

Ode on a Grecian Urn theme of time is all about time can freeze in art, and Keats has shown in his poem Ode on a Grecian Urn. The pictures in which boys were chasing girls, two lovers were sitting under the tree, the emptied town will be left empty, and the eternal love between two young lovers was captured by the art in the form of images. Time has seized the young lady who will never get old and for the leaves that will always remain green.

The central theme of Ode on a Grecian urn is that art is immortal. Keats describes in his Ode on a Grecian Urn that we are mortal, but art is not. Art will tell about our traditions, customs, and the beauty of time, which we experience in our era to subsequent generations. Art will always be here, just like the ancient Urn telling about the old Greek to the speaker admiring its uniqueness in the poem.

Art is always beautiful because of its permanence and immortality. Once a painter paints a picture, it will be unchangeable as it shows his thoughts and the viewers’ opinions. The lovers under the tree, pilgrim, images of maidens, and other creatures were present on the Urn unchanged. Although years have passed, time has not lessened the beauty of that Urn as art is immortal, which makes it beautiful.

Literary devices used in Ode on a Grecian Urn:

Poets use literary devices to convey their thoughts, ideas, emotions, and beliefs more clearly to the reader. In Ode on a Grecian Urn, Keats also uses literary devices like imagery, personification, and others to make the text appealing.

Keats uses consonance in some lines to make phrases attractive, which appear at the beginning, center, or end of lines. For example

Ø  For ever panting, and for ever young;

Ø  All breathing human passion far above

Ø  Will silent be, and not a soul to tell

The /i/sounds in words “will” and “silent” are the same, which shows the unity in the poem Ode on a Grecian Urn.

When two or more vowels repetition occurs in the same line, it’s called assonance; in Ode on a Grecian, Urn Keats uses assonance in several lines. For example:

The vowel /O/ in this line is representing assonance.

Ø  What pipes and tumbrels? What wild ecstasy? (/I/ is assonance in this line)

To create a link between nature and humans, Keats uses symbolism to mark that beauty becomes immortal when connected to nature. For example:

Ø  The Pipe is given the quality of ghost in line “Pipe to the spirit ditties of no tone: and the music is being played without any sound.

Ø  The Urn is given the qualities of life, time, and beauty.

Ø  Trees, plants, and leaves are symbolized as a youth as they are painted on the Urn in the spring season when they were green and flourished.

Keats is calling Urn from afar the museum of Britain. The Urn was not present at that time when Keats was writing this Ode which shows the presence of Apostrophe in it. The second time Apostrophe device is used when the speaker hears the unheard music. We can see the Pipe in the picture but can’t listen to it, while the speaker enjoyed the music when he watched the Urn in the British Museum.

Iram Tariq is a passionate writer and has been writing since 2018 on various niches. She wrote the article ‘Summary and Analysis of Ode on a Grecian Urn by John Keats’. Her main interest for writing is literature, moreover she also writes business articles. She also provides literary analysis on various literary pieces for helping students.