Summary and Analysis of Ode to a Nightingale by John Keats 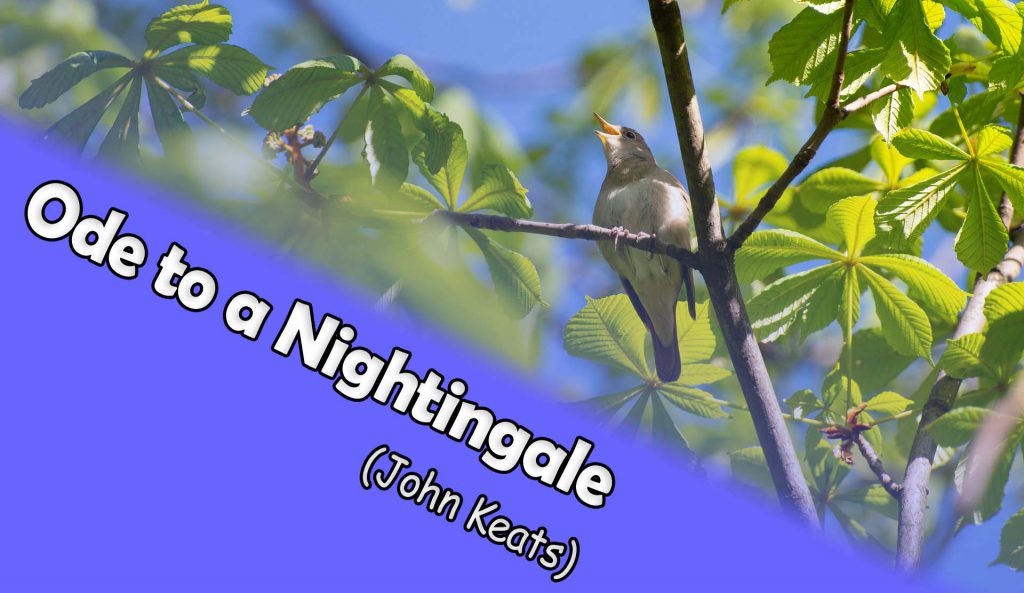 Introduction to an Ode to a nightingale by John Keats:

The Ode to a nightingale is one of the great Ode of Romantic poets. John Keats’ ode to a nightingale is comprised of 8 stanzas. It was composed in just one day in May 1819 and published in July 1819 in “the Annals of the Fine Arts,” a quarterly magazine. Keats was inspired by a nightingale whose nest was built near the house of Brown, which they shared in spring. One morning, Keats sat under a palm tree and wrote this ode when he heard beautiful singing of a nightingale. Ode to a nightingale’s tone is melancholy surrounding between mortal and immortal poetic imagination to fly from the world of miseries. It was also published in a volume along with Lamia in 1820.

What is an ode in literature?

An ode is a type of lyric poem, which means that it expresses thoughts and feelings. These feelings are often intense and deeply personal. This particular poem comes from the romantic tradition.It certainly does not mean flowers and chocolates on Valentine’s Day or anything to do with romantic love at all but rather a set of core beliefs surrounding the relationship between the poet and the whole world around him.

Background to the Ode:

This poem was written in the 19th century when John Keats lived with his friend Brown in the same house. Ode to nightingale focuses on death because Keats’s mother Francis Jennies and his younger brother Tom died of tuberculosis. He was also diagnosed with tuberculosis as it was an incurable disease at that time. When John Keats found the secret of mortality, he started to explore nature more deeply. This poem was also a romantic poem when John Keats got tuberculosis (Fanny Brownie, his beloved one) left him. That’s why we found loneliness, misery, and sorrow in this poem.

The only characters are the speaker and the nightingale. The bird receives human traits in the poem and represents nature and death. While standing in the dark forest, he creates an imaginary link of nightingale with death, beauty, human suffering, and spirit.

Summary of Ode to a Nightingale:

The poem describes the speaker’s sentiments when standing in the dark woodland. When he hears the beautiful singing of the nightingale bird, he feels shins of sorrow in his ears. It prompts the speaker to reflect profoundly and meanderingly on time, mortality, nature, beauty, and human suffering. He appears to be leaving the physical world and entering a new realm of imagination. He feels numb from the bird’s song as if he’s taken some drugs. In the beginning, the music comforts him. He even thinks that poetry will metaphorically bring the speaker closer to the nightingale. He wishes for a draught of vintage to accompany him and the nightingale into a fantasy world. Where, like the nightingale, he can become ignorant of all the sufferings of the real world. The speaker is not sure if the entire incident was a “vision” or a “waking dream.”

Themes of Poem Ode to a Nightingale:

The main themes of Ode to a nightingale are death, mortality, immortality, nature, human suffering, and poetic imaginations. According to him, death is the end of all people, which is unavoidable, is the poem’s central theme. The theme of mortality in Ode to a nightingaleis linked with immortality as man is mortal. If he wants the best survival, then nature’s lap is the best place to live. Man always suffers on this earth, and the poet wants to be free from all miseries, just like the nightingale.

Literary Devices in Ode to a Nightingale:

Poets use literary devices to convey their thoughts, ideas, emotions, and beliefs more clearly to the reader. In Ode to a nightingale, Keats also uses literary devices like are imagery, personification, and others to make the text appealing.

Ode to a nightingale contains plenty of imagery in the form of different terms like embalmed, Lethe, darkness, requiem, plaintive anthem, and tolling bell.

Anaphora is used for the sentences that use the same initial word or phrase in a sequence: the word “Where” is repeatedly used in the poem.

Ode to a Nightingale Rhyme Scheme and Structure:

The rhyme scheme of Ode to a nightingale is ababcdecde primarily used in all modes of that time. The ode contains eight separate stanzas, each of which is ten lines. And the meter of each stanza is an iambic pentameter except for the 8th line of stanza. The eighth line is written in iambic with too many prefixes. As a result, there are only six syllables per line rather than ten.

What is the Purpose of Ode to a Nightingale?

Ode to a nightingale presents the conflict between pain and joy, life and death, mortality and immortality, and, actual and vision. The main thing which John Keats conveys to the readers is that humans are mortal. The only way they can find immortality is to observe nature. In this poem, he sat in a dark forest and experience a new world that you can never see in the crowd. Only soul can bless you the immortality, and you can experience great things. Life is full of miseries, but you can escape from them when you sit quietly to observe other creatures of nature.

Iram Tariq is a passionate writer and has been writing since 2018 on various niches. She wrote the article ‘Summary and Analysis of Ode to Nightingale by John Keats’. Her main interest for writing is literature, moreover she also writes business articles. She also provides literary analysis on various literary pieces for helping students.