Summary and Analysis of Daffodils by William Wordsworth 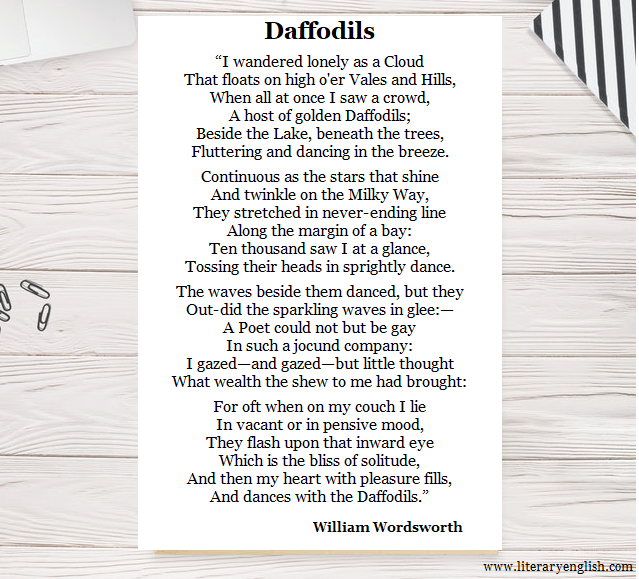 Text of the Poem | Daffodils by William Wordsworth

I wandered lonely as a cloud

That floats on high o’er vales and hills,

When all at once I saw a crowd,

A host, of golden daffodils;

Beside the lake, beneath the trees,

Fluttering and dancing in the breeze.

Continuous as the stars that shine

And twinkle on the milky way,

They stretched in never-ending line

Along the margin of a bay:

Ten thousand saw I at a glance,

Tossing their heads in sprightly dance.

The waves beside them danced; but they

Out-did the sparkling waves in glee:

A poet could not but be gay,

In such a jocund company:

What wealth the show to me had brought:

For oft, when on my couch I lie

In vacant or in pensive mood,

They flash upon that inward eye

Which is the bliss of solitude;

And then my heart with pleasure fills,

And dances with the daffodils.

Summary and Analysis of Daffodils by William Wordsworth

“I wandered lonely as a Cloud”

About the poet William Wordsworth

William Wordsworth (1770-1850) was a romantic poet. He wrote poetry with full of imagery, usually based around the natural world. His poetry is mostly subjective like other romantic poets.  He lived during the era of French Revolution which he supported at start but became against later on. Some scholars advocate that relationship of Wordsworth with his sister, Dorothy was far from plutonic love. But Wordsworth did marry and lived with both his sister and wife. Samuel Coleridge, a best friend of Wordsworth, was a great poet of the romantic era. He was contemporary poet who accelerated his romantic vision. Both were true lovers of nature and they were active members of Romanticism Movement.

Introduction to the poem Daffodils

The lyric poem “I Wandered Lonely as a Cloud” also known as Daffodils was written by William Wordsworth. It is one of his best lyric poems in modern times. In the poem Daffodils, William words worth reports a scene which he got an opportunity to have a look at valley that was full of huge number of daffodils. This lyric poem consists of four stanzas; each stanza consists of six lines. Each line of the poem is metered in an iambic tetrameter. The rhyme scheme “ABABCC” was followed in the poem. As he loved nature so the main theme of the poem is also the beauty of nature. The use of figurative language made it much appealing to the readers. The poem is subjective because it expresses the feelings of the poet himself; one of the key characteristics of Romanticism.

Summary of the Poem Daffodils

The poet narrates an incident that occurs when he was wandering aimlessly like a cloud over the hills and valleys of the mountainous Lake District in England. During wandering he catch a sight of huge numbers of daffodils that make him surprised. He was a lover of nature and such scene was fascinating for him. He uses beautiful imagery to describe the scene. He Uses word crowd for huge number of daffodils and he himself calls a host. He personifies flowers and makes them able to dance like human and uses word flutter as butterflies do. Actually that day, there was wind blowing that was moving them as they were dancing and fluttering. He describe a landscape view in a beautiful way that portraits valleys, lakes, tress, flowers and clouds.

Second stanza opens with a Simile. He compares flowers with stars and crowd of flowers like a galaxy of stars. He says flowers are looking like stars shining in the Milky Way. He compares fluttering of flowers as a twinkling of stars.  Poet uses word “never-ending line” means the flowers were visible as far as the poet’s eyes could see alongside the shore-line of a bay. Using hyperbolic language he tells us the quantity of flowers as they were ten thousand in one sight. That shows that the he has never seen so many flowers at once. At the end of second stanza he again used word dance to personify flowers.

The flowers in the bay were dancing and looking gleeful at the atmosphere.  Being a lover of nature, poet says that a poet like Wordsworth cannot help being happy with such cheerful companion like the daffodils, so he was gazing continuously at the daffodils and enjoying their beauty. He used word ‘gazed’ twice that indicates how flowers moved or charmed him. So poet gazed at flowers for a long time, forgetting his surroundings. At present, poet did not think much about the ‘wealth’ that the daffodils had brought to him but he realized it later. This ‘wealth’ is the happiness he got from the scene of daffodils and the pleasant memory that he enjoyed for a long time since the day.

He starts fourth stanza with word ‘For’, to continue his logic for saying that the daffodils had brought him ‘wealth’. He explains that why the scene of the daffodils became so significant for his life. Whenever he goes to his bed in a free time or he is in thoughtful mood, the flowers blaze upon his inner-eye and took him to imagination. The flowers became an interminable memory for Wordsworth. The poet calls it ‘a bliss of solitude’, a blessing of staying lonely. Whenever he sees daffodils in his imagination, his heart fills with happiness and dancing daffodils makes his mind dancing in same way.  This indicates the intense feelings of a romantic poet. He has been able to portray the scenery and express his mind so brightly in vivid language and simple form that appeals the readers.

Critical appreciation of the poem

This poem is a depiction of beautiful nature. This is one of the most famous poems of Romantic Movement written by William Wordsworth. Being a lover of nature, Poet reveals feelings of a scene of huge number of daffodils by a lake that made him surprised. The imagery in simple wording and couple of similes made it one of the best poems of romantic era. His way of personifying flowers is most attractive way of writing poetry. The plot of the poem is very simple and unified to a single theme. The memory of this beautiful scene comforts him whenever he is lonely. The age in which he lived was the period of French Revolution. At start, he was in support of it but later on he became against it and became depressed by it. So he tries his best to keep himself happy. So in this context, poet says that the memories of beautiful flowers keep his mood fresh when he is lonely. This indicates the intense feelings of a romantic poet. The hyperbolic language made it more attractive when poet says:

“Ten Thousand I saw at a Glance”

The word ten thousand is used in hyperbolic sense. The word He used for himself “cloud” is also much appealing to the readers. The word flutter, tossing, and dancing are also examples of beautiful personification. So the entire poem is beautiful depiction of nature with full of figurative language.

Theme of the poem Daffodils

The poem Daffodils is the depiction of natural beauty. As William Wordsworth was a poet of romantic era; he depicts beauty of nature in his poem using beautiful imagery and language full of figurative tools. He personifies beauty and use couple of similes to make the wording appealing. He, with his contemporary, Samuel Tailor Coleridge, started Romantic Movement and this poem is the true example of his romantic love towards nature.

The poem Daffodils is full of figurative language. The poem opens with a simile by a metaphorical comparison of poet to a cloud. He personifies flowers by using words dancing, fluttering, and tossing. He used hyperbolic language by saying ten thousand flowers. In the whole poem he describes flowers like living beings that dance and toss their head. He calls these flowers fluttering as the butterflies do.

What is Metaphysical Poetry?

What is Iambic Pentameter?

What is Heroic Couplet?