Structuralist Analysis of "Fire and Ice" by Robert Frost 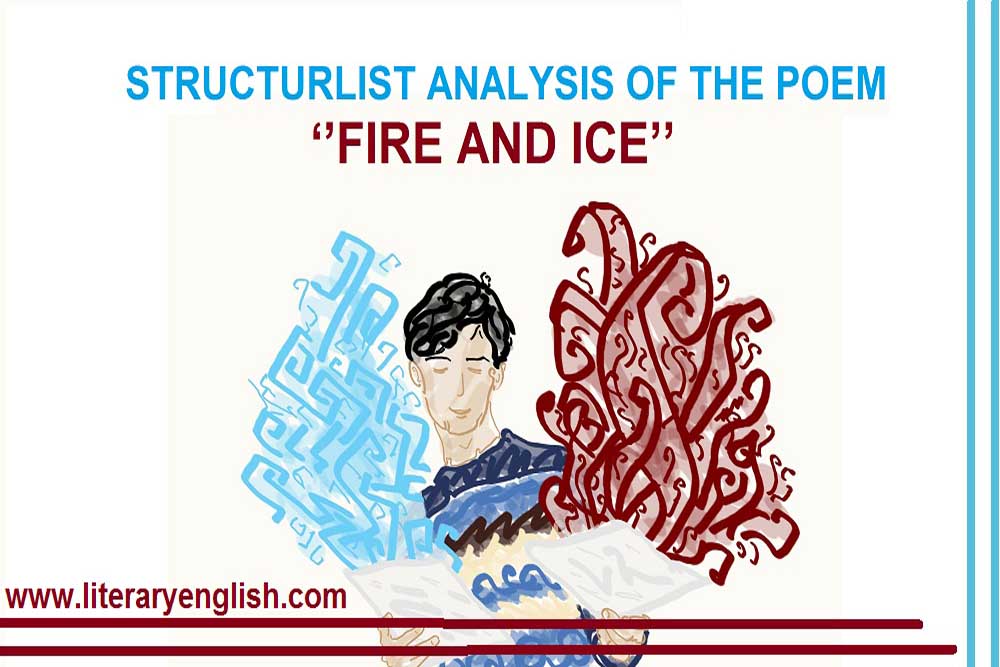 STRUCTURALIST ANALYSIS OF THE POEM ‘’FIRE AND ICE’’

The poem ‘’FIRE AND ICE’’ is a well knitted epigram written by Robert Frost. After the great destruction of world war 1st the question regarding the end of the world appears in every one’s mind in different way. This poem is about a question of how the world will come to an end, either by fire or by ice. The poem is a real piece of act and fancy. Laconic style of writing makes the poem factual and scientific. Fire represent desire and ice is equated with hate, both are antithesis to each other. Both are the elements of nature but there characteristics are opposite and poles apart.

The structure of the poem is described in a descriptive way, the tone of the poem is very simple but the underlying message is serious. Poet uses literary devices and proper punctuation, which gives a very beautiful rise and fall to the poem. To enrich and enhance the meaning of the poem fire and ice are used as a symbols and also act as a personification.

Parallelism is used in the first two lines of the poem ‘’some say the world will end in fire / some say in ice’’. In the same line fire and ice is used as a symbol of desire and hatred. These symbols having the surface and deeper meaning, and are antithesis to each other. Fire is the antithesis of ice. Allusion is also used here, by using fire he is alluding about global warming and ice is a reference towards ice age. The words like fire, desire, perish, destruction, ice, hate and great makes a horrible and pessimistic image in mind.

Poem begins with ‘’some say’’ which means that a group of people is of the opinion that the world will come to an end either by fire or by ice. Poet is having the opinion that the world will end by human desires, but then in the ending lines of the poem he says that ice also has the power to cause an end to the world. ‘’And would suffice’’ directly contrast the preceding lines which shows the power of hatred and its destructive ability. It means that the poem is not concluded entirely.

Phonological / Syntactic Analysis of the Poem

Phonological features are used in the form of alliteration, assonance, and consonance.

‘’From what I’ve tasted of desire

I hold with those who favor fire’’

/f/ sound is used as an alliteration. There is also repetition of vowel sound /o/ in the same line.

/t/and /n/ sound is used as a consonance, ‘’I think I know enough of hate / To say that for destruction ice.’’

Syntactic Analysis of Fire and Ice

The pattern of the poem is arranged in such a way that the words and sentences gives clarity and consistency. Poet uses right choice and proper arrangement of words and phrases that makes the way easier to reach to intended meaning of the words. In every line grammar is used according to the need of the sentence.