Summary and Analysis of The Painter by John Ashbery

Introduction to the Poem | “The Painter”

The Painter by John Ashbery is a beautiful literary work published is 1956. It is one of the finest pieces of art in English literature. The poem basically describes the communal and traditional beliefs of the society, because of which they cannot accept change and have put restrictions of the freedom of art. The poet is not just talking about painting but is talking about art in all its forms. The conventional artists and the modern writers are stuck between their ideas and the norms and values of the society. They are cursed and rejected by those who belong to the old school of thought. 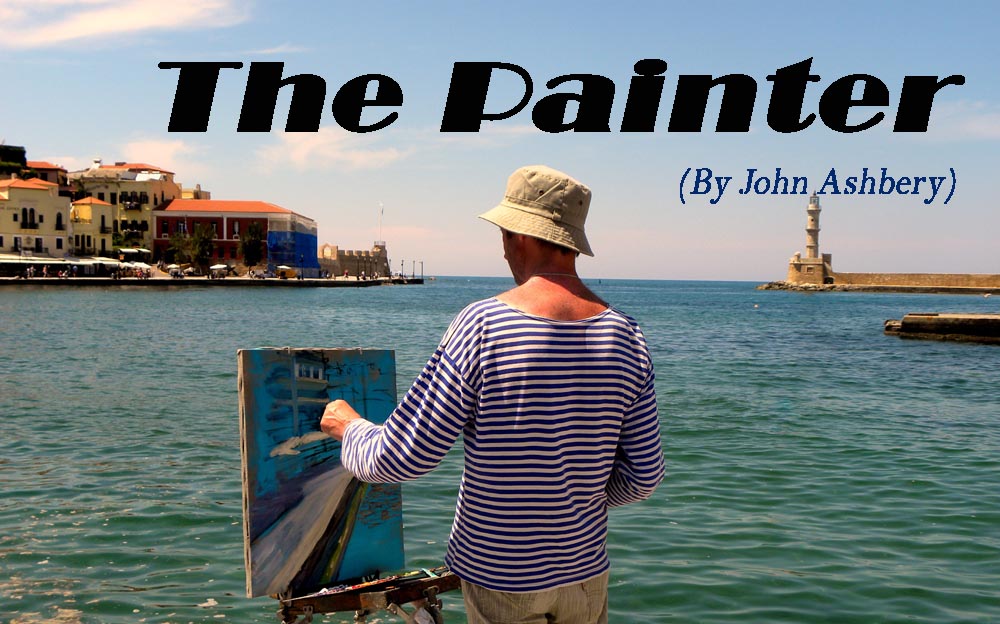 TEXT OF THE POEM | THE PAINTER BY JOHN ASHBERY

Sitting between the sea and the buildings

He enjoyed painting the sea’s portrait.

But just as children imagine a prayer

Is merely silence, he expected his subject

To rush up the sand, and, seizing a brush,

Plaster its own portrait on the canvas.

So there was never any paint on his canvas

Until the people who lived in the buildings

Put him to work: “Try using the brush

As a means to an end. Select, for a portrait,

Something less angry and large, and more subject

To a painter’s moods, or, perhaps, to a prayer.”

How could he explain to them his prayer

As if, forgetting itself, the portrait

Had expressed itself without a brush.

Slightly encouraged, he dipped his brush

In the sea, murmuring a heartfelt prayer:

“My soul, when I paint this next portrait

Let it be you who wrecks the canvas.”

He had gone back to the sea for his subject.

Imagine a painter crucified by his subject!

Too exhausted even to lift his brush,

He provoked some artists leaning from the buildings

To malicious mirth: “We haven’t a prayer

Now, of putting ourselves on canvas,

Or getting the sea to sit for a portrait!”

Others declared it a self-portrait.

Finally all indications of a subject

Began to fade, leaving the canvas

Perfectly white. He put down the brush.

At once a howl, that was also a prayer,

Arose from the overcrowded buildings.

They tossed him, the portrait, from the tallest of the buildings;

And the sea devoured the canvas and the brush

As though his subject had decided to remain a prayer.

Summary of The Painter By John Ashbery

A painter is sitting between a sea and some buildings. He wants to draw a portrait of the sea. He expects the sea to bring up sand to him, take the brush from his hand and paint the portrait itself but it is nothing more than a child’s wish.

The painter is incapable of portraying the beauty of nature on his canvas so he is sitting there, trying to figure out what to do until the people living in the buildings ask him to paint something that is of some use. They tell him that the subject that he wants to paint is endless and complex. They ask him either to choose a subject that is easy, traditional and possible or just keep praying.

The painter is incapable of explaining it to those superficial and lazy people in the buildings that it is nature and feelings that can bring life to a canvas, not the old traditional superficial ideas of theirs. He then gives up on the sea and chooses his wife as the new subject for his portrait. He tries to make a beautiful portrait of her, as beautiful as ruined buildings but he gives up on that as well. He failed to draw a portrait of his wife too. He felt as if he had forgotten to draw at all.

He gathers up the courage again and dips his brush in the sea. He prays in his heart and ask the sea to fill the portrait with itself on it when he starts painting. The news of him changing his subject back to the sea has spread like a forest fire among the people of the buildings.

Imagine those people who were killed for their innovative and creative ideas.

He now is too tired to lift his brush up anymore. This provokes his contemporaries in the buildings. They tell him that they do not wish for anything like him. Neither do they want to bring the element of nature onto their canvases nor do they want the sea to draw its own portrait for them.

Finally his wish for creating something new fades away. He gives up on drawing anything on the canvas at all. He puts his brush down and screams so loud that it goes up to the skies.

The people in the buildings have succeeded in discouraging him. They throw the canvas and the brush in the sea and his wish to portray the sea remains a prayer only.

Note: Allegory is a story, picture or poem which has a hidden story in its surface story.

Genre of the poem is very typical like most of Ashbery’s poems. “The Painter” is an allegory, a symbolic fictional narrative, where there are people criticizing a painter’s decision, who is sitting between a sea and the buildings. It is an allegory because the story of the painter in the poem is actually the story of all the artists, even poets, who try to come up with something new and creative but are criticised and even crucified by their contemporaries.

Characters in the poem are the people in the buildings and the painter while the setting is the sea shore.

Crucification: The act of killing someone by fixing that person to a cross and leaving him or her to die.

“The Painter” has seven stanzas in total. First six stanzas consist of six lines each while the last stanza has only three lines. The last stanza is the conclusion of the over all poem. The poem also has an irregular rhyme scheme.

Themes in The Painter By John Ashbery

The Painter, when analysed in depth, comprises of many themes, the major of which is innovation versus traditional beliefs. Other than that, we can also see the themes of nature and art, envy and human desires versus obligations in the poem.

Until the people who lived in the buildings

Put him to work: “Try using the brush

As a means to an end. Select, for a portrait,

Something less angry and large, and more subject

To a painter’s moods, or, perhaps, to a prayer.”

Here in these lines the society is imposing the dark traditional beliefs that they believe in on the painter who wants to create something new, something different. The people in the buildings are not ready to accept the change and are asking the poet to stick to the old traditions and stop implementing new ideas. The poet is trying to convey the idea that human beings hesitate to take risks. They’d rather stick to the their traditions instead of surpassing their limitations.

The theme of envy can be seen in the poem where the people in the buildings are convincing the painter not to try something new. Instead of putting efforts in their work, they are jealous of the painter. They don’t want him to excel in it.

Nature and art go side by side. Art without nature is like a body without soul. In the following lines;

How could he explain to them his prayer

The painter thinks about how art, without the element of nature in it, can ruin his canvas. He thinks of explaining it to the people criticizing him that it is the nature that brings life into the canvas, art alone is incapable of doing that.

Human desires are often overruled by the obligations that the society bounds us by. We tend to sacrifice our wishes and desires just because the society does not approve of it. In the third stanza;

Symbolism in The Painter By John Ashbery

Symbolism is the use of an object, person or a place to represent something else. We can see many examples of symbolism in the poem.

The sea symbolises the creative ideas and the innovations in art that an artist comes up with but are not accepted by his contemporaries who are stuck in the dark world of traditions.

• The Tall Buildings and the people living in it

The buildings in the poem symbolises the old traditional beliefs and the people living in it symbolises the communists, the contemporaries, the political groups and the religious groups, who are holding on tightly to those beliefs. They find it easy to follow those before them and are not willing to accept change. They try their best to discourage those who intends to create something new.

The brush in the poem symbolises a source of changing the old mind-set of the people.

The painter in the poem symbolises the artists, the poets and the writers who tries to create something new, something creative but are criticised by the society for doing so, due to which they fail to do what their hearts desire.

Poetic Devices in the Poem “The Painter”

There are a variety of poetic devices used in this poem which gives it that beautiful dramatic effect that we look for in poetry. The poet has used simile, alliteration and personification in the poem.

Simile is the comparison of two unlike things by using like or as. In the following lines

The poet has compared the image of his wife, that he plans to create, to the ruined buildings.

Another example of simile can be seen in the line

Here, Ashbery has compared the news of changing his subject back to sea to a wildfire.

Alliteration is the repetition of first sound of words closely placed in a line.

For example, the sound of S is repeated in the following lines of the poem.

“Sitting between the sea and the buildings”

“Is merely silence, he expected his subject”

“To rush up the sand, and, seizing a brush,”

The sound of P is repeated in the following line

And the sound of M is repeated in the line

“To malicious mirth: “We haven’t a prayer”.

Personification is giving human attributes to non human things. In the first stanza

He expected his subject

To rush up the sand, and, seizing a brush,

Plaster its own portrait on the canvas.

The poet expects the sea to hold the brush itself and paint its own portrait on the canvas.