Summary and Analysis of Melodic Trains by John Ashbery

Introduction to the Poem Melodic Trains

Melodic trains, by John Ashbery, was published in 1976 and is one of the most fine pieces of art where the poet has described the philosophy of life in depth. The poem is about poet traveling in a train along with a little girl and other passengers. Poem reflects on how the journey takes twists and turns and how inconsiderate we are to the other human beings. The poem, ironically, can rightly be called a pessimist view on life, where every other person is sad and each new phase creates unrest and disturbance in the hearts regardless of how beautiful the outside world is, which is totally opposite of what the title suggests. 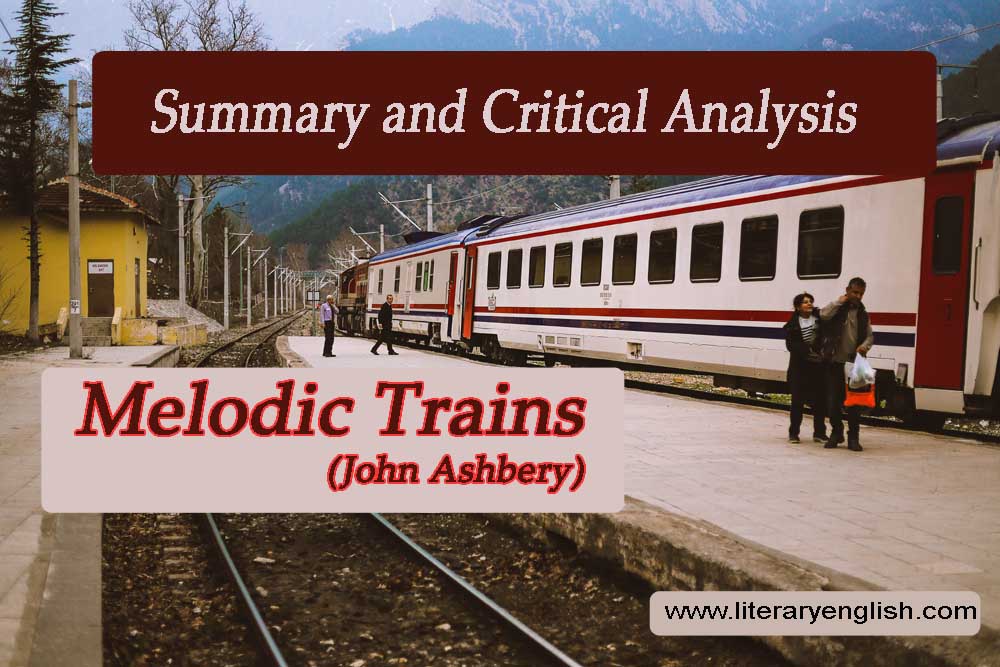 Text of The Poem | Melodic Trains By John Ashbery

She’s wearing, for fun. And it is fun to wear other

Odd things, like this briar pipe and tweed coat

Sketched in and plunging now and then into unfathomable

Sitting inside it—me, and just as our way is flat across

Guided by a ruler held against a photomural of the Alps

We both come to see distance as something unofficial

And impersonal yet not without its curious justification

Like the time of a stopped watch—right twice a day.

Only the wait in stations is vague and

Dimensionless, like oneself. How do they decide how much

Time to spend in each? One beings to suspect there’s no

Rule or that it’s applied haphazardly.

Sadness of the faces of children on the platform,

Concern of the grownups for connections, for the chances

Of getting a taxi, since these have no timetable.

You get one if you can find one though in principle

You can always find one, but the segment of chance

In the circle of certainty is what gives these leaning

Tower of Pisa figures their aspect of dogged

Impatience, banking forward into the wind.

In short any stop before the final one creates

With ourselves, our lives, the way we have been dealing

With other people up until now. Why couldn’t

We have been more considerate? These figures leaving

The platform or waiting to board the train are my brothers

Panic and disorder in the world, and so much unhappiness.

If I were to get down now to stretch, take a few steps

Summary of The Poem Melodic Trains

There is a little girl sitting beside me. Her nails are painted red. She is asking me about the time, even though she is wearing a watch herself but that is just a toy watch and she is wearing it for fun. It is fun to wear strange clothes like the ones I am wearing right now, the woollen coat and the striped brown shirt, the colors of which are penetrating into the colors of the beautiful indescribable valleys. The journey cannot be easily understood by a person like me. It seems like the train is a pencil, drawing lines on the beautiful mountains of Europe. I and this little girl have come so far only to witness the beauty of these valleys and this is the only thing common between us. This is a fact and it is as true as her toy watch telling the right time twice a day.

It seems pointless and useless for trains to wait on the stations, as pointless as a people themselves are. How do the train decide that it needs to wait for a certain amount of time. Or maybe there is no rule to abide by, but even if there is, the trains do not follow it. The children standing on the train platforms are sad, grownups are worried and concerned about getting a taxi to lead them to their destinations. The taxis, just like the trains, do not follow a proper schedule. One may always find a taxi to get him to his home but that too by a chance of fate. Fate and luck have constricted the circle of faith. It has made people impatient, trying to get things as soon as they can.

The stops before the final stop creates anxiety and regrets. One regrets all the decisions that he had taken in life and all those times when he did not treat people right. He asks himself that why couldn’t I be more kind and patient with people.

All the people who wish to board the train are like my brothers, we share the same feelings, the same panic and anxiety. We go through the same challenges and obstacles, in quest of satisfaction and contentment – only to reach our final destination.

Genre of The Poem Melodic Trains

Melodic trains, like most of John Ashbery’s poems is a narrative poem. It tells the story of a man who is travelling in a train with many other passengers, passing through different places. Like a narrative, there is a setting and there are characters in the poem.

Structure of The Poem Melodic Trains

The poem melodic trains does not follow a proper poetic form. The poem is divided into 8 stanzas, second and seventh stanzas consists of five lines while the rest of the stanzas consist of four lines. The poem does not have a proper rhyme scheme too.

Theme of the Poem Melodic Trains

This beautiful poem by John Ashbery is inspired by Shakespeare’s All the world’s a stage, where the poet believes that we are all merely actors, playing our part in the drama called life, each of us enter and exit at a specified time. John Ashbery has explained Shakespeare’s idea in a very elegant and detailed manner.

The main theme of the poem is the stages of life that every man passes through. The grievances, the anxieties, the worries, the concerns, the companions who come into one’s life, be a part of the journey and leave when they have to. It is about life taking turns and with each turn one’s heart is filled with sadness and regret. This painful journey of life and the endless miseries of existence finally ends with death.

Literature is incomplete without the use of poetic devices. It creates that melodic effect, that beautifies and changes texts from words to pieces of art. Ashbery has used a lot of poetic devices in this poem, including symbolism, metaphor, simile, alliteration, consonance and assonance

Metaphor is comparison of two unlike things without using like or as. In the following lines;

Guided by a ruler held against a photomural of the Alps;

poet has compared the train with a pencil and the beautiful valleys with a photomural. Use of metaphor is very effective here, since it tells us how our lives are constantly being sketched and directed.

Simile is comparison of two unlike things by using like or as. In the lines below;

Only the wait in stations is vague and

poet describes that waiting at different stations after every while is as pointless and purposeless as the people themselves.

Alliteration is the repetition of first sound of closely placed words. Examples of alliteration from the poem are

With ourselves, our lives, the way we have been dealing

In the circle of certainty is what gives these leaning

Concern of the grownups for connections

She’s wearing, for fun. And it is fun to wear other

Assonance is the repetition of vowel sounds in words closely placed to each other, within a line. Examples of assonance from the poem are

Sadness of the faces of children on the platform,

Sound of letter ‘o’ is repeated.

Sitting inside it—me, and just as our way is flat across

Sound of the letter ‘i’ is repeated.

Consonance is the repetition of consonant sounds in words closely placed to each other, within a line. An example of constant from the poem is as follows

Sound of the letter ‘l’ is being repeated.

Guided by a ruler held against a photomural of the Alps

Sound of the letter ‘r’ is repeated.