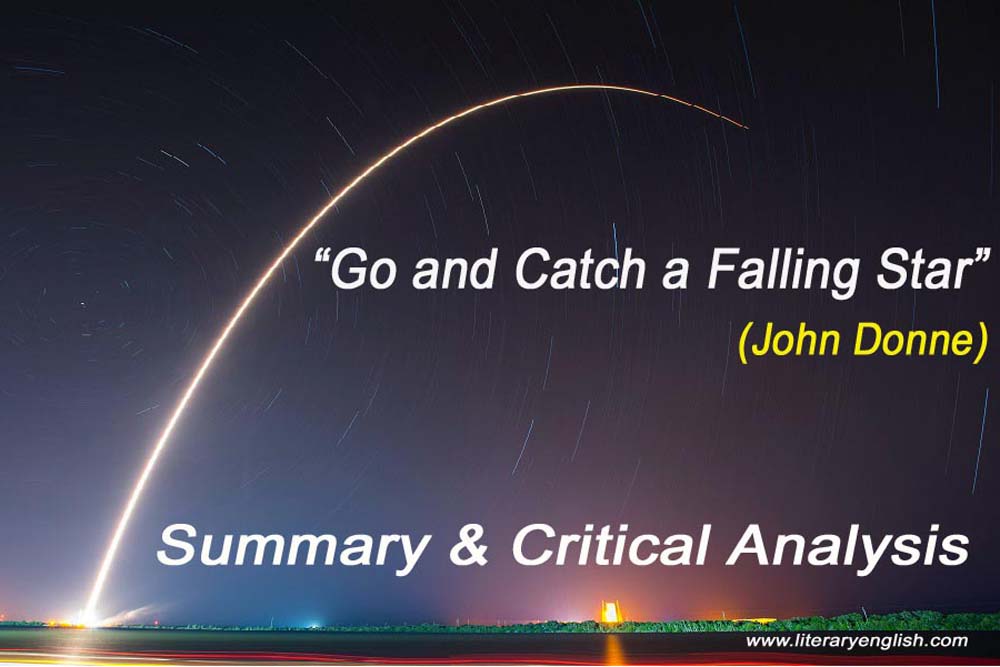 Text of the Poem | Go and Catch a Falling Star

Go and catch a falling star,

Get with child a mandrake root,

Tell me where all past years are,

Or who cleft the devil’s foot,

Teach me to hear mermaids singing,

Or to keep off envy’s stinging,

Serves to advance an honest mind.

If thou be’st born to strange sights,

Thou, when thou return’st, wilt tell me,

All strange wonders that befell thee,

Lives a woman true, and fair.

If thou find’st one, let me know,

Such a pilgrimage were sweet;

Yet do not, I would not go,

Though she were true, when you met her,

And last, till you write your letter,

Introduction to song ‘Go and Catch a Falling Star’:

The song ‘Go and catch a Falling Star’ is one of the famous works by Jon Done because of its title that fascinates and shocks the readers. Use of different contrasts, exaggerations and hyperbolic language make it more interesting for the readers. The theme of this song is on infidelity and inconsistency of woman. It seems that Donne does not believe in love or he experienced something in his past that made him to think so. He argues that a woman cannot be beautiful and faithful at same time. He asks his readers to do some impossible tasks to do and wants to realize that like all other impossible tasks, finding a true and fair woman is also impossible.

Rhyme Scheme and Style of the Song; ‘Go and Catch a falling Star’

The song “Go and Catch a Falling Star” has colloquial style. It is three-stanza poem and each stanza has set of nine lines. The all lines follow a regular pattern of ABABCCDDD. The song contains a strange kind of music in it. The rhyme scheme of the song follows a regular pattern. The first and third line, and second and fourth line, rhyme with each other. The fifth and sixth lines form a couplet that rhymes at last syllables. The last three lines of the song rhyme at the end of each stanza. The last syllable of each line of the stanza is as follows:‘ar’, ‘oot’, ‘are’, ‘oot’, ‘ing’, ‘ing’, ‘ind’, ‘ind’, ‘ind’ that form up a regular pattern.

Tone of the Poet in the Song:

Throughout the poem, Donne changes his tone. Tone of the poem is not constant but varying.  Sometime poet uses a light and humorous tone and sometime the tone is harsh, cruel, and self-pitying. The poet is upset and annoyed by the infidelity and inconstancy of women. The speaker repeatedly uses authoritative and commanding word like Go, Get, Tell, Teach etc. The overall mood and approach of the poet is pessimistic.

Summary of the Song ‘Go and Catch a Falling Star’:

In the song, reader comes to know about belief of the poet regarding fidelity of the women. John Donne tells to his readers that no woman is in the world who is beautiful and faithful at same time.

In the opening lines of the song, the poet gives the reader a numerous impossible tasks to do. These include catching a falling star, who cleft the foot of the devil, where past time goes, how to hear mermaids singing, and remove envy in human being.”

In second stanza, poet says that if someone is born with heroic and exceptional qualities who can see invisible thing and can travel thousand miles day and night until his hair turns grey, he will also fail to find a true and fair woman.

In the last stanza of the song, Donne explains that if someone become successful to find a true and fair woman, he would go to him as a pilgrimage and do anything he had to.

The Poet does not believe it is possible though. In fact, poet argues that one might think they have found a beautiful and faithful woman at that moment but she would eventually turn out to be unfaithful. Because she already betrayed one or two men by love-letter and she might betray him too.

Analysis of the Song

First Stanza of the Song

In the first stanza of the song, the poet asks readers to “Go and catch a falling star.” This song is very famous because of its first line that explode with an abrupt opening with a shock on the mind of the readers. Moreover, following lines carry same impossible tasks i.e. “Get with child,” or impregnate, a “mandrake root.” That strike on the mind of the readers with a strange shock.

All the statements have a magical humor. Because all the task are impossible to do as a human being. No one catch a falling star because it is not possible do. Second task is also impossible to get a human-child from mandrake roots (A human-like shape tree).  Next task is of find the past moments of time that is also impossible. The poet continue such impossible task by adding that find the name of a person who cleft Devil’s feet. It is believed in Greek Mythology that someone cleaved the devil’s feet but no one knows who clove feet. The next task is of listening music of mermaid (mythical character: a woman with tail of a fish instead of legs that does not exists in reality). The last task is also impossible to remove envy from human nature.

Why Donne asks readers to do such impossible task. Because Donne believes that all above task may be possible but to find a beautiful and loyal woman in the world is not possible.

Second Stanza of the Song

Donne maintains the flow of poem and illustrates another task in second stanza.  He does not believe in existence of loyalty in beautiful women. Donne is talking about two traits in a woman at a same time: “true and faire”. One can find loyalty in a woman who is not beautiful but a beautiful woman cannot be loyal.

The poet tries to strengthen his point of view by saying that if a person has exceptional and heroic qualities. Who can see strange things and can travel thousand miles all over the world. His hairs will turns grey in searching a faithful woman but he will not be able to swear an oath that he ever found a beautiful and loyal woman.

It is interesting that how the speaker concluded his readers. Poet did not mention that why he do not believe in love at all. It may be something happened in his past where he failed to found a true love or betrayed by a woman that tuned his mind that all women are alike.

Third Stanza of the Song

In last stanza of the poem, the poet seems a bit convinced that it is possible to find a true and fair woman. However, he further says that she might be true and fair for that moment but not for a long time. Means, poet does not believe in consistency for love in women.

He promises that if someone become successful at finding a woman who is both fair and true, he himself would go on a pilgrimage to see her. Such a true and fair woman would be worthy of worship.

However, the poet rejects that journey in next line and says he will not go on that journey even if it be at the next door because that journey would be futile.  The speaker says that the woman might have been faithful at the time when you meet her, but she could not be faithful to you for long.

By the time, you write your letter to her, she would have been false to you because she might has already loved two or three men. Poet wants to say that she might be loyal at that time like first and second lover but what you will say when she will move to fourth man.

Critical Commentary of the Song; ‘Go and Catch a Falling Star’:

The Done states is his song that it is impossible to find a beautiful and faithful woman. We do not know about any background that why Donne is annoyed by the infidelity and inconsistency of the woman. The poet mentions two traits in women that cannot be found at a same time. First trait is ‘a beautiful woman’, but we do not know that what is beautiful according to the poet? What he likes that is beautiful: her physical posture and look or her attitude and inner character? Second trait is faithfulness; we can guess from last stanza that her faithfulness is her consistency in love.

In last stanza, post says that it might be possible to find a woman who is beautiful and faithful, but she is still not faithful because she has betrayed two or three lover by love letters.