What is Irony?
(Definition and Types of Irony)

Irony is a situation in which there is a contrast between expectation and reality. We use irony to create a contrast between appearances and underlying truths. For example, the difference between what something appears or someone says to mean very different from its literal meaning. Irony is associated with both humor and tragedy.

The term irony came into English language in the sixteenth century and came from the French word “ironie” and before that, from the Latin word “ironia” which means “feigned ignorance.” 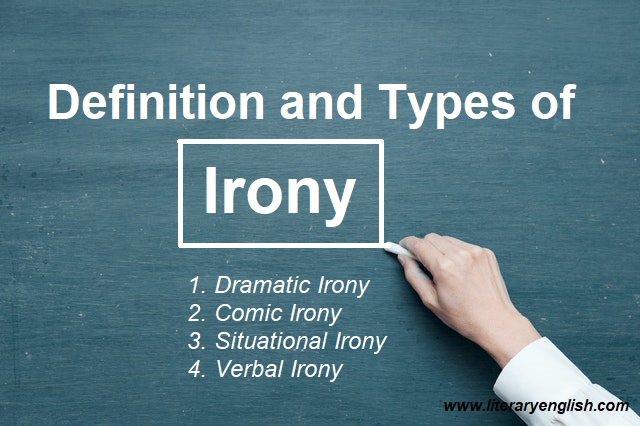 It is also known as tragic irony, this is when an author lets their reader know about something that a character does not. For example, a man is going to attend a wedding party and he is much hungry and thinking that he will enjoy a great meal there. He gets early, go to market, buy good shoes and clothes and prepare himself for the evening party, but readers know that the date for the party was 16th June and today is 17th June. He goes there and found no one is there, looks on watch and cries. Here readers were aware about the future happening of the man. Similarly, in Shakespeare’s Othello, Othello trusts Iago—but the audience knows better. Learn more about dramatic irony in complete guide here.

The stages of dramatic irony

There are three stages of dramatic irony: Installation, Exploitation, and Resolution.

Installation: In this stage, the information is presented to the audience or readers, but withheld from the characters.

Exploitation: In this stage, the author uses this imbalance to heighten curiosity and tension.

Resolution: In this final stage, the characters find out the truth.

Example of Dramatic Irony from Othello

Othello, written by Shakespeare, is one of the most pitiful tragedies because of the use of dramatic irony. We see how Iago is spoiling the life of Othello but he himself calls Iago best friend. We know how Iago manipulate every situation to get his own ends. Iago framed Desdemona, and we know she was innocent, but we are powerless to stop Othello; he has resolved to murder his wife. Othello considers him a friend and he has been plotting Othello’s demise during the whole play.

Othello was not aware that Iago is the one who is pulling his strings, but we know very well. We also know that he is the man who convinces Roderigo to kill Cassio, even as we witness him pretend to help Cassio after Roderigo wounds him. Only we see Iago kill Roderigo before revealing the truth. During the whole play, we know about Iago’s plotting but Othello was entrapped into his web calling him a best friend, and we witnessed a dramatic irony in this way.

Comic irony is used to create humorous effect—such as in satire. It is also a type of irony and comes in many forms, and can derive from ironic statements by characters or narrators in a work of fiction. It can also arise from the situation presented in the work. Irony, which creates comic effects, is known as comic irony.  Writers divide irony into many types. Any of these types can play the role of comic irony. A verbal irony or situational irony can create humorous effects.

A classic example of verbal irony used by Jane Austen, in her novel Pride and Prejudice, to create comic effects that occurs in the opening lines. The novel starts with the remark that “it is a truth universally acknowledged that a single man in possession of a good fortune, must be in want of a wife.” However, this statement is intended ironically: the female characters are chiefly concerned to marry a single man of good fortune.

This situation happens in a play when an expected result is subverted. For example, a man gets early to catch a bus, reaches at stop before time and feels happy that today his boss will appreciate him. When he listen the horn of bus, he feels much happy, gets into bus and comes to know that he forget his purse at home, he goes back to home and gets late again for the duty.

Situational irony in The Gift of the Magi

In short story, The Gift of the Magi, by O. Henry, we come across a situational irony when a wife sells her hair to buy a chain for her husband’s watch, and on the other hand her husband sells his watch to buy a combs for her hairs. Both of them have made sacrifices in order to buy gifts for one another, but in the end, the gifts are of no use. The real gift (winning others heart) show how much they are ready to give up their best belongings to win their love for one another.

This is a verbal statement where a speaker means something very different from what he or she is saying. When a person want to say something in a bad response and he says thank you very much, It is verbal Irony. Some of the Examples of verbal irony are written below.

Here are some phrases you might hear in everyday conversation that are the pure examples of verbal irony. These short phrase or sentences are always spoken in a context of a conversation.

If a boss orders his driver to clean the side mirror of his car and after cleaning driver says sir I have cleaned all the mirrors. Boss looks into mirrors and says, “These are clear as mud”: mean driver have not cleaned them properly.

Some more examples are below

“Friendly as a rattlesnake”

“About as much fun as a root canal”

“Thank you so much” (in response of something bad)

1 thought on “Definition and Types of Irony”