Literary term is a technique or a device used by a writer to tactfully emphasize, embellish, or strengthen their compositions. We can define Literary term in many ways. It is a tool to coin new thought and meaning into a word or an action. Literary terms also include name of different structures and formats in a given text like plot or diction of a literary piece. Writers utilize utmost meaning of a word by their different techniques, and they make their writing more appealing and interesting with full of figurative language and imagery. 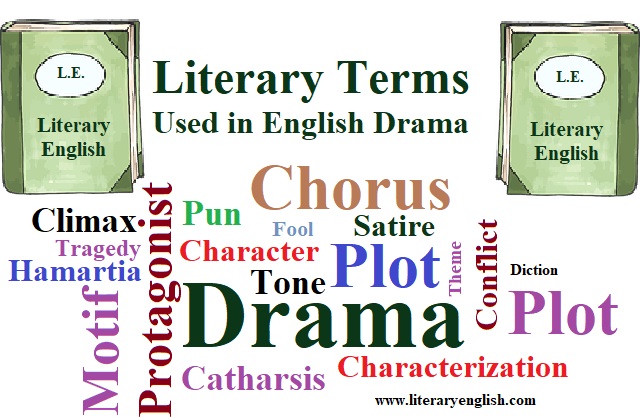 Some of the important literary terms are explained below.

Drama is any literary work that tells a story that usually involves actors on stage in front of a live audience. It is possible to read and comprehend works of drama; however, the full expression of drama is in the context of its performance on the stage.

The plot of a drama is a sequence of events that occur during the course of that drama and the way in which they are presented on the stage. According to Aristotle, plots must be in three parts: beginning, middle, and end; each event in the plot causes the next event to happen.

Theme is the central idea revealed in a literary text. Usually main theme of a literary work can be expressed in one word, such as love, war, heroism, hypocrisy, society, revenge, hate, wealth, etc. A literary work may have more than one theme in a single text. Usually, theme is not stated plainly in the text, but it is expressed through the characters’ actions, words, and thoughts.

Character is a person or anything that has an active role on stage of a drama. Sometime it may be an animal, an object, a tree or an illusionary character.

Catastrophe is dramatic action that is done after tragedy or tragic event. It is a momentous tragic event ranging from bad luck to extreme misfortune or ruin of tragic hero. It may be due to fate, intrigue of a villain, or due to hamartia of the hero.

Aristotle linked the term catharsis to dramatic tragedy. It is release of the emotions such as sadness, fear, and, pity through viewing a tragedy and it involves the change of extreme emotion to lead to internal restoration and renewal. In this way spectators learned to display emotions at a proper amount and minimize extreme outbursts of emotion in their routine life.

This term is used for a group of singers and dancers who perform on stage and their performance or song predicts future happening in the drama and connects part of drama. In Elizabethan drama chorus spoke the prologue of the drama.  It was most common part of drama in Greek tragedies.

The climax of a literary work is the very peak of tension nearly after the mid of the drama from which the conclusion comes down. In a tragedy, the climax reveals the protagonist’s greatest weaknesses or change in his mind, and this situation create curiosity among viewers and they expect something unusual.

In literary works, tone is the attitude or approach that the author takes toward the main theme of drama or any other literary piece. The tone of literary work may be humorous, distant, intimate, solemn, ironic, condescending, sentimental, arrogant, etc.

Satire is a genre of literature that is used to ridicules problems in society, businesses community, government, and individuals in order to highlight attention to certain vices, abuses, and follies, for the sake of improvements. Sarcasm and irony are usually key tools of satire. Satirists also use analogy, parody, and juxtaposition to highlight their points.

Exposition is the beginning of a drama in which characters are introduced through a prologue, a chorus song or through dialogue depending on the plot of the drama.

Conflict is a state of clash between the ideas and choice in minds of the characters. They cannot choose the right way and get stuck between true and fake.

The denouement is a final part of the drama just after the climax in which there is resolution for any conflicts left in the plot. All the loose threads of the plot are tied up and secrets are revealed in this last part.

Tragic comedy is a form of drama in which there is a mixture of comedy in a tragedy. In a tragedy, comedy is used to release the catharsis of the audience. Comedy is used in tragedy where audience are not able to see a tragic scene for a long time.

A fool is a character in a drama who acts as a joker in the drama. In tragedies, fools are created to neutralize the emotions of the audience or readers.

Thought mean what a character thinks or feels during the play. It may be an individual thought or it may be of multiple characters. Sometime, a character depicts the whole society that means he is reflecting thought of that society.

Diction is a choice of words and a language medium by which characters reveal thoughts and feelings.

“It is an imitation of an action that is serious, complete in itself and have a certain magnitude arousing the emotions of pity and fear resulting in catharsis”

Hamartia is a special term first used by Shakespeare for the downfall of protagonist due to his error of judgment. It may be due to his wrong decision unconsciously or he fails to judge what is right or what is wrong.

It is the turning point of the play where audience observes unpredictable change in the play.

Comedy of manner is the form of comedy on the life style and pursuits of elite class.

Domestic comedy is the comedy of common people depicting their pursuits and general routine life in their domestic domain.

A soliloquy is a monologue in which a character speaks out in a loud voice when he is alone. In this way audience can know what is happening next in the play.

The term stereotype is used for conservative ideas in a play about a character, setting or plot.

A motif is a repeating theme in the play. Some play or stories have more than one theme. The theme that is repeating in many section of the play is called motif.