Difference Between Speak and Talk & Say and Tell 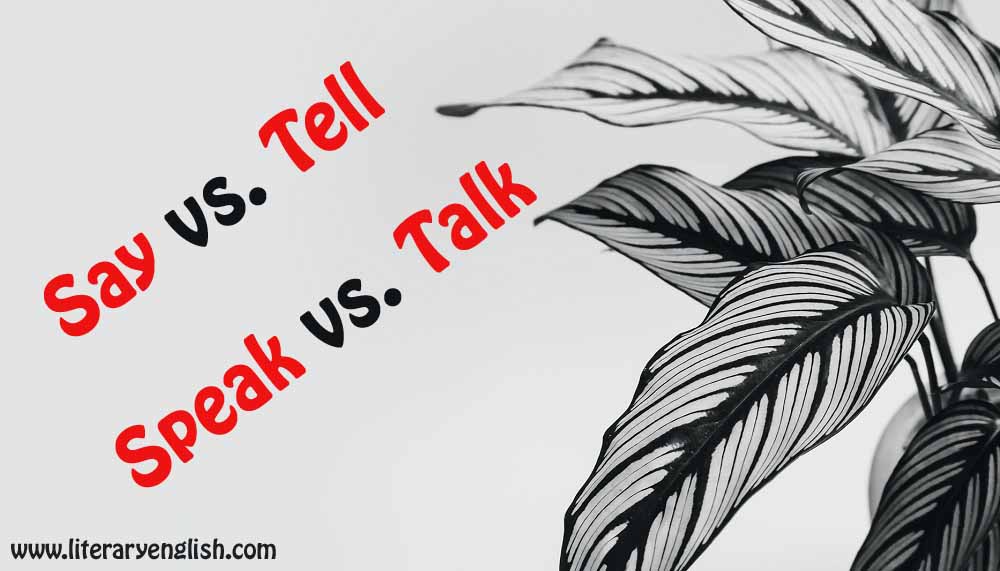 Difference Between Speak and Talk & Say and Tell

English language is very simple, but sometime it looks confusing for non-natives speakers and ESL students. Every language has a stock of similar words and native users of that language know very well about correct use of each word. Similar is the case with English language, some similar words in English language confuse us because of their similarity. They are so similar that it is difficult to know which one is the right one to use. Today we will discuss two pair of similar words that are very common in day life conversation. We will discuss the difference between speak and talk. Moreover, we will also differentiate say and tell.

Difference between Speak and Talk:

We use the word speak in more formal, important, and authoritative situations. However, we use talk in an informal situation and in generic terms. Both words are interchangeable depending on the situation. When we use verb talk to refer to a specific context, we add it with the proposition ‘about’.

We use ‘speak’ quite generally, for example:

Now this is quite general. We are not being specific about what we want to speak about. Moreover, it also sounds a bit more formal and important.

When we use verb talk, it looks more casual and informal, it does not sound as important as the word speak. Moreover, if we add ‘about’ we can add some more detail.

Most importantly, you can only use “speak” when you are talking about languages or referring to giving a speech to a gathering:

§  David will speak at the seminar tonight. (correct)

§  David will talk at the seminar tonight. (Wrong)

Difference between Say and Tell:

When you use the word ‘tell’, you must have a person/pronoun following the verb. Tell is used in indirect speech (also known as reported speech) and frequently focuses on specific information about something. This means that it is not used when quoting someone else’s speech, just when paraphrasing what someone said.

Below you can find examples of the say and tell in sentence.