Summary and Analysis of The Chimney Sweeper by William Blake 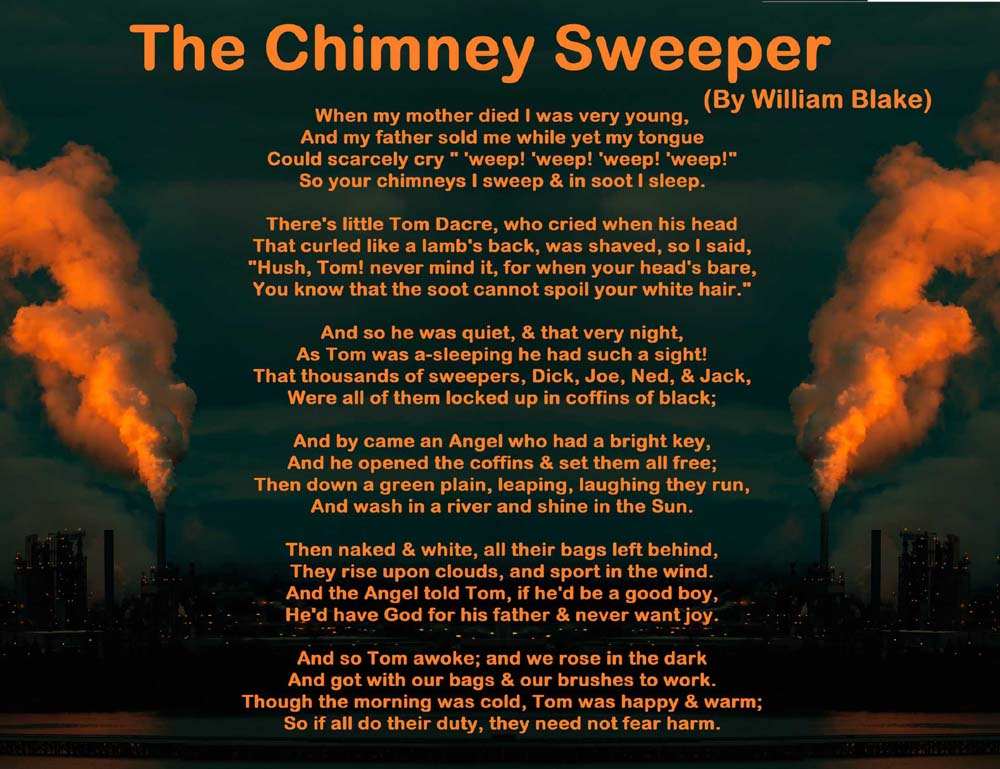 Introduction of the Poem:

The Chimney Sweeper is one of the most popular poems of William Blake about poverty and child labor. It first appeared in 1789. The poem comprises the agony of children, forced to live a miserable life. The children had to earn money through working as chimneysweepers at such a young age in the era of William Blake. The poem is so popular because it portrays the innocent children so realistically.

“The Chimney Sweeper” is a representative of sorrow. As this poem is about the young chimney sweepers, the speaker details about how he gets involved in sweeping chimney business. He says that his father had put him into the work as a chimney sweeper after the death of his mother. The speaker also recounts the story of his fellow chimney sweeper, Tom, who was hurt when his head was shaved. The narrator consoles him, and he goes to sleep. Tom had a dream in which he saw that all sweepers are in coffins. An angel comes and sets the children free. Then they play happily in the sun, and the angel tells Tom that he will have a heaven of his own. Next morning when he wakes up, he decides to work hard because he believes that if he works hard, he will get a reward.

Structure of the Poem:

Summary of  The Chimney Sweeper:

The poem “the Chimney Sweeper” starts by a chimney sweeper himself, who is telling about his work. Afterwards, he dwells in the story of his fellow Tom Darcre, how he saw a strange dream.

The speaker starts telling us in the start of the poem that his mother died when he was a small boy. He also confesses how his father sold him when he did not even know how to speak, indicating that he was probably a toddler at that time. In the eighteenth and nineteenth century, people used to put little boys to cleaning chimneys because they could ideally fit in there. The boy then tells us how he is used to sleep in soot every night, caught from cleaning all day.

Now, the chimney sweeper introduces us to his friend Tom. Starting with how his hairs that got shaved because he had white and curly hairs, getting dirty often. When his head gets shaved the small boy Tom cries helplessly. The speaker then tells us that he consoled Tom and told him to stop crying and worrying about his hair because it is a good thing. He will no longer have to worry about all that nasty soot getting into his hair.

Here the speaker further explains that on the same night his friend Tom saw a strange dream. He saw a lot of sweepers probably thousands of them locked up in some black coffins and the names were written on the few of them such as Dick, Joe and Nick.

In this stanza, Tom stops seeing the dreading black coffins. Instead, there comes an angle with a bright key and sets all the sweepers free.

It can be related to how the only escape from this job for chimney sweepers is death. They can only be free when they die and then they will be shinning like the bright sun.

Now, Tom’s dream gets weirder as we come to know that all the sweepers are clean, naked and flying on the clouds. They are playing in the wind as if they are finally free of all that burden of working. An angel comes to Tom and tells him that if he remains good then the God will become his permanent father. It sounds strange but it is a metaphor of desire. If you do good, God will give you all you desire for.

Finally, the dream ends. Tom and his sweeper friend wake up early morning, going straight to work. It is too early and cold to work but they are working hard. Tom is shown happy with his work after his dream last night, why?

Tom thinks that if will work hard everything will be good and he will get all his desires.

Here Blake is telling us that these children suffer mentally as well thinking that they have to work no matter what.

Major Themes in The Chimney Sweeper:

Misery, death, and hope are the major themes of “the Chimney Sweeper”. The poem presents the miseries of children as chimney sweepers and their contentment in life. It is through the mouth of two young speakers the poet conveys his idea that one should not lose hope. First, they are seen unhappy with their job, but later they accept their fate after having that vision and, somehow their lives become easy for them. They believe that their hard work would surely pay them in the long run.

Analysis of the Poem:

The first stanza introduces the speaker, a young boy who his circumstances force into the hazardous occupation of a chimney sweeper. The second stanza introduces Tom Dacre, a fellow chimney sweep who acts as a foil to the speaker. Tom is upset about his lot in life, so the speaker comforts him until he falls asleep. The next three stanzas recount Tom Dacre’s somewhat apocalyptic dream of the chimney sweepers’ “heaven.” However, the final stanza finds Tom waking up the following morning, with him and the speaker still trapped in their dangerous line of work.

There is a hint of criticism here in Tom Dacre’s dream and in the boys’ subsequent actions, however. Blake decries the use of promised future happiness as a way of subduing the oppressed. The boys carry on with their terrible, probably fatal work because of their hope in a future where their circumstances will be set right. This same promise was often used by those in power to maintain the status quo so that workers and the weak would not unite to stand against the inhuman conditions forced upon them. As becomes clearer in Blake’s Songs of Experience, the poet had little patience with palliative measures that did nothing to alter the present suffering of impoverished families.

What on the surface appears to be a condescending moral to lazy boys is in fact a sharp criticism of a culture that would perpetuate the inhuman conditions of chimney sweeping on children. Tom Dacre (whose name may derive from “Tom Dark,” reflecting the sooty countenance of most chimney sweeps) is comforted by the promise of a future outside the “coffin” that is his life’s lot. Clearly, his present state is terrible and only made bearable by the two-edged hope of a happy afterlife following a quick death.

Blake here comments on not just the deplorable conditions of the children sold into chimney sweeping, but also the society, and particularly its religious aspect that would offer these children palliatives rather than aid. That the speaker and Tom Dacre get up from the vision to head back into their dangerous drudgery suggests that these children cannot help themselves, so it is left to responsible, sensitive adults to do something for them.

Symbolism in the Poem The Chimney Sweeper:

Lamb: Poet compares child’s hair with hair on back of the lamb. Lamb here symbolizes innocence, meekness and naivety.

Soot: As soot gets in the children’s hair and makes it dirty, soot in this poem symbolizes sins, which corrupt life and make it polluted.

White Hair: The color white stands for purity, innocence and cleanliness. White hair in this poem expresses purity and innocence of children.

Black Coffins: Black is the color associated with gloomy, dark and bad stuff. So black coffins in the poem symbolize a place where people are stuck due to their sins.

Bright Key: Bright is the word that carries hope. Key contains message of freedom. Therefore, the bright key is a symbol of the mercy of God, which frees the foul souls from their darkness and brings them light and freedom.

About Authoress: The article “Summary and Analysis of The Chimney Sweeper” was written by Sayeda Javaria. You can reach her at javaria.hanan@gmail.com or view her profile at Sayeda Javaria Hanan .

The Rape of the Lock