Summary and Analysis of The Tiger (The Tyger) by William Blake

In this article, you will read about introduction to the poet and poem, summary of The Tiger,  major themes in The Tiger, and Symbolism used by William Blake in the poem, The Tiger. 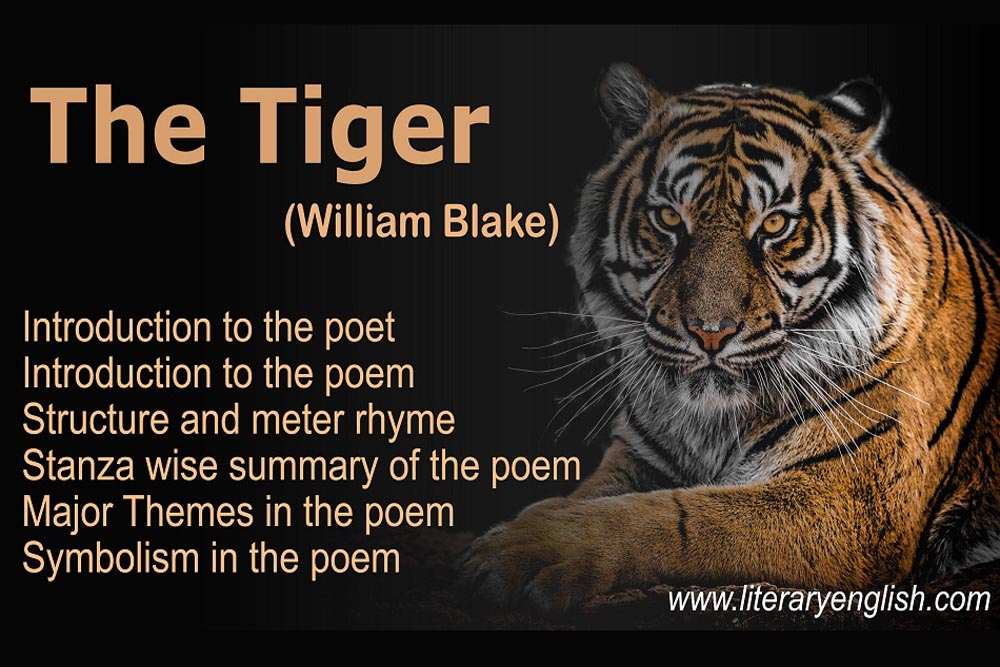 Introduction to the Poet William Blake

William Blake was an English poet, printmaker, and painter. He was born in London, England, on 28th November 1757.  His work remained unrecognized during his age but later on he emerged as a seminal figure in the history of the English poetry and visual arts of the Romantic Age. He was a great visionary poet of his time. Blake was not only an English poet, but a visionary poet of all ages. He lived during Romantic age and his works depict the age of that time

He was against race discrimination and raised his voice for equal rights in his poetry. He also raised child labor issues in his poetry and other many major issues including fake depiction of Christianity. His Works are divided in to main collections: Songs of Innocence an Songs of Experience.

Introduction to the Poem The Tiger (The Tyger)

TheTiger poem was originally spell  “The Tyger” by William Blake. The poem was published in Blake’s collection “Songs of Experience” in 1794. This poem is a lyric poem that focuses on the nature of God and his creations. The Tiger is one of the famous poems by William Blake.

“The Tiger” poem is the sister poem to “The Lamb” and it is deeply linked with “The Lamb” that was published in 1789 in a collection entitled “Songs of Innocence” by William Blake. The Poem “The Tiger” presents a duality between aesthetic beauty and primal ferocity, on the other hand “The Lamb” brings attention to innocence. Blake highlights the contrary aspects of life by comparing these two poems and believes that the hand that created “The Lamb”, also created “The Tiger”.

Structure and Rhyme Scheme The Tiger

William Blake’s poem, The Tiger, has six quatrains each having to couplet. The stanza repeats as the first stanza only with one word change. Thus the poem has twelve coulpets of 24 lines. Blake also makes use of end-rhyme to make is full of artistic style.  Each stanza is based on two end-rhymed couplets. As in the first stanza, first and second line end with rhyming words ‘bright and ‘night (AA). In the same way third and fourth are also end rhymed (BB) that make perfect rhyming (AABB).

The poem is written in trochaic tetrameter catalectic which means the meter used in poem is the trochee: a stressed/accented syllable followed by an unstressed/unaccented syllable, e.g. in the line ‘Tyger Tyger, burning bright’ the stresses are as follows:

There are four feet in each line, hence tetrameter. But in trochaic tetrameter catalectic, the fourth feet of each line contains one syllable and unstressed syllable is missing deliberately as in above example.

Summary of the Poem The Tiger (The Tyger)

1st Stanza of the Poem The Tiger:

In the first stanza, the poet says that the tiger is in the deep forest and burning (glowing) like (yellow) fire where it is roaming in the night time. The words “burning bright” reflect the tiger’s bright yellow colour that makes it look fierce.

In second couplet of first stanza, the poet makes a rhetorical question, which is the immortal hand or eye which is capable of creating or building its fearful symmetry. William Blake appreciates the power of God who can create such a fearful structure and bear its appearance. The man can neither create such fearful symmetry nor can bear it because of fearful appearance.

2nd Stanza of the Poem The Tiger:

In first couplet of second stanza, Blake continues talking about eyes of the tiger. He says that when the tiger’s eyes spark, they appear to have a fire raging within them. He wonders from which distant the fire has been brought for the eyes of the tiger. The fire has been brought either from skies or from deep oceans that means either from sun/heaven or core of the earth/hell) because it is not an ordinary fire of this world but divine one which makes the eyes of the tiger so fierce. In the second couplet, the poet wonders which were those wings that took Him to those distant areas. He also questions how strong the hands of the tiger’s Maker had to be that He brought such divine fire under his control. So, in the first couplet, Blake appreciates the divine fire and in the second couplet, he appreciates the Wings and Hands of the Creator Who has control over fire.

3rd Stanza of the Poem The Tiger:

In third stanza of the poem, the poet thinks about the tiger’s Maker manipulating the ligaments of the tiger’s huge body with his own hands. The poet also talks about the tiger’s heart. He wonders what kind of shoulders and the art the Creator would have which shape the muscles or ligaments of tiger’s heart. He then questins that how much force his shoulders would have to hold to be able to do that. He also wonders for the skillful technique would have to be adopted to achieve this mighty task. The poet also wonders the moment when the tiger came alive with its beating heart, and wonders how powerful the maker’s hands and feet would have to be in order to not be intimidated by the beast.

4th Stanza of the Poem The Tiger:

In 4th stanza, the poet compares the creator of the tiger with blacksmith in his imiginition. He wonders for the divine tools like hammer, chain, anvil and furnace the Creator would have used for creating the tiger’s brain and his solid and heavy body. He also thinks that the tiger’s brain must have been made in a furnace with high temperatures. It must have been terrible moment when the tiger was created, and also imagines how powerful is fist that could grab the tiger in its grasp.

5th Stanza of the Poem The Tiger:

In 5th stanza, the poet tends to compare this deadly animal (tiger) to the innocent and meek lamb which is quite contrary to the nature of a tiger. Moreover, there is also a clue to the Biblical reference as mentioned in Paradise Lost by John Milton.

The poet says that when the tiger was created by God, the stars (Satan and his followers) which were in war with Him were so frightened by its sight that they accepted their defeat by throwing down their weapons and sky became wet with their tears.

In the second couplet of fifth stanza, the poet wonders would God have smiled after creating this deadly animal (tiger) as it was beyond words for Satanic forces. He again imagines is He the same who created an  innocent and meek lamb contrary to the the former ( frightening tiger) that is deadly enough to frighten Satan and his followers.

6th Stanza of the Poem The Tiger:

The last stanza is composed of almost the same as the first stanza but only ith a slight change in the last line. The only word that is changed is ‘dare’ instead of ‘could’. In the opening stanza of the poem, the poet seems to be less amazed by the powers of tiger and God but after going through all the frightening and powerful features of the tiger; he is amazed that it is only God who can dare to create such an animal.

Symbolism in the Poem The Tiger

The Poem The Tyger is full of Symbolism. Symbolism is a figurative device where something is used to imply ideas and qualities, giving them figurative meanings different from literal meaning.

Major Themes in The Tiger | The Existence of Evil

William Blake’s poem “The Tiger” revolves around a question that embodies its main theme: Who created the tiger? Was it the God who created an innocent and meek lamb? Or was it Satan?  Blake puts his question in secound couplet of first stanza:

What immortal hand or eye  Could frame thy fearful symmetry?

Blake comes to know that there is only God Who create all living and non living on the earth. Though, to express his bewilderment that the God who created the innocent and meek lamb also created the deadly animal tiger, he imagines that Satan may be a possible creator of such terrifying tiger. And if it was created by kind God, why did He choose to create such a fearsome tiger?  Blakes raises his rhetorical questions at opening of second stanza:

In what distant deeps or skies Burnt the fire of thy eyes?

The word ‘deeps’  refer to earth or hell and skies refers to heaven. In both case, poet refers to fire either the fire of hell or the fire of the stars.

No one can deny that the tiger symbolizes evil and that the lamb represents goodness or Christ. Blake put a question based on an old philosophical and theological question: Why does evil exist in a universe created and ruled by a kind God? Through the example of the fearful tiger, the poet wants to express his thoughts and examine the existence of evil in the world. The poet expresses his views in many ways: if God holds all powers and created everything (including goodness-expressed in The Lamb) of the world, why He created evil? Blake leaves it unanswered. He wants to show the canvas of reality in his poetry.

William Blake made very clear and stark questions.These questions are handed over to the reader to ponder on these hidden facts; the speaker is unaware and doesn’t know that why God has created evil and goodness in one world being contrary to each other. However, by comparing tiger’s fearsomeness to evil and the lamb to the innocense and gentleness. The poets also wants to express that perhaps both creatures are essential parts of God’s creation. That is, perhaps the majesty of God’s work requires such contrary forces. By the end, the speaker suggests that without fear and danger, there could be no love and joy, therefor both forces are part of life.

About Authoress: The article “Summary and Analysis of The Tiger” was written by Sayeda Javaria. You can reach her at javaria.hanan@gmail.com or view her profile at Sayeda Javaria Hanan .

The Rape of the Lock

2 thoughts on “Summary of The Tiger (Tyger) by William Blake”