Major Themes in The Rape of the Lock 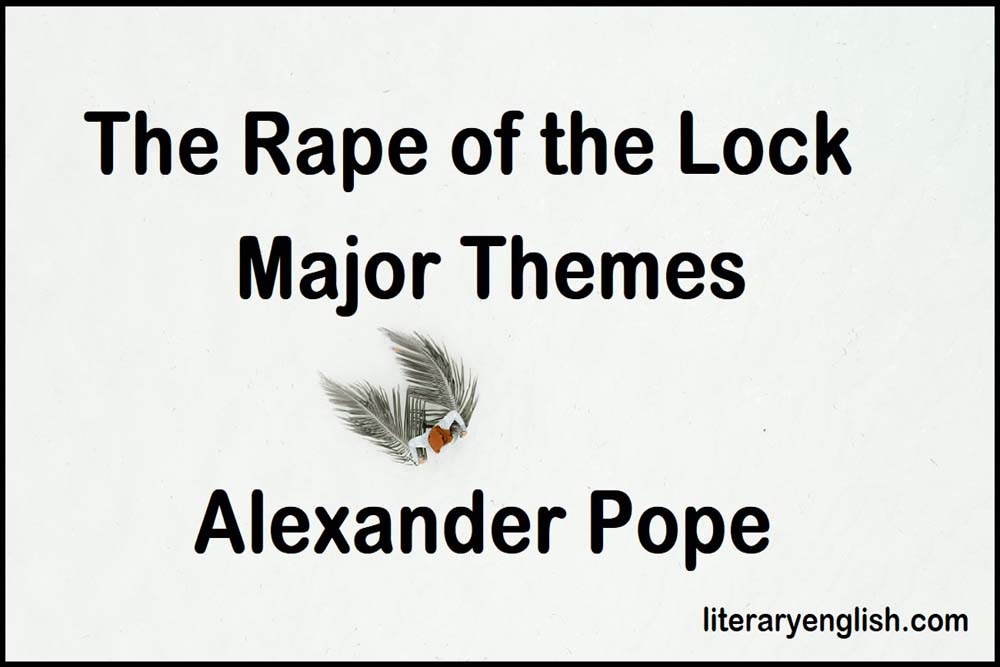 Some of the major themes in The Rape of the Lock are beauty, religion and morality, femininity, pride, love, pursuits, and morality of upper class.

Major Themes in Rape of the Lock:

Alexander Pope’s “The Rape of the Lock” offers an ironic glance of court life in the 18th-century, highlighting societies centralized on beauty and appearance. The poem’s center of focus is around the experience of a beautiful woman, Belinda, who lost her lock of remarkable hair to a nobleman known as the Baron. As the poem starts to go along, it steadily becomes sillier and sillier and the characters collapse into a battle over the lock. Pope’s added Clarissa’s speech into the poem, which argues that women spend much time on their looks rather than thinking to become a better person and serve society. The main thesis of Pope was that this kind of self-obsession is useless and radically nonsense. However, the poem’s conclusion seems to suggest that true beauty would be of some value, but if it becomes the subject of poetry, thus it achieves a kind of literary immortality.

Pope mocks Belinda’s obsession with her beauty by comparing it with a hero which is about to go into battle. She beautifies herself all day and appears at court as insignificant. When she lost the lock of her hair, her furious reaction allowed Pope to poke fun at her vanity.  Alexander Pope kept defending the intellectual and moral authority of his female characters through the wisdom of Clarissa’s speech, demonstrating female intellect and morality. He further questioned the wisdom of such a maternal system by outlining the Baron’s behavior as immoral. His fellow male courtiers are foolish. They allowed him to suggest that a maternal society is both unfair and unfounded.

It is important to note that the time Pope wrote the poem it was generally believed that women were both intellectual and moral inferiors of men. Pope seems to say that vanity itself is folly, but to appreciate great art, thus it can be said that one should be careful not to underestimate the role of beauty in inspiring great works like poetry. By using mock epic into the poem, he not only glam up the whole scenario by giving it huge fairy dust powder, but also entertains the question of responsibility in the poem.

Religion and morality is also also on of the major themes in Rape of the Lock. Pope’s poem is full of moral questions about religious culture and life in the 18th-century. The time when the poem was written, England’s last Catholic monarch had been deposed. England, once again, became a Protestant Nation. At that time, Protestant bitterly criticized Catholics, believing that Catholics had strayed from the worship of God.  Pope was from a Catholic family. Throughout the poem, it is possible to detect humorous evaluation of Protestantism. Protestants made life very difficult for Catholic families to own a land or live in London. Pope parodies the hypocritical religious rhetoric of that time and suggests that Christianity is not the best lens. It cannot be used to understand the mysteries of human behavior and self-obsession.

This has profound significance for Pope’s treatment of Christianity. At the heart of Christianity is that people are in control of their wills and actions, but God will judge people accordingly.

Pope shows his ideology that the whole Christian religion, Catholic or Protestant, follows human actions. These actions are mysterious and their motives are opaque. Because of this, it is absurd to believe that anyone could be straightforwardly judged.

3.    Theme of Immorality and Carefree Nature of Upper Class:

Pope has presented that in a matter of times the careless and casual response of high society is dangerous. He presented the society where the upper class is busy in pursuit of their own goals through trivial and vain. He portrayed that upper class people just think about themselves and obsessions. In this poem, the society displayed is one that fails to distinguish between things that matter and things that do not. What they care about is their personal life, luxuries, pomp, vanity. A life that is matchless to the ordinary and the common. He makes fun of their stupid deeds and self-obsessed attentions. He has disguised that this society just leads to immorality and distraction between humans. Alas, in the end, all upper-class people stay empty-handed.

It is serious that a woman’s hair is cut but she has rejected a lord and such crimes are frivolities and fun of life in ease of nobility.

Pope has made fun of women; they just think and are concerned about their beauty aids alone. He presents Belinda like an epic heroine. He symbolizes that this mock-heroic epic is Belinda’s maidenhood. Pope says that women do not have a fair chance because they are even more self-conscious and limited by society’s rules and regulations than men are. Clarissa’s speech is a fine example of this attitude and also deals with the situation ideally with a smile rather than do anything to change it. Women, in the poem, are illustrated as being more in control of society than men are.

It is obvious to us that if you put a bunch of attractive, well-off, and bored young men and women together. They will get attracted to one another, feel desire for one another, have dreams about one another; maybe they even fell in love. Pope depicts in The Rape of the Lock the trouble with the society is absolutely threatening and no way for anyone in it to safely express or act on his or her sexuality, desire, lust, life, feelings or love.

Pope thinks that love has no importance for the characters in this poem. For the Alexander Pope, the upper class believes only in victory and defeat. Love has no value in their unthinking minds. Belinda meets with a smile but yields and bow down to none. The poem has also symbolized Belinda’s character as a strong modern woman, who loves her beauty more than anything else. Baron loved to have an affair but without feelings and pure attention, it would be considered a victory. The society portrayed in The Rape of the Lock seems constructed to deny each other’s real feelings. For them, live-in relationships were common, but love in those relationships was counted as something odd.

Pride is also one of the major themes in the Rape of the Lock. We can say that the pride of a woman is natural to her, never sleeps, until modesty is gone. Beauty can be without pride and our dear Belinda handles it best of all. She takes care that no one would go without looking at her with a full glance. Baron decides to take revenge on Belinda by stripping her beloved lock of hair. Baron tried to get Belinda by force but not by marrying her, he tried to win over her but failed. As Belinda’s pride, self-respect and beauty were more important for her than anything else.

The Rape of the Lock, reveals that the central concerns of the poem is pride, at least for women like Belinda and other social ones found in that society. Pope wants us to recognize that if Belinda has shown all her typical female weakness, then that would be against her pride, partly it is because she has been educated and trained to act in this way. The society as a whole community is as much to blame as she is or the men free from this judgment.

About Authoress: The article “Major Themes in the Rape of the Lock” is written by Sayeda Javaria. (javaria.hanan@gmail.com).