Difference between Lane and Line

Lane vs. Line | Pair of Words 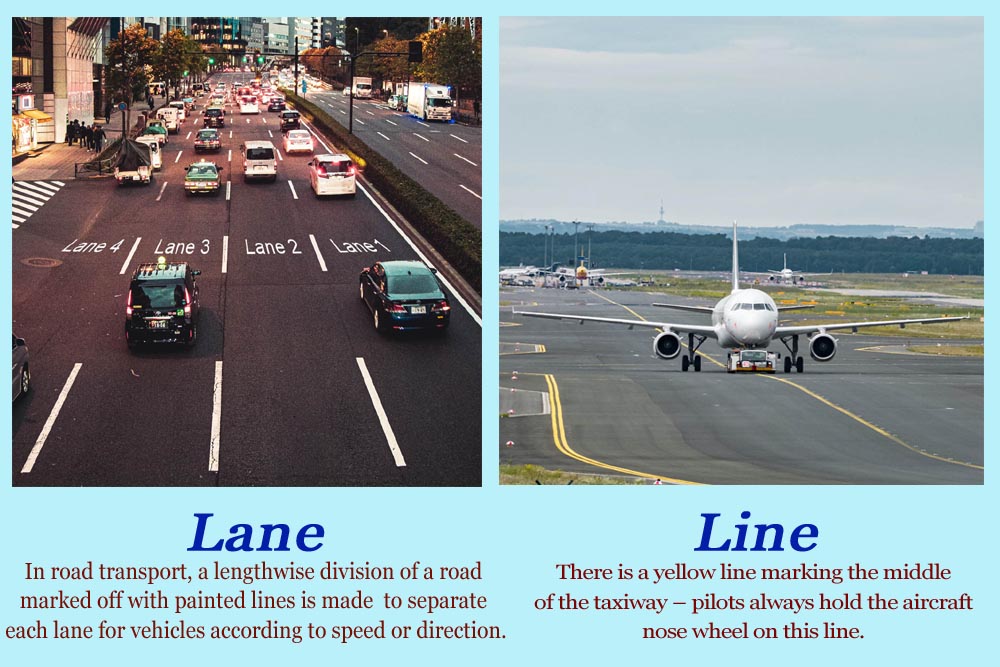 Lane and line, both words are noun and verb, and differ in their meaning. The word lane represents a narrow passage between two lines. These two lines may be two fences, two marked boundaries, two line of trees, or two walls.

While line is a continuous mark, including a single line made by a pencil; any path marked by dots stones, or a continuous single line. Line also means to place something into a line as students are asked to make a line during assembly.

Different Use of Lane in our Daily Life

·        Lane is a narrow passageway between fences, walls, hedges or trees

·        In road transport, a lengthwise division of a road marked off with painted lines or dots and intended to separate each lane for vehicles according to speed or direction e.g. cars in Lane 2 and buses in lane 4 and lane 1 and lane 3 are reserved for overtaking. .

·         When athletes participate in race, they also run in their own lane on racetrack.

·         Generally, a narrow road/street, as in the country, has two lanes for traffic in each direction.

Examples of Lane in sentences

·         The innermost lane on roads in normally reserved for overtaking.

·         Some roads have separate for emergency vehicles like ambulance or fire truck.

Definition and Use of Line

A continuous narrow line that separate two lanes or a marking line intending to show direction or turn as on runway for aircraft navigation is line. Line has broad concept and widely used term than lane and can be found it use in everywhere.

Examples of Line in sentences

·         The aircraft was moving ascending leaving a line of smoke behind.

·         The teacher made a line from center of whiteboard and divided it into two equal parts.

·         The graph paper has a pattern of vertical and horizontal lines that divides it into small boxes.