Difference between Affect and Effect

Affect vs. Effect | Pair of Words 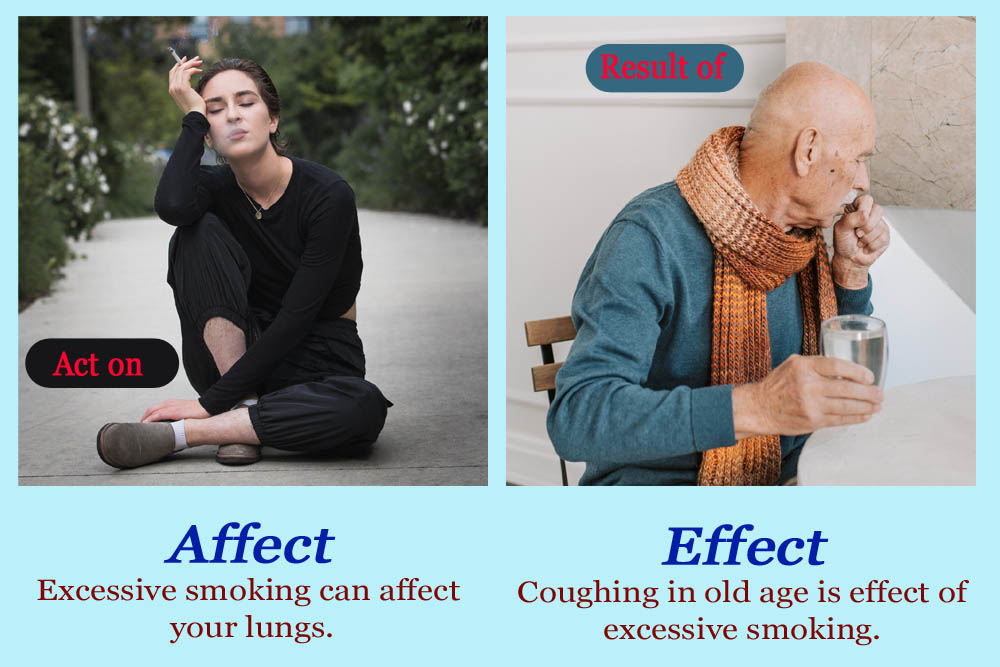 Difference between Affect and effect | Affect vs. Effect

The two words, affect and effect, are very confusing when it comes to use them in a sentence. Sometimes, even native users become confused when making a choice for a correct word. In this article, we will discuss about difference between affect and effect with their usage in multiple sentence so that you become familiar with both these confusing pair of words.

We will take start from the etymology of both words: affect and effect.

Affect came from the Latin word affectus that is past participle of afficere. Affectus means a state caused by any external factor. Afficere means to do something or act on. If we go back toward 14th century, it also has a link to German word Affekt.

Now, we will trace the origin of word effect. It also takes its origin from a Latin word effectus (past participle of efficere) which means a result, ending, or completion.

More recently, the word effect looks similar to many words in other languages e.g. efecto in Spanish,   effet in German, effect in French, and efeito in Portuguese.

Are affect and effect homophones?

Both words, affect and effect, have equal letters but initial letter is different of both words that makes a difference in their pronunciation. These words are not homophones but we call them near-homophones especially for non-natives.

Synonyms of affect: Influence, modify, sway, touch, alter, stir, have an effect on.

What does affect mean?

The word affect is mainly used as a verb in a sentence because it acts or performs on something, causes any change in a state, or influences something or someone. The verb ‘affect’ means, “to act on; to perform an action on something that ultimately creates an effect or change in that thing.

The hot sun performed an action on tree leaves and caused a change in tree leaves. The act of performance or the action that is taking place is affect.

It also can cause a change in a mind or can change feeling of a person with some action.

“The recitation of Holy Quran affected him and he converted to Islam.”

The recitation of Holy Quran changed the feelings or thoughts of a person and resultantly he converted to Islam.

Use of affect as a noun

We use the word affect as a noun when referring to a display of emotion or feelings. Look at the example given below.

In above example, the word affect is used as a noun because it is not an action.

Whenever you are talking about terms to express an action, you are certainly looking for the word affect.

How to know that you are using affect correctly?

What does effect mean?

The word effect, in above examples, is used as noun that means result.

How to know that you are using effect correctly?

If you are confused for choosing correct word, just substitute effect with another noun in the sentence, you will come to know that you are using the correct word. Look at the examples.

In above example, we changed effect with a noun and the sentence is still OK.

Here are some synonyms of affect: alter, change, influence, modify and impact (the verb version). That list should affect your understanding of the word. In this case, affect would mean “improve.”

The word affect (being a verb) has several form like; affects in present tense, affected in past tense, and affecting in present participle.

On the other hand, effect is a noun and only occurs in the plain form effect. A noun has plural form so the word effect can be used as a plural like; effects.

Affect and Effect in Sentences

Hope you have understand difference between affect and effect. Now we will practice these words in different sentences.

Use of affect in sentences

Use of effect in sentences

The word affective is derived from affect that means something that can produce affects. If a drawing book is famous for the students and contains good drawing skills, so we can say that the drawing book is an affective book.

Similarly, effective is taken from effect that means successful in bringing about a desired result. In example: “Dieting is a simple and effective way to lose weight.”