Imminent vs. Eminent | Pair of Words 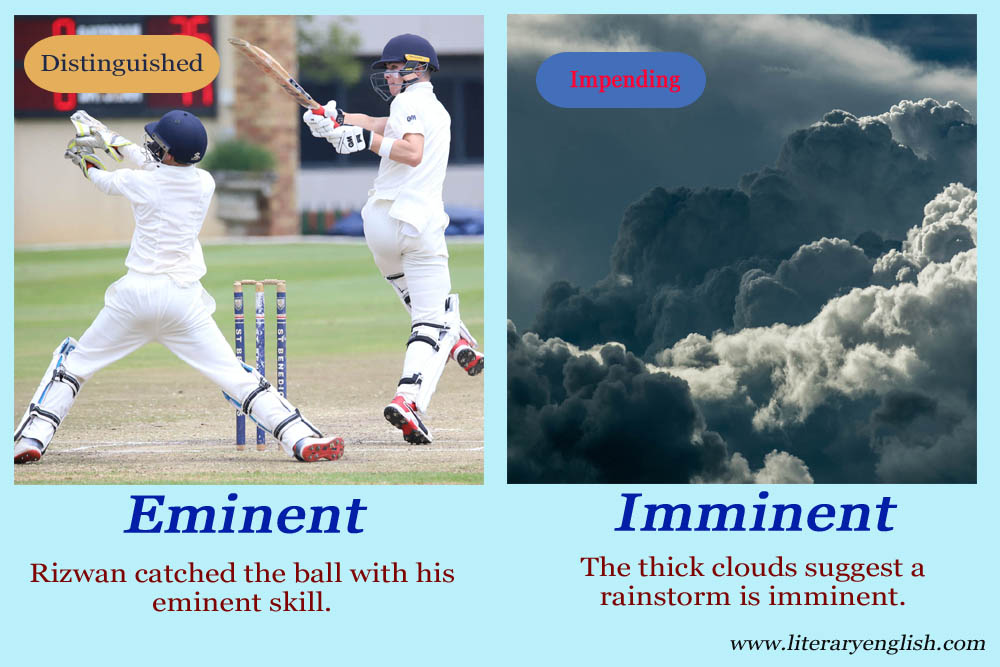 Difference between Eminent and Imminent | Eminent vs. Imminent

Meaning of Eminent and Imminent

Eminent: The word eminent refers to the something or a person distinguished/important/notable from others. The word Eminent is used for individuals

The word eminent is used as adjective to describe someone or something noticeable, of high rank, distinguished, respected or prominent. A renowned public leader, a respected intellectual, a trustworthy person, for instance, is eminent, as the book title “Eminent Victorian” by Lytton Strachey.

According to definition by Oxford Dictionary, “it refers to a famous and well respected person within a particular sphere.”

Examples of Eminent in Sentences

·         The honorable award was offered to eminent people who served the affected in flood and rain.

Imminent is an adjective that is used to describe something or a situation that is about to happen very soon. It specifically refers to something that is impending as frightening or dreadful. Something that is imminent means is very near or looming.

For example, when a newscaster forecasts for a 100% chance of rain, we might say that rain is imminent.

The synonyms of imminent are impending, looming, forthcoming, pending etc.

Examples of Imminent in Sentences

·         There is a real threat of imminent violence during public protest.

·         It does not make any sense to dive out with the imminent approach of a thunderstorm.