Difference between Accept and Except

Accept vs Except | Pair of Words 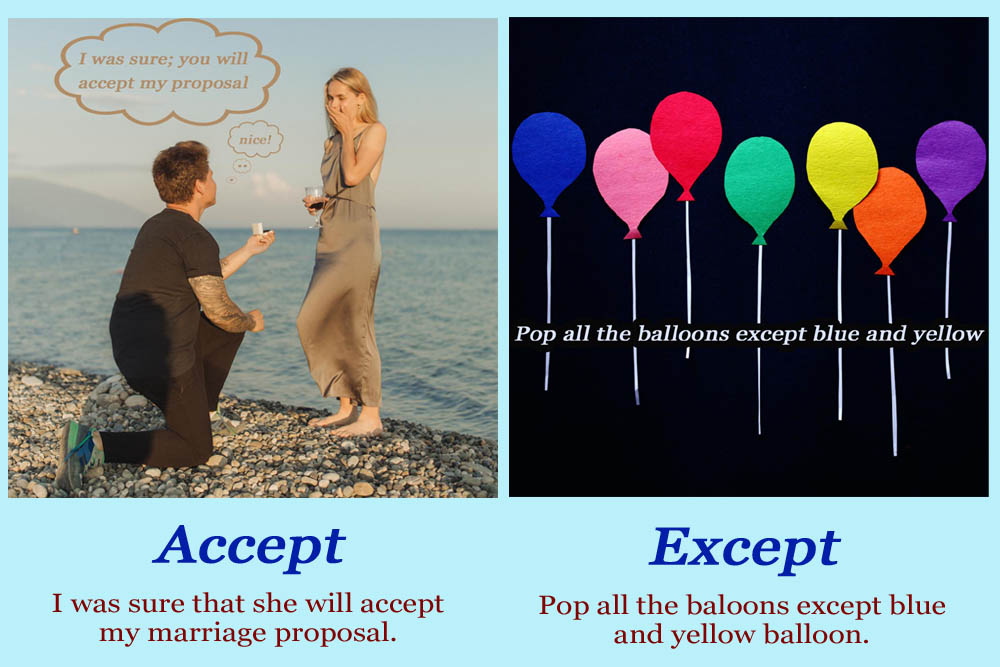 Difference between Accept and Except | Except vs. Accept

Accept and except are homophones and can confuse a reader because of sound similarity but both words are very different in their meanings.

Meanings of Accept and Except:

Synonyms of Accept and Except

Accept: approve, have, take, allow, get

Except: apart from, but, other than, outside, aside from

Pronunciation of Accept and Except

Explanation and Use of Word; Accept

The word accept is a verb and its core meaning is “to receive (or take) something intentionally and willingly”. A person may receive a practically thing like a gift, money, or he may receive a responsibility like duty, an obligation, a risk, or an opportunity of a job, or he may agree to the idea of another person like a decision, a theory, a suggestion or a proposal.

Look at the given examples to comprehend the meaning of accept.

·         Many economist have accepted that democracy is better than capitalism.

·         The traffic warden denied to accept bribe and fined the driver for wrong parking.

The word accept has a wide range of its meanings. If a person asks his fiend to join him on a long drive. His friend has two options: accept or deny, and most possibly, he will accept his proposal.

Explanation and Use of Word; Except

We use it also as a conjunction in a sentence. Look at the example below:

In a nutshell, the word accept and except are different in their meanings. The word accept is widely used in daily conversations but the use of word except is rare.

1 thought on “Difference between Accept and Except | Pair of Words”