Difference between Isle and Aisle

Aisle vs Isle | Pair of Words 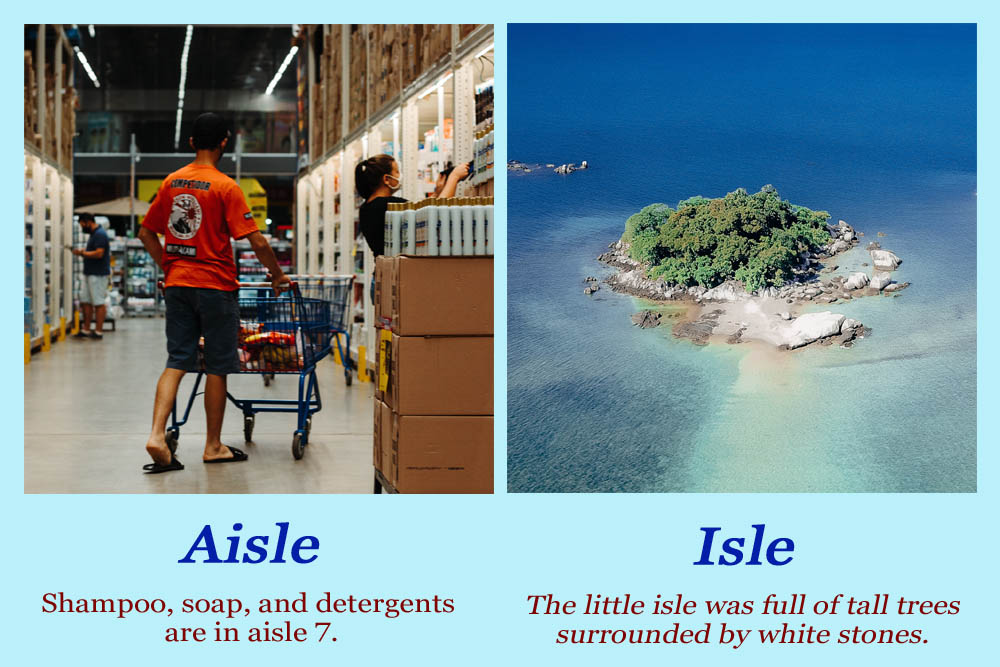 Different between Isle and Aisle | Pair of words

Meanings of Isle and Aisle

Aisle: a passage or walkway separating sections of seats or two parties in a legislature

Etymology of Isle and Aisle

Pronunciation of Isle and Aisle

Both words homophones and pronounced in a same way. The letter s is silent in both words and sound of letter ‘i’ and ‘l’ is audible. The word Aisle has an additional letter ‘a’ at the start of word but only ‘i’ and ‘l’ are pronounced. The phonetic transcription of both words is /ˈī(-ə)l/.

Aisle is used as a noun in English language where it denotes a passage or lane between rows of seats in a building such as a church or theatre, an aircraft, or train or a lane between two parallel shelves. We can see an aisle everywhere around us like in a supermarket, parliaments, library, churches, factory, courtrooms, warehouse, etc.

In factories and warehouses, an aisle could have storage pallets to place equipment to its right and left. In offices, aisles could be separating work areas or two line of desk/chairs placed separated by a lane in a waiting area.

Difference between a Passageway and an Aisle

We should keep In mind that the word aisle is not a passageway. Because, an aisle is not the narrow passage between two rows of seats in a movie theatre, stadium, or auditorium if it has a cover on it like a tunnel, a tube, or cave. A passageway has two sides like aisle but it has an enclosed roof or top like a tunnel, a tube or cave.  On the other hand, an aisle misses out a roof or top.

A hallway, tunnel, tube, and cave are the examples of passageways. Although both have similarities. An aisle also has roof but the roof or top is common roof like in church where all lines of chairs or desks and aisle have same roof or similarly in a bus or airplane.

Example of Aisle in Sentences

·         Jack wandered round the aisles and found a beautiful clock.

·         Rose spend many hours at supermarkets, wandering through the aisles.

·         A bottle of wine fell off the lower shelves and rolled into the aisle of the store.

·         Due to summer holidays, the aisle in the bus was crowded with tourists.

An isle is an alternate naming word for “island”. “Isle” and “island” are noun that represent same thing and can be used interchangeably. However there is little difference between use of these two words but some time we can use them interchangeably.

Difference between Isle and Island

Generally, it is believed that an isle is used for small island. Isle is also used for a remote piece of land inside the sea. The small island like Ireland, the Hebrides, and the Isle of Man are known as isle. On the other hand, large islands such as Sri Lanka, Japan, Indonesia, Maldives, and Seychelles are called “islands” and not “isles”.  In a nutshell, “isle” and “island” are synonymous and can be used interchangeable.

Name of Some Common Isles

Name of Some Common Islands

Example of Word Isle in Sentences

·         British Isles were looking very small from the window of airplane.

·         Our government decided to make an airport on remote isle.

I hope that now it will be clear to you that what the difference between aisle and isle is. Aisle and isle, both are homophones, which they are pronounced the same but use of both word is different. An aisle is a walkway between two rows of seats, shelves or pallets. An isle is a small island.