Difference between Advice and advise

Advice vs. Advise | Pair of Words 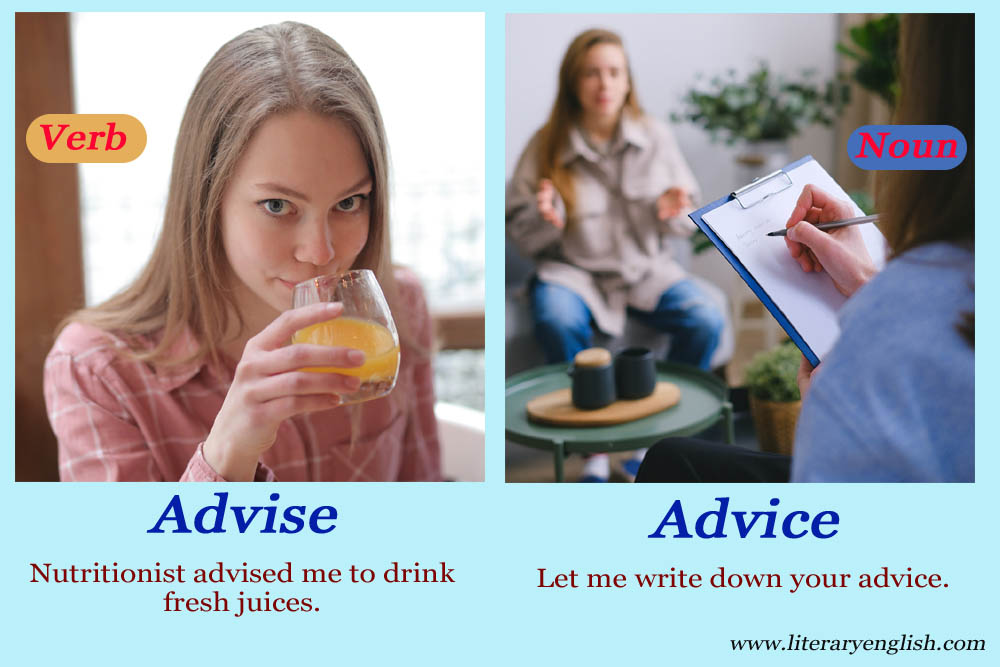 Difference between Advice and Advise | Advice vs. Advise

The advice and advise are very confusing words because they sound alike and spelled similarly except one letter. Writers become confuse when they have to use either one of the words in a sentence. Some people think that they are identical and interchangeable but these are not interchangeable.  Both words are quite different in their meanings, spelling and pronunciation. Both words have two syllable. First syllable is similar in both words but second syllable has different ending sound because of change of one letter.

Both words are not interchangeable because they have quit different meaning and also belong to parts of speech.

What does advice mean?

Advice is a noun, which means: an opinion, a suggestion, or a recommendation.

We use it as a noun in a sentence. It is an opinion or suggestion that someone offers you about what you should do in a particular situation. Either we give advice to someone or we receive from another person; it remains a noun.

Explanation with an example

In above sentence, we are talking about an opinion of john. It is an idea of john to live a happy life by keeping a smile. An idea is a noun, thus advice is also a noun.

What does advise mean?

Advice is a verb. It is an opinion, a suggestion, or a recommendation offered as a guide to act upon. The advise is an act of giving someone advice.

We use it as a verb in a sentence. It is an opinion offered by someone to act upon or perform an action accordingly.

Explanation with an example

In above sentence, John advised him – means he performed an action. John asked him to act upon his advice of quitting smoking. Performing any action is quality of a verb, thus advise is also a verb.

How to know that you are using advice and advise correctly?

Substitute of advice to check correct use of advice:

Substitute of advise to check correct use of advise:

Are advice and advise homophones?

Both words, advice and advise, have equal letters but one letter is different in both words that makes a difference in their pronunciation. These words are not homophones but we call them near-homophones especially for non-natives.

Advice ends with /s/ sound while advise ends with /z/ sound, so these are not homophones.

The word advise (being a verb) has several form like; advises in present tense, advised in past tense, and advising in present participle.

On the other hand, advice is a noun and only occurs in the plain form advice. A noun has plural form but the word advice is a mass noun or uncountable noun (similar to water and sand) and does not have plural form.

Note: You cannot use article ‘a’ or ‘an’ with ‘advice’. You cannot say an advice because we do not use definite article with uncountable or mass nouns.

How to remember advice vs. advise?

Advise as a participle

You can use word advise as a participle to describe a noun. Look at the sentence below:

The advising professor recommended only 20 students will sit in a language class.

Using advice and advise in sentences

Hopefully, you have understand difference between advice and advise. Now we will practice these words in different sentences.

Use of advice in sentence

The word advice is a noun and all the sentences below use it as a noun.

Use of advise in sentence

The word advise is a verb and all the sentences below use it as a verb.

Recap to key differences between advice and advise