Pope's Use of Heroic Couplet in The Rape of the Lock 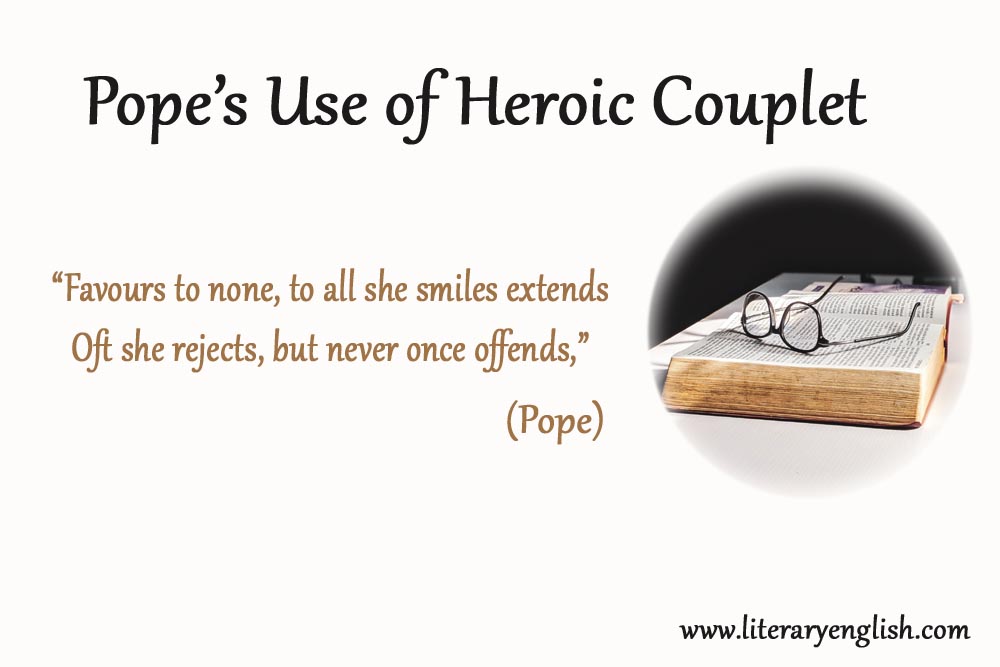 POPE’S USE OF THE HEROIC COUPLET

The heroic couplet is a verse unit of two rhymed iambic pentameter lines. It is “heroic measure” because of its association with the heroic and epic poetry in the seventeenth century under the French influence. The most prominent poet of this age, who used this verse form, was Dryden.

Pope inherited Dryden’s mantle but carried the development of the heroic couplet much further and brought it to near perfection. Pope molded the heroic couplet exactly to his purpose, polished it to the extreme of melodiousness and touched it to sparkle with the utmost brilliance. The heroic couplet, as Pope wrote it, attracts attention to itself as meter does. It is so brief that while reading we notice variations between couplets. We think that he regarded it like it was stanza half contained, if not quite that, as having a beginning, middle and an end. Many of Pope’s couplets may be taken out of their contexts and held up to separate admiration like an occasional lyric stanza, or figurative stanza from the Faerie Queene. It is clear that Pope believed that the couplet was capable of attaining a temporary unit in itself.

We have in this poem, the same seriousness, dignity and elevation, which belong to epic verse. It is only the context namely that the epic generalization is meant to introduce the snipping of Belinda’s lock. It is to create a humorous effect. Pope not only creates situations, which parody the epic events, like Belinda’s arming for the conquests, or her pleasure-ride in a barge on the river Thames. But he also provides direct parodies from the epics and heroic contexts. This is how Pope describes the Baron’s resolution to win Belinda’s lock by force or fraud.

Another epic device, which Pope uses, is periphrasis. It is the device of expressing some idea in a circuitous manner. The tiny pair of scissors with which the Baron cuts Belinda’s lock is as the glittering forfex, the two-edged weapon and the fatal engine. Following the example of Dryden’s Mac-Flecknoe, Pope’s couplets provide a running tension between the serious and the trivial by means of antithesis. The opening couplet of the poem underlines the contract between the heroic and the petty by means of an antithesis between the mighty contests and trivial things. Another poetic device, which Pope had mastered, is the use of Zeugma. They both are to unify and contrast two discordant elements within the same couplet.

Pope’s use of Satire in heroic couplet

Pope sometimes heightens the effect of the satire by providing satirical catalogues. All but one of the items in the whole list goes together. But the one does not bring out the confusion in the values of Belinda’s world is the way how Pope describes the various treasures that decorate Belinda’s dressing table. The only incongruous object here is Bibles. Pope presents it here as a part of the trivialities on Belinda’s dressing table. It is united still more strongly with the billet-doux by means of alliteration in the same way that the first three items are united. Though Pope uses the heroic couplet throughout the whole poem, the effect is not at all monotonous. For not only does he use various devices to provide variety, but also varies the construction of couplets.

The first line consists of one syntactic unit, while the second combines the two. In the third line, sense is allowed to over low, until the middle of the fourth line, while the second half of the fourth line is a single unit. Thus, the successful blending of various poetic devices makes The Rape of the Lock a marvelous work of art. It is this careful, conscious artistry, which led Hazlitt to describe the poem as the most exquisite specimen of filigree work ever invented.

About Authoress: The article “Pope’s use of Heroic-Couplet” is written by Sayeda Javaria. (javaria.hanan@gmail.com).