Belinda's Character : A Depiction of Her Society 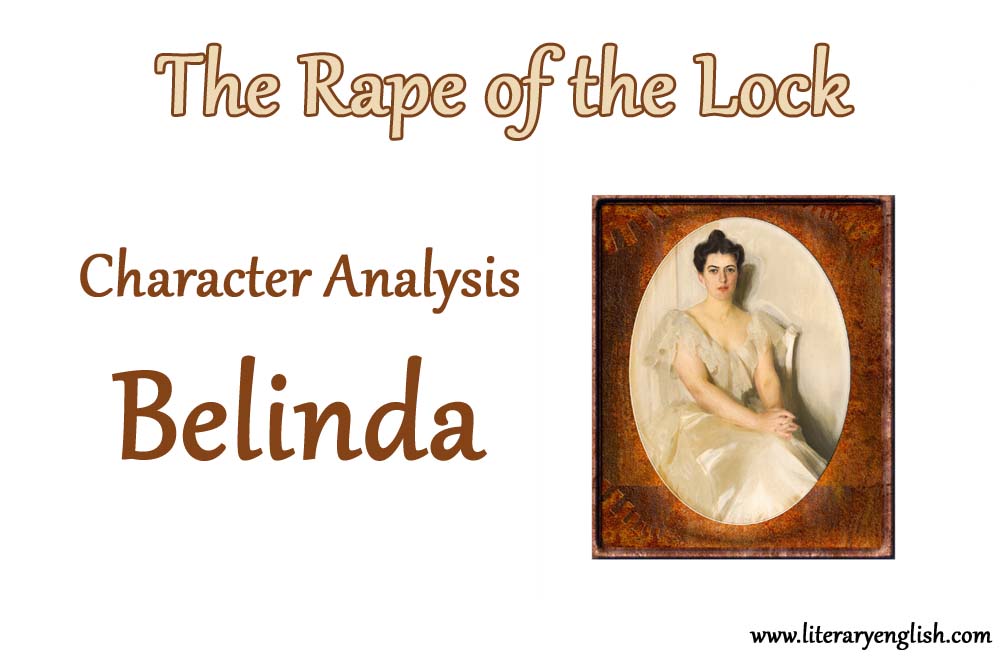 Belinda: A Central Character of the Mock-epic

Belinda is a central character of the play. Opening lines of the poem make it very clear to the readers that Belinda is the central character and heroine of this mock-epic. Belinda is a complex character in Rape of the Lock. Her character is presented under different roles and shades. Her depiction is both satirical and ironical but with a tincture of entertainment. There are lots of controversies among critics about character of Belinda since the publication of the Rape of the Lock. Some consider Belinda’s treatment fair while others consider it unfair.

The whole story of the poem is woven around her unique character. Her every action in the poem is of great significance and catches the attention of the readers. Readers come to know about her way of life and pursuits.

“Favours to none, to all she smiles extends

Oft she rejects, but never once offends,”

Belinda’s character is an outstanding portrait by Pope in his mock epic The rape of the lock. Among all the other heroines in English Literature like Shakespeare’s Caleopetra Ophillia Emillia; Fielding’s Pameila; Eliot’s Maggi; Belinda had been the favorite character of Pop. The way Pope pays attributes to Belinda’s beauty with his pen; it seems that he has been enamored with his own creation. Pope describes her paragon of beauty and wittiness: the goddess of beauty, the nymph, the fair, the rival of the sun’s beams. Pope’s Belinda resembles Shakespeare’s Cleopatra. Like her, she is a paragon of beauty and the winner of men of her age.

“This nymph, to the destruction of mankind,

An Object of Admiration and Mockery

“Law In these labyrinths his slaves detains,

Belinda is a perfect creation of wit and beauty. Pope describes the way she paints and decorates herself with ornaments, diamonds, powders, patches, perfumes and puffs in front of a mirror. Then she leaves to win the heart of lovers.

“Favours to none, to all she smiles extends

Oft she rejects, but never once offends,”

Pope depicts that she passes smiles to the all to win them and flirt on them. All the young fall in spell of her beauty. Her sunny smiles, polished manners, and large shiny eyes make her a perfect trap for the young. Pope mocks at her the way she goes out to Hampton court and participates in different pursuits there. There her pretty locks are raped by the Baron. Pope mocks at her fight with the help of snuff and bodkin. Pope compares her eyes to the sun beams. He places the sun as a rival of Belinda’s eyes.

“Bright as the sun, her eyes the gazers strike.

And, like the sun, the shines on all alike”

Pope admires her for her beauty but on the other hand he also mocks her. There is no doubt that Belinda is a beautiful and charming lady but the way she flirts is mocking and satirizing. Belinda is both an object of mockery and admiration. As a representative of her social class, she is mocked at. She is almost presented as a goddess of beauty. Pope depicts the picture of her toilet describing different items at her mirror table.

Pope mocks at her that how she was fond of pets. Keeping pets was one of the common pursuits of the society. Pope satirizes the ladies who mourn the death of their pets but not their husbands.

“Not louder shrieks to pitying Heaven are cast,

When husbands, or when lapdogs breathe their last”

Belinda is a true representative of fashionable, aristocratic ladies of Popes age. Pope calls her a moving toy shop who keeps flirting. All the ladies of that age were regarded as petty triflers, devoid of serious concerns with life, and engaged in trifling pursuits like playing cards, having pets, sleeping till noon, dance and gaiety. Belinda’s fall represents the corruption of her class. Pope satirizes the flippancy and depravity of 18th century English society through Belinda’s Character.

Belinda is a lady of a romantic nature. She keeps a lively and agile look on her face. She is carefully polite to everyone, and passes her gentle smile to everyone who comes to her as the sun sheds its warmth on everyone. Her physical attraction is enchanting and can shake the faith of anyone. She reveals to us her coquetry and shrewdness. She is totally blind with a sense of pride and arrogance. On the other hand, Belinda is a lady of emotions. She is extremely joyful when she gains victory. We can judge her emotions when she fights with baron and shows the extreme of being exceedingly sorrowful and tearful. Belinda lacks spirituality. She is cautious about her personal reputation rather than spiritual purity and has no sense of moral integrity.

Belinda’s Character in a Nutshell

By concluding all above discussion, we can dare to say that among all the outstanding female characters of English Literature, Belinda is the much more complex character than any other. She is not an individual character but a true depiction of the aristocratic class of 18th century England. Her character reveals the aimlessness, shallowness and purposelessness of the women of Pope’s age. Pope worshiped her beauty clearly and had a prime respect for a girl of charms. The way Pope used a lofty and sublime wording to pay attribution to her heroine in his poem of the “Rape of the Lock“, no other writer had given such sort of honor to his heroine.

Look on her face, and you’ll forget all”