Theme of Imperialism in Heart of Darkness by Joseph Conrad 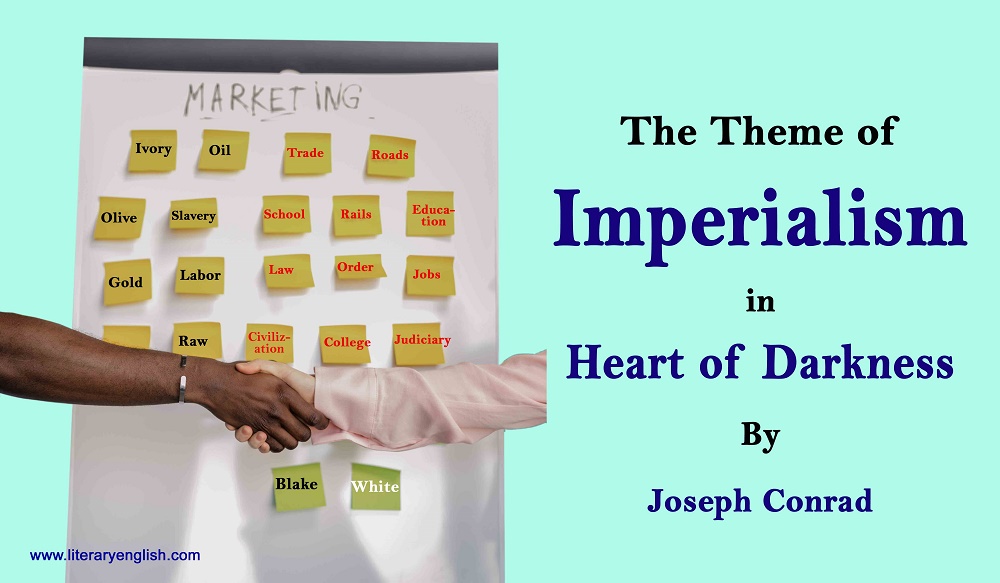 Theme of Imperialism in Heart of Darkness

Introduction to Heart of Darkness

Blackwood’s Magazine published Heart of Darkness as a novella in the 19th century. It was finally published in 1942 in the booking form as the third work in a compilation by Conrad. Heart of Darkness is one of the intense stories that expose the horrifying depths of human corruption and social-psychological dysfunction in Africa’s continent.

The novel, Heart of Darkness, is a much about the exile, bewilderment, and profound doubt as it is about imperialism. Marlow and Kurtz, two main characters in the novel, are at the center of the plot. Kurtz represents avarice and a commercial mindset, a desire for power, a repentant sinner, and the impact of barbarism on civilized people. Marlow, likewise, represents an adventurous spirit and a thirst for knowledge.

Imperialism is a practice of extending power and dominion (control and authority) over distant territories, especially by direct acquisition or by gaining political and economic control of that territory. Generally, there are two sorts of imperialism: colonialism and land conquest. Marlow states they are distinct. Because of their efficiency and their selfless thinking, colonization is justifiable. Although, none of them are pardoned for the consequences; because both lead towards the same outcome. The conqueror and the colonists destroy the country, the indigenous people, and their people.

Major Themes in Heart of Darkness

Heart of Darkness deals with various themes like imperialism and its effect on whites and nonwhites, a journey to self-discovery, order and disorder, deception, pretenses of colonialism, lack of truth, and the meaninglessness of evil.

One of the major themes of Heart of Darkness is imperialism.  At opening of the story Conrad through Marlow mentions the Roman conquest and thereby establishes the truth that the colonialism existed since the early period of human civilization.

Theme of Imperialism in Heart of Darkness

Imperialism is actually European colonization of countries from Asian and African continents for collection of raw materials in cheap labor. However, their agenda was hidden in the slogan of spreading civilization to those who are uncivilized. In Marlow’s journey towards Congo, he is highly skeptical of the European imperialist approach that the colonization of Africa will go in favor of black people. Conrad’s remarks for colonization are no different from conquest (as mentioned in the opening of the story) except in the way that it is presented to the so called civilized European public. Colonization is a strategy to establish control over the indigenous people of a distant country or a distant land.

Parallel to the theme of imperialism, Conrad also highlights that how white people have their views for people of other races. In one of the situations, Conrad states (through Marlow) that conquest of the earth means “taking it away from those who have a different complexion.” In simple words, Conrad is indicating that the Europeans think they are of a higher race compared to other races. Europeans destroy their land by the colonization and eventually steal resources of poor people.

Conrad’s Heart of Darkness stands firmly against every sort of imperialism. Even the title of the novel, Heart of Darkness, points to a moral corruption in the conscience of colonists into the dark when a story depicts the inner corruption of men, especially the colonist Kurtz (deployed at inner station), because of mental corruption and a lack of compassion. Conrad accepts that taking African’s land from the people is not right and condemns it openly. Evidence for this view includes Marlow’s introduction to the tale, wherein he states that, “It was just robbery with violence, aggravated murder on a great scale, and men going at it blind—as is very proper for those who tackle a darkness.”

Marlow observed closely the fatal and dreadful effects of imperialism, including the enslavement, moral corruption, and excessive greed of wealth taking part in Africa. The Europeans claim civilized superiority over Africans, but they reveal only a chaotic desire for wealth by their actions through any means. Marlow witness this situation in Congo that how slave men being led by another white man, he realizes that he is complicit in imperialism.

Marlow ironically states that he “also was a part of the great cause of these high and just proceedings.” The Europeans believe that they are trying to bring civilization to the land of uncivilized black people, but when he arrives at the inner station, all he finds is chaos. Kurtz, at inner station, is pretending to civilize the black people and was engaged in the ivory trade. Up to ivory trade, it was acceptable, but what Marlow sees there was unpardonable. Kurtz was also involved in horrific ancient rituals of sacrificing humans to appease the native Africans to meet his trade objectives. Marlow highlights the havoc of imperialism during his expedition to the heart of Africa.

Background to Literature
The Rape of the Lock
Metaphysical Poetry
Animal Farm
John Keats
Oedipus The King
Othello
W. Wordsworth
The Crucible
William Blake
Prologue to Canterburytales
Pride and Prejudice
Lord of the Flies
Old Man and the Sea
A Tale of Two Cities
Post Views: 297