Main Characters in Heart of Darkness 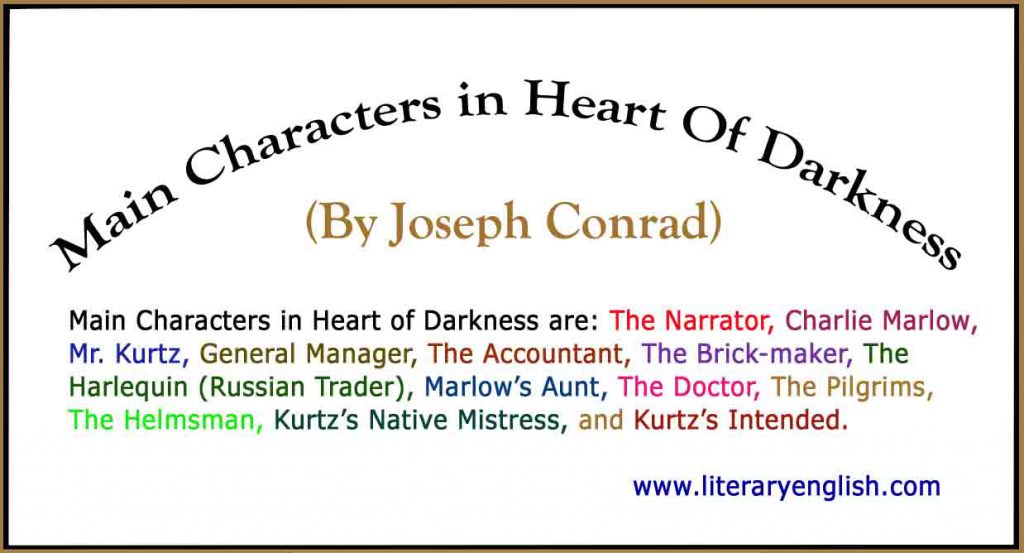 Brief Introduction to Main Character in Heart of Darkness

Below is the brief introduction to all main characters in the novel Heart of Darkness by Joseph Conrad.

The Narrator is an unnamed man who relates Marlow’s story to the reader.

Charlie Marlow is man who is the protagonist of the novel Heart of Darkness. He is a master storyteller and able to catch attention of his listeners into his tale. His expedition of voyage towards Congo River reveals the core of Conrad’s novel. Marlow pilots a steamboat to relieve Mr. Kurtz and on his journey observes things minutely. He was finally shocked by what he sees at inner station that what European traders were doing to the natives.

Kurtz is the character in heart of Darkness that creates curiosity among readers. He is the man who is chief of the Inner Station for a British trading company. Mr. Kurtz is the major quest of Marlow. He has a God-gifted talent as he is a painter, musician and a persuasive man at a same time. He collects ivory there for trade and is remarkably effective at acquiring ivory. A welleducated European, he is described as a “universal genius” and begins his work in the Congo as part of a virtuous mission. However, while at inner station in the mid of jungle, he sets himself up as a natives god. By the time Marlow reaches him, he is breathing last sighs and dies during retrieval on the ship.

The Manager is chief agent of company at Central Station and oversees the Company’s activities in the Congo. The character of the Manager is based on a real person, Camille Delcommune. The Manager is average in appearance and possesses a strange capacity to cause uneasiness in people around him. Marlow successfully judges him as a person responsible for the wreck of his steamboat.

The Accountant is also working at Outer Station. He an efficient worker and a well dressed man who has a trained native woman to care for his wardrobes. When Marlow meets him, he complains about the groans of a man who is dying and brought to his office for fear of being distracted and making clerical errors in the Company’s books. He also discloses to Marlow some of the Company’s shady business practices.

Brick-maker is the man who has a task to make bricks but he does not make any bricks because of a shortage of materials. He is one of the favorite man of the Manager. When Marlow meets him at the Central Station, Marlow suspects that he is “pumping” him for information about the Company’s plans.

The Harlequin is a Russian freelance trader who has gone into the African interior as a trading representative of a Dutch company. He is devoted disciple of Kurtz and admires him immensely. His remarks about Mr. Kurtz are, “This man has enlarged my mind.”

Marlow’s Aunt is his doting relative and uses her influence with the wife of a high company official to get a post as a steamboat pilot for the Company for Marlow. She belies that imperialism is a charitable activity that brought a civilization and religion to the savages.

When in Brussels, Marlow is examined by the Doctor at the Company’s headquarters. He is interested in the effects of the jungle (and the lack of restraint it offers its inhabitants) on European minds.

The Pilgrims are European greedy agents who are waiting at Central Station for a chance to be promoted to trading posts, so they can then earn a share of the ivory they ship back but none of them actually takes any serious steps toward achieving this goal. They hate natives and treat them like animals.

The Helmsman is a native crewman on Marlow’s steamboat trained by Marlow’s predecessor. During journey on the boat, he is killed by an attack b natives hiding on the river bank.

Kurtz’s African Mistress is a beautiful woman loaded with jewellery who appears on shore when Kurtz leaves the Inner Station. She speaks nothing and leaves a deep impact on the mind of Marlow.

Kurtz’s intended is a young woman waiting for Kurtz’s arrival. Marlow visits her after the death of Kurtz and lies to her about her fiancée’s last words.