The Rape of the Lock as a Mock Heroic Epic 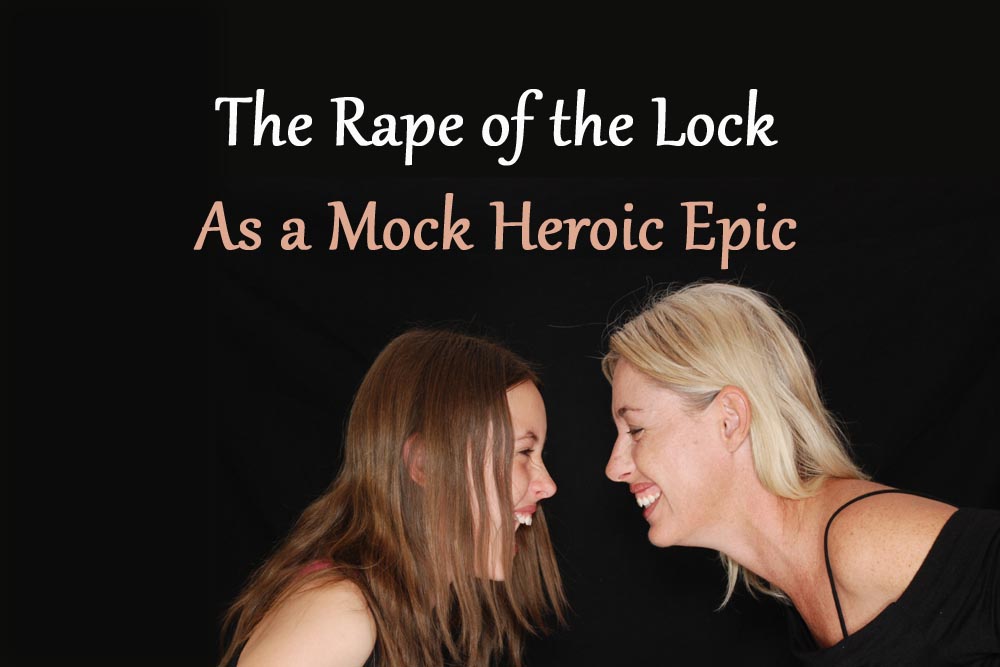 What is mock-heroic epic?

A mock-heroic epic is a poem which uses a formal and grand style to describe a trivial or common subject for which this style is not suitable. This leads to a comic effect since the style of the mock poem is mismatched with the subject. Rape of the lock is one of the best examples of mock-heroic epics. In mock heroic poetry, the central character is not brave and adventurous unlike in heroic epic. The lofty and hyperbolic language is used in mock heroic epic to describe a trivial or a common matter in a satiric or ridiculous way.

Pope makes it quite clear at the very outset that his poem is a mocking one, when he promises us a narrative of towering anger and conflict springing from “amorous causes”. The poem is prompted by an occasion involving actual people and invokes the Greek Muse. Thus, the poem has a social, as well as a literary context. However, whereas Homer’s or Virgil’s subjects were grand, Pope’s the Rape of the Lock is the trivial cutting off of a lock of a maiden’s hair. The object of the poem, therefore, is civilized mockery and it implies a criticism. Mockery, however, is double-edged. Pope hits two subjects simultaneously, the great epic form, the last of whose manifestation was Milton’s Paradise Lost and life itself, the characters, the well-bred Lord, the gentle belle, Sir Plume.

The laughter evoked promises to be silvery and urbane, and yet the fierceness of the verb assault belies this assertion.

Both Literary and Moral satire:

The occasion of the writing of the poem was a quarrel between two families over the cutting off a lock of hair of a girl by a Lord. It was a request to Pope to write a poem to make the two families laugh it away. Pope, when he undertook the composition of the poem, had this primary aim but literary satire and moral satire followed quite naturally. Pope’s purpose was a moral one, he held women’s freaks, humors, spleen and vanity to be responsible for much discord, and he inserted a speech by Clarissa on purpose to point the moral.

Pope’s  Vein Compared with Others:

The mockery of the mock heroic is as old as epic itself. We begin with Aristophanes and pass through Don Quixote and Bioleau’s Lutrin. Nun’s Priest’s Tale in Chaucer’s Canterbury Tales is also in the same vein. Pope, therefore, was not attempting anything new but was improving on what had already been done. He tried to produce something better by pushing the same principles to their logical conclusion of completeness, proportion, delicacy, and homogeneity.

The Machinery Used in Mock-Heroic Epic:

The Rape of the Lock is the masterpiece of the mock heroic as it mocks at the maximum amount of the epic. The mockery takes different forms and employs different devices. Apart from the general mockery of the epic form, in its similes, and the epic matter with its machinery, its battles, its journeys on water and down to the underworld, its harangues, there is particular mockery of a detail. There is a certain speech or a comment in the person of the poet. Also, the scale of mimicry is always varying. We find Belinda flashing lightning from her eyes, screaming like the Homeric heroes but against the bulk of Hector, she is only a girl, a mere fashionable lady. We find altar at which ardent prayers are fatefully half-granted. In addition, people worship a goddess.

However, the altar is built of French romances and the goddess is the image of the vain Belinda, in the mirror of her dressing table. We find a battle drawn forth to combat, like the Greeks on velvet plain, but it is only a game of cards on a fashionable card table. We find a supernatural being threatening his inferiors with torture but it is a sylph, not Jove. Moreover, the tortures are neither thunderbolts nor pains of Hades, but cruelties devised ingeniously fan the requisites of the toilet table.

The Use of Spiritual Machinery in Mock-Heroic Epic:

Pope thought the first version incomplete without the spiritual machinery. No doubt, he had already made the action of his poem, taking place on the knees of the gods. It was Heaven and the powers, which, granting half the Baron’s prayers, wrested from his fingers the lock they had allowed him to cut. But from the start, it must have been obvious to Pope that the epics usually allotted their heavenly creatures more room and color than his own poem did, and his literary mockery kept increasing in quality according to the supernatural machinery’s quantity. When it was time for additions in the poem, it had to be ranged from a single couplet to passages of hundred lines. Pope knew that he could not just add the character of sylphs. He would have to cleverly develop and create their role to make it work in the poem.

Mockery — both Human and Literacy:

The additions made were for improving the literary mockery; they were also helpful in the improvement of human mockery. The chief excellence of the satire, afforded by the additions, consists in the way they mock human and literary matters simultaneously. We can see how obvious it is in every way. Pope could not let the sylphs affect the central action of a poem, which was still complete if they were not involved. He, therefore, makes them to desire to affect it, to only be prevented from doing so by force within the poem itself. Belinda herself renders them powerless. Her would-be protector Ariel has warned her that trouble is ahead, but his help is important when she transgresses the very condition, which gives him power.

Didactic Purpose of Rape of the Lock as a Mock-Heroic Epic:

The Rape of the Lock is indeed a magnificent magnum opus whose design is subtly laid so that there is a condensation of meaning, and layers of underlay enhance the pleasure of discovery by the discerning reader. Pope’s aim was correction of the foibles and follies of the artificial society by making them laugh at themselves. He tried purging them of the dress so that their innate purity may shine. It is certain that Pope did not lose hope in humanity and was conscious of man’s innate goodness.

About Authoress: The article “The Rape of the Lock as a Mock-Heroic Epic” is written by Sayeda Javaria. (javaria.hanan@gmail.com).