Social Satire in The Rape of the Lock

In this article “Social Satire in The Rape of the Lock”, students will learn how Alexander Pope used satire to highlight follies of 19th century England. For more articles on Rape of the Lock; jump to end of the page. 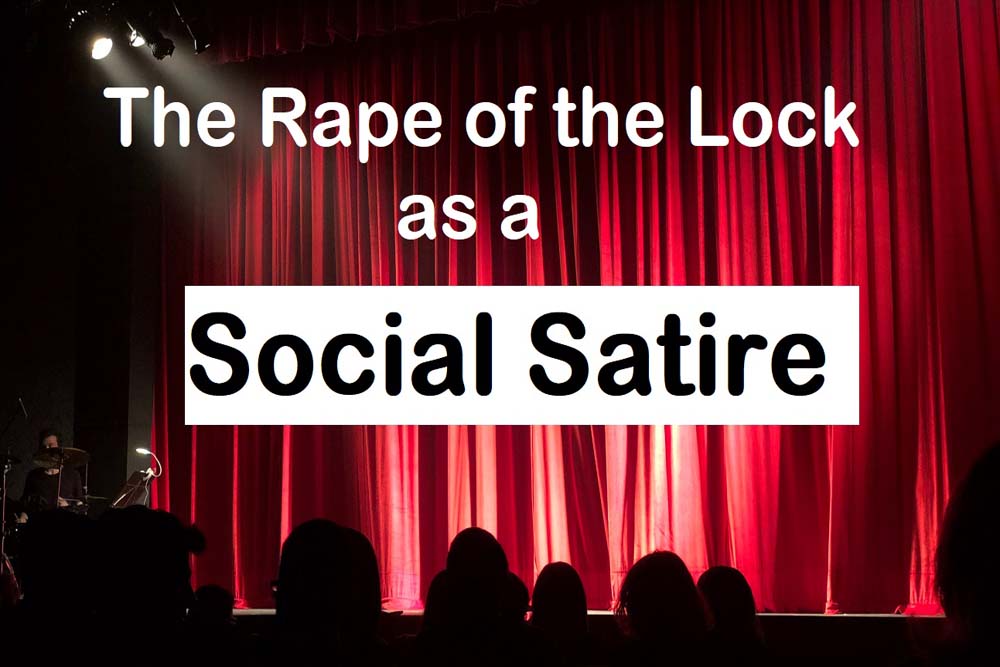 Social Satire in Rape of the Lock: Pope’s Satire

Alexander Pope was one of the best satirists England has ever produced. The function of a satirist is didactic and his object is the reformation of humankind and their follies and foibles. The satirist has a yardstick of conduct. He has weapons like wit, mockery, humor, ridicule and irony. Pope has been accused of venom and pungency, which are attributed to his physical deformity. However, a close look at the “The Rape of the Lock” would show that Pope has a wide range and, unlike Swift, he is quite capable of sympathetic understanding, ironic humor, as well as venomous castigation. Nevertheless, most of the time, he is elegantly polished and can say bitterest thing with urbanity.

Why Pope wrote the Rape of the Lock as a Social Satire?

The event of the writing of The Rape of the Lock was a quarrel between two families over a trifle, the cutting of a lock of hair of a girl by a lord. The Pope was commissioned to write a poem to make the two families laugh it away. It was a difficult task because Pope had to point out the triviality of the episode without giving offence to either party. Judging by the events, Pope perhaps did not succeed because the Lord in question married another woman with greater fortune, but the result was an incomparable mock-heroic poem.

The poem is incomparable in design and execution, with combination of the gay and the serious, and the sparkle of wit and humor, which it irradiates. When Pope began the poem, he meant to concentrate upon the woman in question, but he was so carried away by the subject, he slipped from particular to the general. Belinda became a representative figure of the 18th century high society and Pope’s picture of her turned out as a satirical picture of that society.

It is averse that Pope’s attitude towards women was disdainful, perhaps because of a lack of sympathetic understanding on the part of women for the deformed poet. However, there are many indications in the poem to show that a sweeping statement of this kind is unfair. In the beginning of the poem, Pope pays homage to the beauty of Belinda, which has a ring of sincerity in it.

Besides, his attitude towards Lord Petre is also one of contempt, when he describes the smallness of his stature, his addiction to French romances or his insincerity in taking love as a sport. If women had the “toy shops of heart”, men also had a hollow attitude towards the finest of human emotions, which is love. Moreover, Pope’s description of the pitfalls that attend women in the form of the treacherous friend, “the daring spark” has a hint of pitying sympathy.

Along with the consciousness of their vanity and coquetry, their love for Ombre, their pride, their disdaining of offers and dreams of beaus and dukes. Even when he makes the Sylph give an account of the large number of sylphs, which attend upon a woman of quality, there is a dual consciousness of surface grandeur. Baron’s actions represent the competition between young kings for the attention of beautiful women, which was witnessed by the charming Belinda.  However, Belinda did not pay any attention to him, which made him frustrated and he wanted to cut the locks of her hair.

Female Vanity as a Piece of Social Satire in Rape of the Lock:

According to Pope, women are vain, no doubt. They are a prey to their own vanity but they live in a world of treacherous men who are out to take advantage of their helplessness. Men are full with the battery of insincere expression of love. Women need protection because they are so helpless against the guile of men.

Indirectly, through the role of Belinda, Pope is portraying women in society of that time.  At the very beginning of the poem, we become aware of the laziness, pimping and manipulation of the so-called fashion-loving women, such as getting up late, keeping pets. Pope has portrayed Belinda’s character as an example of exaggeration of women on their dressing table. Women spend most of their time in the toilet. They use various ornaments and absorbents, roses, puffs and powders for their makeup. Women mostly love their beauty and feel excited standing in front of the mirror. Sometimes, it seems as if they are presenting their own image in the mirror, as the goddess whom they serve.

Then we see another trend of beautiful women of that time. They liked to be complimented by men, but never show any of the fans the symbol of attraction. They just thank them and smile at them. They often had to turn down offers, but they never hurt anyone.

The poem also refers to the latest fashions in the dress and decoration of this society, for example, millions of tables, a collection of china, a lap dog from Ireland, diamond earrings, etc. Rich drinks such as citron water, chocolate Tea and coffee.

Towards the beginning of Canto III, we get an excellent account of society’s explanation of the Hampton Court. It is the place where the inhabitants of the United Kingdom often gather to predict the removal of foreign dictators, and the beautiful women of England. In Hampton Court, Ann, who ruled in three circles, held her council and sometimes just a tea party.

Sylphs become a symbol of women’s social behavior. Principles such as honor and chastity have not become another part of traditional affairs. Pope made it clear that these women were not operating based on abstract moral principles, but through a broader social system.  Society as a whole is as guilty as women themselves.

About Authoress: The article “Social Satire in the Rape of the Lock” is written by Sayeda Javaria. You can find her on javaria.hanan@gmail.com