What is Literature?
(Definition of Literature by Celebrated Authors) 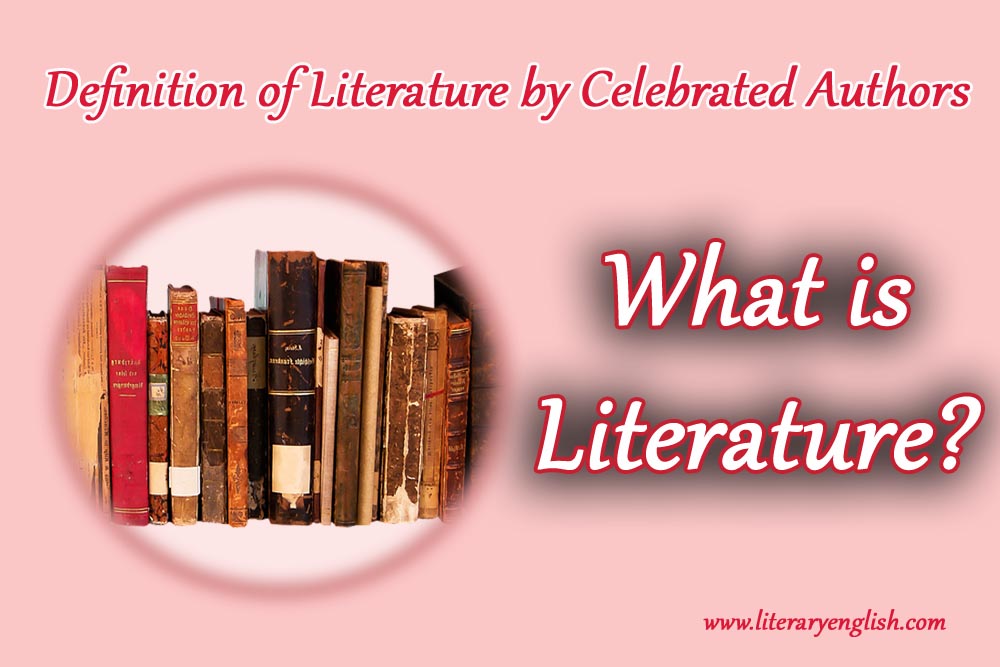 The word ‘Literature’ is a modified form of a Latin word (literra, litteratura or litteratus) that means: ‘writing formed with letters’. Let us look at what is literature according to definitions by different celebrated literary personalities.

Definition of Literature According to Different Writers

Throughout the history of English literature, many of the great writers have defined it and expressed its meaning in their own way. Here are the few famous definitions of literature by timeless celebrated authors.

Virginia Woolf:  Virginia defined literature in a perfect way. “Literature is strewn with the wreckage of those who have minded beyond reason the opinion of others.”

Alfred North Whitehead: “It is in literature that the concrete outlook of humanity receives its expression.”

Henry James: “It takes a great deal of history to produce a little literature.”

Lewis: “Literature adds to reality, it does not simply describe it. It enriches the necessary competencies that daily life requires and provides; and in this respect, it irrigates the deserts that our lives have already become.”

Oscar Wilde: “Literature always anticipates life. It does not copy it but moulds it to its purpose. The nineteenth century, as we know it, is largely an invention of Balzac.”

Chesterton: “Literature is a luxury; fiction is a necessity.”

Forster:  The definition of literature by Forster is much interesting. “What is wonderful about great literature is that it transforms the man who reads it towards the condition of the man who wrote.”

All of these definitions of literature by great writers present different aspects of it, and shows that in how many ways it can be effective.

Literature: A Depiction of Society

It might sound strange that what is literature’s relation with a society could be. However, literature is an integral part of any society and has a profound effect on ways and thinking of people of that society. Actually, society is the only subject matter of literature. It literally shapes a society and its beliefs. Students, who study literature, grow up to be the future of a country. Hence, it has an impact on a society and it moulds it.

According to different definitions of literature by authors, it literally does the depiction of society; therefore, we call it ‘mirror of society’. Writers use it effectively to point out the ill aspects of society that improve them. They also use it to highlight the positive aspects of a society to promote more goodwill in society.

The essays in literature often call out on the problems in a country and suggest solutions for it. Producers make films and write novels, and short stories to touch subjects like morals, mental illnesses, patriotism, etc. Through such writings, they relate all matters to society. Other genre can also present the picture of society. We should keep in mind that the picture illustrated by literature is not always true. Writers can present it to change the society in their own ways.

The Effects of Literature on a Society:

The effects of literature on a society can be both positive and negative. Because of this, the famous philosophers Aristotle and Plato have different opinions about its effect on society.

Plato was the one who started the idea of written dialogue. He was a moralist and he did not approve of poetry because he deemed it immoral. He considered poetry as based on false ideas whereas the basis of philosophy came from reality and truth. Plato claims that, “poetry inspires undesirable emotions in society. According to him, poetry should be censored from adults and children for fear of lasting detrimental consequences” (Leitch & McGowan). He further explains it by saying, “Children have no ability to know what emotions should be tempered and which should be expressed as certain expressed emotions can have lasting consequences later in life”. He says, “Strong emotions of every kind must be avoided, in fear of them spiraling out of control and creating irreparable damage” (Leitch & McGowan).  However, he did not agree with the type of poetry and wanted that to be changed. (read Plato’s attack on poetry)

Now Aristotle considers literature of all kinds to be an important part of children’s upbringing. Aristotle claims that, “poetry takes us closer to reality. He also mentioned in his writings that it teaches, warns, and shows us the consequences of bad deeds”. He was of the view that it is not necessary that poetry will arouse negative feelings. (Read Aristotle’s defense of poetry)

Therefore, the relation of literature with society is of utter importance. It might have a few negative impacts, through guided studying which we can avoid. Overall, it is the best way of passing information to the next generation and integral to learning.