Aristotle's Defence of Poetry against Plato's Charge on Poetry 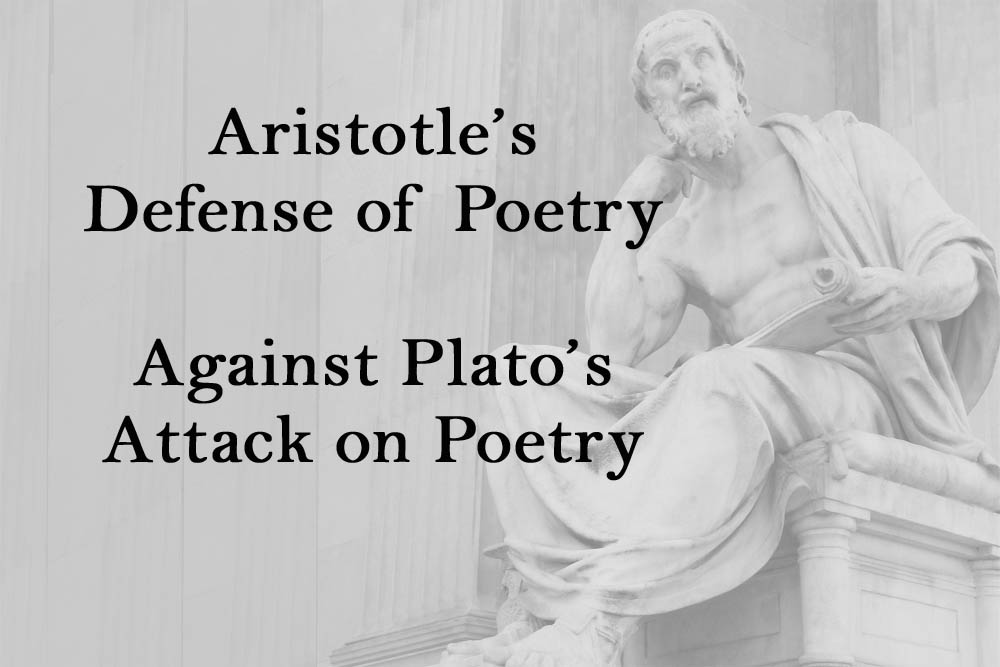 Aristotle’s Defence of Poetry against Plato’s Charge on Poetry

When we read Greek concepts of poetry, we come across two different theories: One is attack on poetry by Plato and second one is defence of poetry by Aristotle. Greek intellectuals who proposed these two opinions regarding poetry were Plato and Aristotle. Aristotle was very intelligent and favorite disciple of Plato.

Plato attacked on poetry on multiple grounds like, moral, ethical, intellectual, slavish imitation, twice removed from reality, mother of lies, inferior to history, unhealthy influence on the morality of the young and emotional disequilibrium.

Aristotle comes forward in the defence of the poetry in the form of his work Poetics. The Aristotle’s Poetics deals with poetry and tragedy. Plato charges poetry as the mother of lies and Aristotle proved that it was not so. Being a disciple of Plato, Aristotle also followed his master’s theories. He elaborated his master’s theories and modified them to create his own theories in the form of Poetics in defence of poetry.

Similarities between Plato and Aristotle on Views of Poetry

Both intellectuals considered poetry as an art of imitation. They also agreed upon that it creates and arouse emotions. Thirdly, poetry is source of pleasure. Lastly, that poetry leaves multiple effects on personality of humans.

Major differences between Plato’s and Aristotle’s Concept on Poetry

Aristotle’s Answer in defence of Poetry

Plato opined that imitation removes us away from the reality. He considered an imitation a mere illusion of things or photographic representation of phenomenal world. Whereas, Aristotle declined it and proposed that art imitates the universal realities of the ideal. Aristotle says that no doubt poetry is an imitation but a creative imitation that expresses concrete things under an image that has an idea based on truth. It involves the effort of the imagination and intellect. He says that a work of poetry is an idealized representation of a poet’s real life i.e. of character, emotion, action.

Poetry as an imitation

Both considered poetry as an imitation of a real phenomenon but differed on the worth it has. Plato considered this imitation in a derogatory sense. Plato considered it as a mere mimicry that lowers the dignity what it imitates. Aristotle takes imitation as a creative process that has essence of truth in it. According to Aristotle, poets create something new by imitating reality. Therefore, he placed a poet higher than a philosopher or historian.

While Plato compares poetry with painting. Aristotle compared it to music. Plato opines that fine art is twice removed from reality and truth but Aristotle says the fine art is the manifestation of a higher truth. According to Aristotle, the work of arts is not a semblance and does not oppose to reality but it makes an idea more apparent and bright than the real world. Plato considered poetry as a copy of nature but Aristotle argued that the scope of art is concerned with “what ought to be” or “what can be”. According to Aristotle, fine art idealizes the reality.

Plato blamed poetry for bad influences like morally, intellectually, and emotionally. He condemned dramatic poetry and epic for causing excitement of undesirable emotions making life morally corrupt. However, Aristotle says that the core idea of writing poetry (an epic or a tragedy) is just to amuse or to provide aesthetic pleasure to the listeners or readers.

Poetry is not Utilitarian

Plato charged poetry that is it not utilitarian and not a beneficial subject to teach students because it does not teach something useful like morality. However, he forgot while making this charge against poetry because poetry is a subject which is quite different from philosophy. It is the object of philosophy to provide philosophical views and morality to the learners and it is not wise to expect the same thing from literature. Aristotle says, the objective of literature is not preach lessons or gives some moral thoughts. Teaching morality is the duty of philosophy. Hence, this charge of Plato against poetry was futile. Plato being an idealist believed in ‘Art for Life sake’ whereas Aristotle being a realist believed in ‘Art for Art sake.’

Plato also charged poetry for losing the mental ability of reasoning and being more emotional if students were taught poetry. But, Aristotle replied to this charge by theory of Catharsis. The theory of catharsis reveals that when people read a tragedy or witness a tragic scene, they tend to become more emotional because of attached sympathies to the tragic figure. When they undergo this process, they cleanse off the excess of emotions in them. Catharsis gives them a relief and further makes them feel stronger and they become able to face such high emotions in real life.

Apart from the charges that Plato has put on the poetry, the literary world is very much thankful to both Greek philosophers who made their contributions in the field of literature. Plato is the one who laid the foundation stone for all the critics and Aristotle defined the rules, boosted up the poets not to discourage from such critics, and provided them a perfect specimen to write a poetry and tragedy.