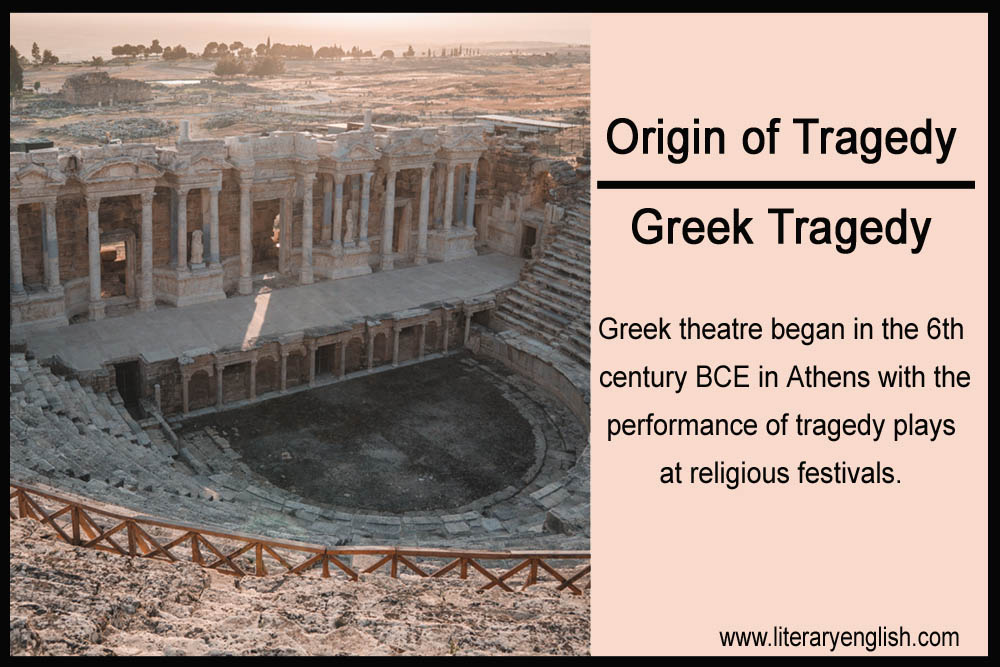 The Concept of Greek Tragedy

The concept of Greek tragedy was created in Athens. Its subject matter was normally drawn from the mythology, oral stories, stories about supernatural beings and gods. These stories transferred from generation to generation orally. When we focus on vague canvas of Greek literature history, we come to know that there was a very short period when Greek tragedy reached to its climax. This period starts from 480 BC When Aeschylus wrote tragedies to the period of Sophocles and Euripides at the end of 406BC.The performance of these tragedies was part of religious celebrations.

The Origin of Tragedy

There is no perfect trace to the origin of tragedy but it is associated with tragic dialogues or a song performed by a chorus generally performed in 7th century BC during performance on stages. The tragic dialogue may have been influenced by dramatic reaction of epic and other heroic poems. The term tragedy may be associated with a Greek word stasimom (a stationary song).

Aristotle traces its origin in two ways: in first way, the tragedy developed from a choral dance (dithyramb: a dance performed by 50 singers) connected with the worship of Dionysus, and secondly that it is development of satyric. Here the word satyric may refer to the saturoi or the attendants of the play who were also called tragoi because they wore goat’s skin. This further reveals about the word for a goat dance: tragoidia.

The relationship of goat with tragedy is not known but there are few possible assumptions.

1.    The first assumption reveals that the dancers in the performance were disguised wearing goat’s skin as in dithyramb (a dance connected with the worship of Dionysus).

2.    The second assumption reveals that goat was offered in a prize in stage performance competition.

3.    Some scholars relate it to sacrifice of a goat to please gods.

4.    Even some scholars like Dante relate goat song to bleating of goats because goats are noisy and chorus members sung loudly like goats making noise.

The Climax of Greek Tragedy

The Greek tragedy flourished during 5th century BC. This era include nearly hundred years from 500 BC (the era of Aeschylus) to 400 BC (the era of Sophocles and Euripides) when Greek tragedy was popular in Athens and in other cities. Each spring Athens held a festival at which many playwrights submit their plays for competition. Each playwright hired a sponsor (choregos) who hired three actors and a band of chorus for performance. Each playwrights rehearsed his own actors to perform well to win the competition.

Later on, the themes of tragedy changed to love, intrigue, jealousy, loss of power, pride, and the fraught relationships between men and gods. In Shakespearean tragedies, the Greek concept of tragedy that “destiny controls a character” was changed to “character shapes his destiny”.

There are hundreds of playwrights who participated in dramatic festivals held in each spring in Athens. Due to only oral stories and song, the Greek literature could not survived for a long time. Only four well-known playwrights could survived because of their popularity and number of huge works. These playwrights include Aeschylus, Sophocles, Euripides, and Aristophanes.