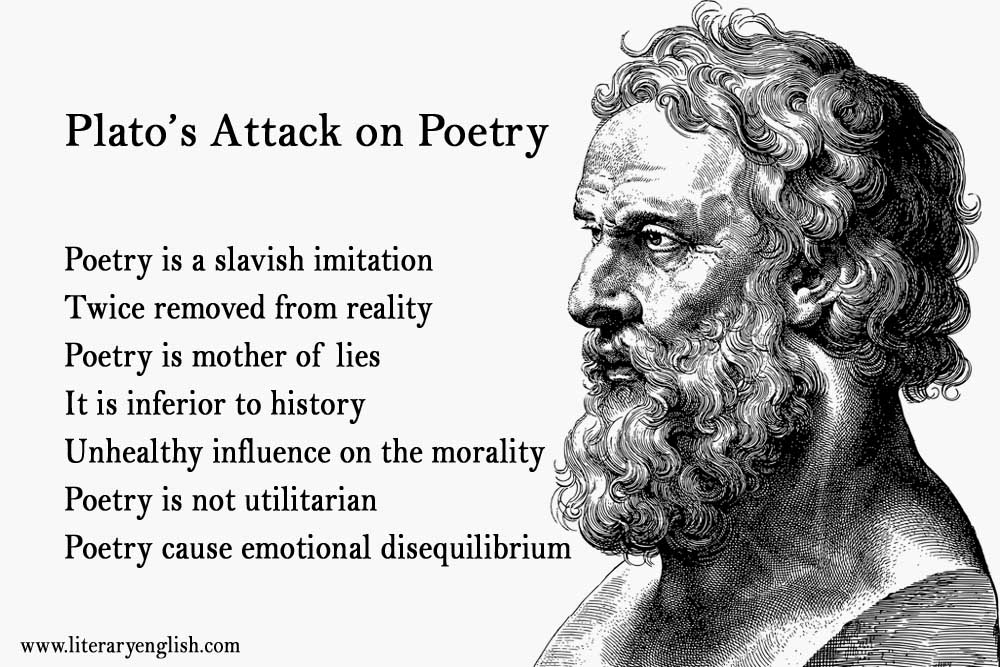 Introduction to Life and Works of Plato’s

Plato was born in 427 B.C., in Athens. He was from a distinguished family background with many political connections. He grew up in a city in era of Peloponnesian War which began just after his birth and lasted for more than two decades resulting defeat and humiliation for Athens. The end of war resulted political decline and uncertainty. In 399 B.C., Socrates was put to death on charge of immorality and corrupting the young.

Background of Plato’s Attack on Poetry

After the death of Socrates and political unrest after war, education was in sorry state and there were only Homer’s poetry was the traditional Greek mode of education for young when achieved maturity. Homer’s epics were essential part of educational curriculum. This curriculum was one of the basic reasons for Plato’s attack on poetry which he discussed in his Book II of the Republic. The golden era of Greek art was over and creative impulse had died away. The contemporary literature was immoral and of no quality which made Plato to criticize it for improvements. Due to this, sorry state philosophers and orators were preferred to poets.

Plato attacked poetry on many grounds which include intellectual ground, emotional ground, ethical ground, influence of existing curriculum, lack of reality, and illogical and irrational nature of poetry. Let us discuss on by one in more detail.

On intellectual grounds, Plato’s views were very strong. He said that poets have no knowledge of truth but they just imitate only appearance. He placed work of art into third place from the truth. He compared a poet with a painter who imitates reality.

In Book X of Republic, Plato describes that poetry feeds and flourishes desires and passions instead of removing them. Plato says that such emotions put us in an illusion and one suffers himself to experiences the emotions which he will never like in real life. Plato calls such imaginary passions and emotions bastard and illegitimate; they encourage weakness and do not reconcile with the exhortations of philosophy. Plato asked how poetry could be right which creates sorrow and woes that no one likes in his real life.

The Plato’s ethical objection to poetry is that it tells lies about the gods and many of the stories told by poets are immoral. Therefore he is against Homer and Hesiod’ poetry. He is also against allegorical interpretations that how a child can differentiate an allegorical and literal text. The mythological poetry of that time was full with lust and treacherous tales which was immoral for young. He was also against those tales for children which make frighten causing them making coward in real life. According to him, drama is equally detrimental to the morals of the public and encourages licentiousness and lawlessness. Similarly, in his views, drama appeals to love that is known as sensational.

Plato was against the curriculum which was taught to the young learners. Most of the syllabus was based on poetry of Homer including his epics and Hesiod’s poetry. He was against poetry which, according to him, was immoral and based on fake stories on gods. He focused on moralistic syllabus and based on reality rather than imitation of fiction. He preferred philosophy on poetry for the curriculum.

Plato’s views on poetry are like painting which is resemblance to a real object.  He says that painting imitates by colors and on the other hand poetry imitates by words but function is same: that is imitation. He blames poetry for lack of reality and truth in it. Most of the literature on gods is fabricated and immoral that is far away from reality and truth. Most of the characters in epics are treacherous and false those are illegitimate.