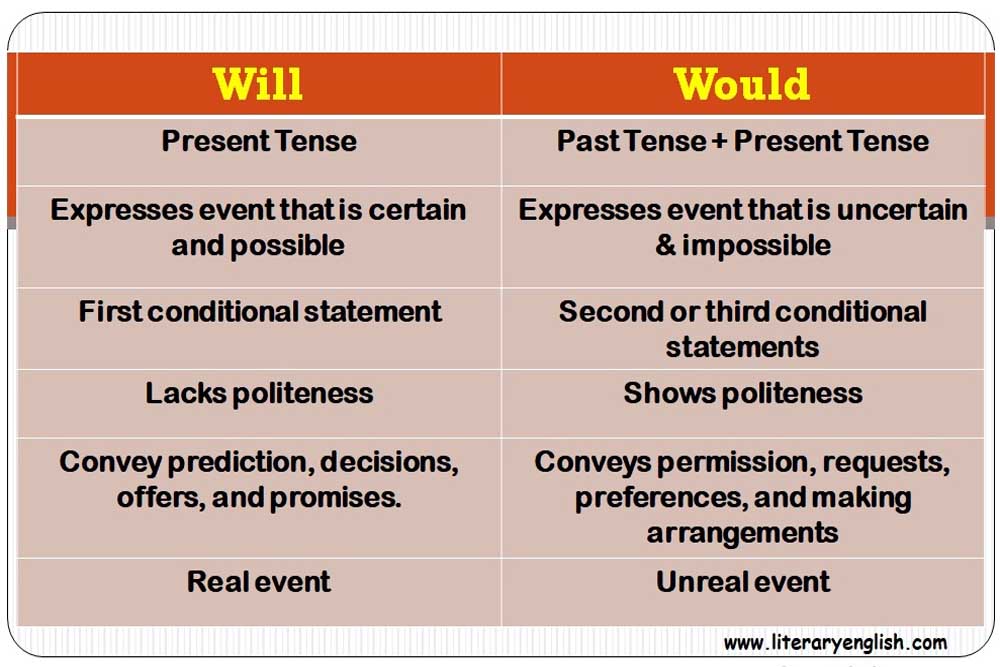 “Will” and “would” are modal auxiliaries in English grammar that are frequently used in sentences and are a central part of English grammar. Both words have some similarities that make it difficult to use and require sufficient attention to use them properly in a sentence to achieve correct meaning of a sentence. Wrong use of these modal auxiliaries can cause confusion to understand the meaning of the sentences. That is why, it is important to understand when to use modal verb will and when to use modal verb would. Here you will find some guidelines regarding correct usage of will and would in English grammar.

When to Use the Word Will?

First use of will

The word “will” is used as a modal verb in English grammar to talk about a prediction (an event that might happen in the future). It describes some action that may happen in future or someone’s intentions of doing something in the future. Its common use is in definite statements. Look at examples to understand when to use will.

“The sun will rise at 6’O clock tomorrow “

“I will be on duty after one week vacations.”

Second use of will

The modal verb “will” is also used to make promises & offers. Look at example to understand usage of will for a promise.

“I will send you some mangoes of my farm.”

“I will buy you a gift for your wedding.”

Third use of will

Sometimes we use it as a first conditional statement. Look at example:

“If you work hard, you will pass the exam with A grade.”

“If you do not follow instructions, you will face a trouble.”

Fourth use of will

We use modal verb “will” to express some beliefs. Look at examples below:

“I believe you will never tell her about my intentions.”

“Capitalists believe the country will progress under their control”.

Fifth use of will

We also use modal verb “will” to express a decision. Look at examples below:

“I am feeling hungry; so first I will have dinner.”

“I need more marks; I will work hard in next exam.”

When to Use the Word Would?

First use of would

The past tense form modal verb “will” is described as would. The modal auxiliary would is used to express a past event that didn’t happen. Look at Example below:

“We thought we would be in Ulm by next Sunday.”

Second use of would

The word “would” can also be used to describe an event that is unreal or an imagination. Look at Example below:

“If I had four eyes, I would see all around.”

“If water is available there, the Mars would be a planet to live.”

Third use of would

By using modal verb would anyone can report the past conversation. It is also used to express an event held in the past. Look at Example below:

“I wasn’t feeling fresh, so I would have a cup of coffee.”

Fourth use of would

We can also use it with past perfect tense. Look at example below:

“If you run fast, you would have first position.”

“If you went to a nearby music school, you would have become a professional musician.”

Fifth use of would

We also use the modal verb would to express polite expressions like requests or permissions. Look at example below:

“Would you mind lending me ten rupees?”

Some Main Differences Between Will and Would

The word “will” is used to express definite events or things that are going to happen in future. In contrast, the modal verb “would” expresses an event or thing that is not certain or no longer possible in future or in past as well.

In English grammar, we use “will” only in present tense but on the other hand “would” is used in past tense as well.

In a sentence, the word “Will” is applied to convey prediction, decisions, offers, and promises. On the other hand, the word “would” conveys permission, requests, preferences, and making arrangements.

The word “will” is used as a general word that lacks politeness while the modal verb “would” shows politeness in a sentence.