Difference Between Can and Could 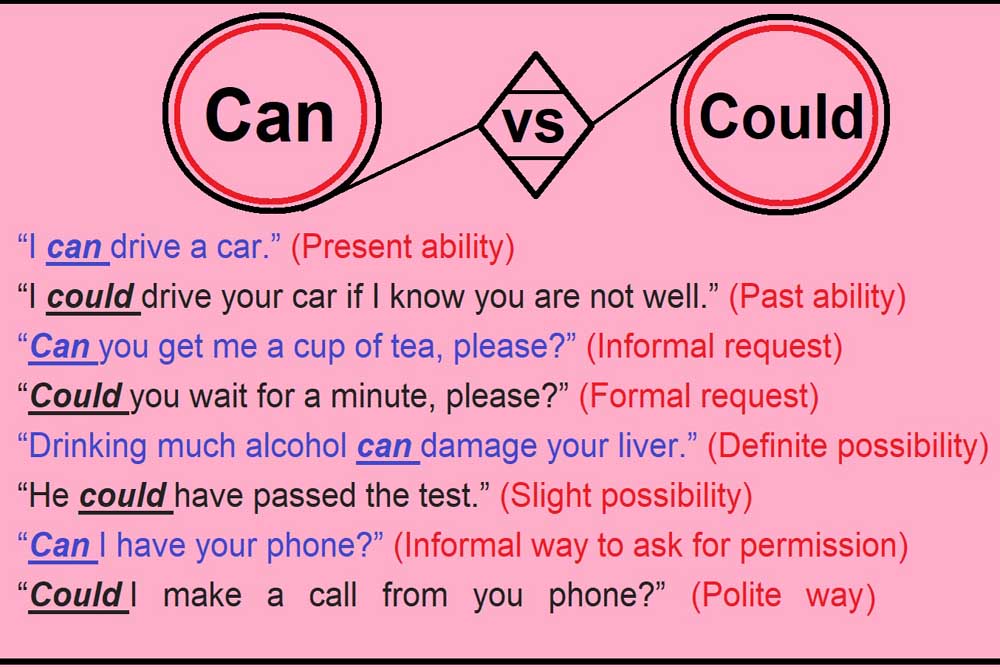 Can and could are modal verbs and we use them with main verb to elaborate the function and meaning of the main verb in a sentence. Can means be able to do something or permitted to do in the present situation whereas could refers to the possibility or the ability to do something in the past. Both are used in same way but can is informal while could is used for polite expressions.

“Can you pass me the book?” (Informal request)

“Could you give me your book?” (Polite request)

Definitions of Can and Could

In easy wording, ‘can’ means someone or something is able to do or permitted to do something in the present situation and it is used with the 1st form of the verb.

The modal verb ‘could’ is the past participle form of the verb ‘can’ which expresses the past ability of someone or something to do some action in the past.

Uses  and Differences of Can vs. Could

“I can drive a car.” (Present ability)

“I could drive your car if I know you are not well.” (Past ability)

“Can I have your phone?” (Informal way to ask for permission)

“Could I make a call from you phone?” (Polite way to ask for permission)

·         Both modal verbs are used for request but we use can to make a general/informal request whereas we use could to make a request in a more polite way.

“Can you get me a cup of tea, please?” (Informal request)

“Could you wait for a minute, please?” (Formal request)

“Drinking much alcohol can damage your liver.” (Definite possibility)

“He could have passed the test.” (Slight possibility)