How to Use Modal Verbs Would, Could, and Should 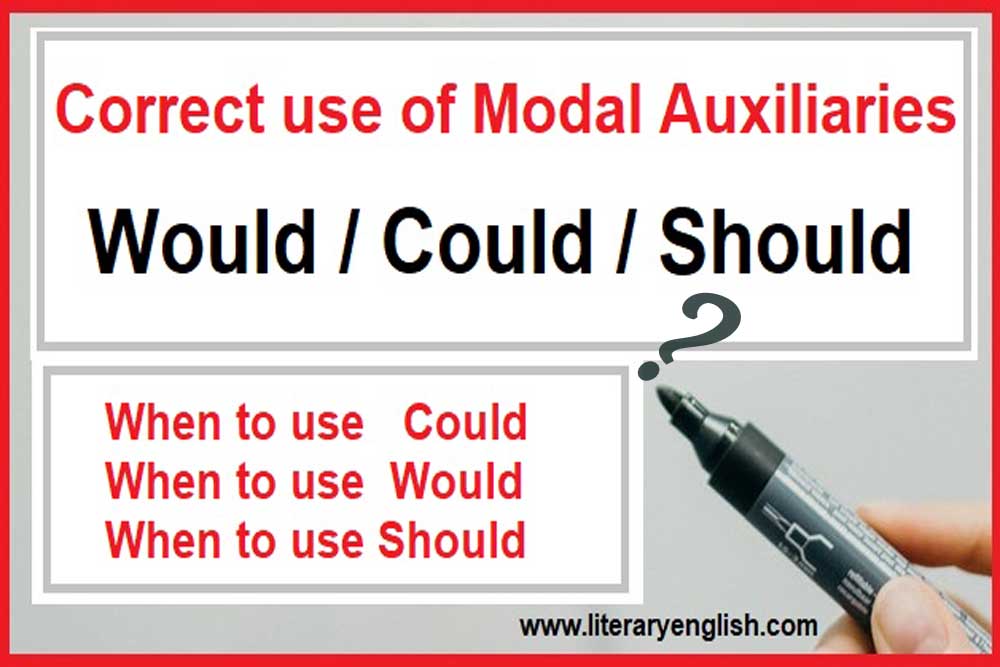 How to Use Would, Could, and Should: Modal Verbs

Here you will learn the use of individual modal verbs would, could, and should and how their function is different from one another.

When to Use Would?

Would is past form of will and it is used as a modal verbs. It has various use according to situation in a sentence. Below are the various use of would.

Would is generally used in situations that can be imaginary or when the possibility of something happening is low.

“Sarah would visit us this month.”

Here would is acting as an auxiliary verb expressing a scenario that might occur.

We use modal verb would to make a polite request as in a sentence below.

We use it also to make a question in a polite tone as in a sentence below.

We use modal verb would for a possibility of an occasion or event that may happen in the past. Look at sentence below to understand it well.

“Lucas would have missed the train if she had not waked up early that day.”

Sometime we use this modal verb to express a habitual past action. Look at example given below.

“John would play cricket whenever his father would leave home.”

Would is also commonly used to show preference between two or more things.

“I am not much hungry so I would like tea rather than meal.”

People use it commonly to express their wishes and desires as in a sentence below.

“We wish that it would work.”

Would is also used to show someone’s intentions or plans. Look at example below.

“He said he would play hockey.”

“The cake would seem to be hot.”

When to Use Could?

Could is past form of can but it acts as an auxiliary verb in some cases. Could is used to express the possibility of an action or event (something that can happen). Look at example to understand it better.

“Sarah could visit us this month.”

Here could is an auxiliary verb that expresses the probability of the situation happening. Here the possibility is “could visit”.  Its mean that Sarah might pay a visit or she was able to visit but she did not visit.

Could is also used to make a polite request or to ask for permission in a polite way. Just look at examples below.

“Could you please pass the book?”

Here in above sentence could is showing a polite request to pass the book. We use it also to make a question. Look at sentence below.

“Could you have mopped the floor?”

“Could I leave now?”

When to Use Should?

Should is a past form of shall and acts as a modal verb/modal auxiliary. There are few uses of word should compared to the word would.

“Should” expresses normally a strong voice, describing something that must be happen. Look at the example below to understand it well.

“Sarah should visit us this month.”

The modal verb should is also used to ask a question but not with politeness like would. It means that asked action was either ought to be done or was ordered. Look at the example below.

“Should you have mopped the floor?”

We use should to express something that is probable as in a sentence below.

“She should be singing a song at concert.”