Manner of Articulation in Phonetics 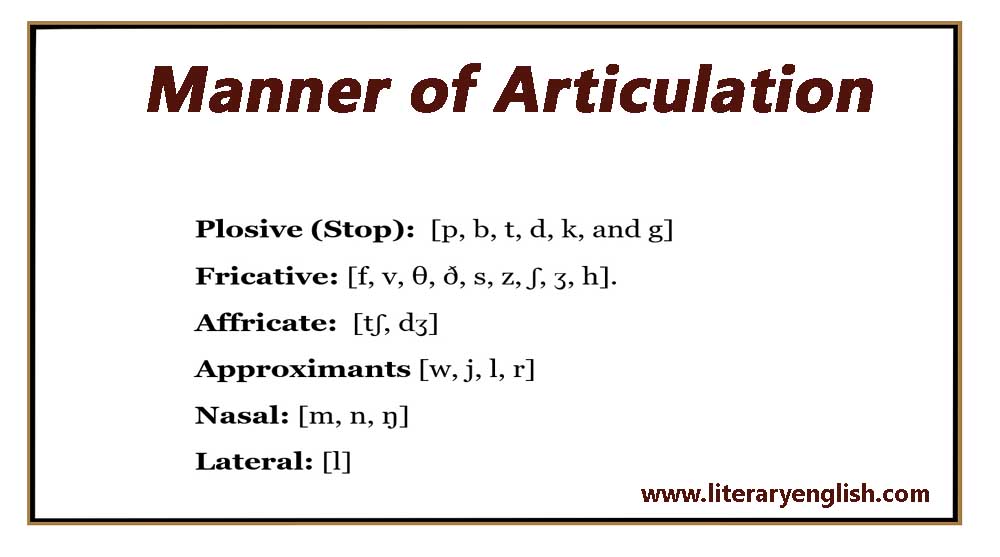 Vowel letters do not make any clear obstructions, but on the other hand, constant letters make clear obstructions. Therefore, we divide manner of articulation into two major types on bases of consonantal sounds.

Stop includes those sounds that are made by full obstruction of air in the vocal tract, and thus traditionally includes the class of plosives. Both, active and passive articulators form a structure of complete closure so that no air can pass through lips (mouth) or nasal cavity (nose). Usually it refers to a sound when a complete closure in the vocal tract is suddenly released; (as in the word [book]). Thus the sound stop occurs in two steps; the obstruction of air and sudden release of that air.

When we push air through a narrow gap to create a hissing noise, we make a fricative consonant. Sometimes, this hissing sound is voiced fricative such as [v, ð, z, ʒ], and sometime it is voiceless such as [f, θ, s, ʃ, h].

(2) Liquids sounds which have comparatively identifiable constriction of the airflow but not like fricative noise such  as  [l]  in  ‘lead’  and  [r] in  ‘read’.

The manner of articulation in affricate is similar to plosive but it does not remain stop for a long time. Unlike plosive, the air is released slowly in affricate.

When air from lungs is obstructed at some point of oral cavity and air passes through nasal cavity, it creates a very different sound. This manner of articulation is known as nasal. The examples of nasals are [m], [n] and [ŋ].

In lateral, there is complete closure of air in the center of the vocal tracts and air flows through the sides of the tongue. The example of lateral sound is [l] as in word ‘late’.

Tap, Trill, and Flap are also known as central approximants. Tap is up and down movement of the top of the tip of tongue. In this sound, tongue makes a single tap against the alveolar ridge. Flap is front and back movement of tongue tip at the underside of tongue with curling behind. In the production of trill the articulator is set in motion by the current of air [r].