Definition and Types of Verb 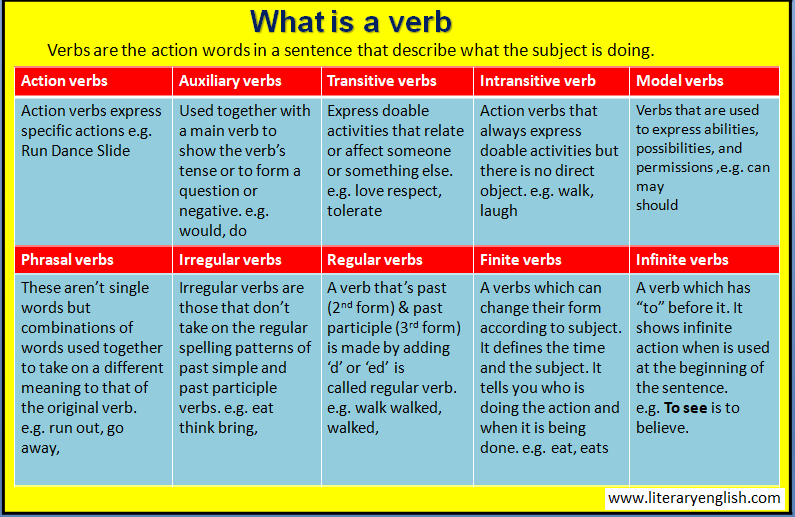 A verb shows the happening or state of something. It is an action word.

Verb is the most important part of any sentence. A sentence does not make sense without a verb in it. There are some instants where a one-word answer can make up for a whole sentence; like, yes or indeed, etc, without the use of verb, but these responses are not used in formal writing.

Verbs can also consist of more than one word, such as:

The children were playing in the backyard.

Definition of Verb in Dictionary

Definition of verb varies according to different dictionaries.

Click here for definition of verb in Merriam Webster dictionary.

Click here for definition of verb in Oxford learner’s dictionary.

Linking verb is a verb that connects a sentence together. It does not mean anything on its own but makes sense when used in a sentence. Common Linking Verbs that are used are:

The birds are flying high up in the sky.

She is always looking fabulous.

In the above examples, we can see that the linking verbs are connecting the subject with the rest of the sentence. Without Linking Verbs, the sentences do not have a complete structure.

Action verbs show action. They create an image of the happening in your head. There are two kinds of action verbs: Transitive and Intransitive.

The verb in a sentence that has a direct object is known as Transitive verb. The verb should have something on which it is performed. The sentences containing Transitive Verbs can also be converted from Active Voice to Passive Voice.

Look at the examples below:

The batsman hit the ball hard.

She walked the streets alone.

In the first example, we can see that the verb hit has a direct object ball. The sentence can also be converted into passive voice: the batsman hit the ball.

The same case is with the second sentence. The verb walked has direct object streets and the sentence can be converted into passive voice: The streets were walked by her, alone.

The verb in a sentence that does not have a direct object is known as Intransitive verb. The sentences containing Intransitive Verbs cannot be converted from Active Voice to Passive Voice. Let us see the examples below:

The house is flawed.

In both of the above examples, there is no direct object. Both cannot be converted into passive voice too. So, the verbs; sleeps and flawed are intransitive.

The child rings the bell.

Here the verb ‘rings’ has a direct object and is used transitively.

Here the verb ‘rings’ does not have a direct object and is used intransitively.

I stopped the car. (Transitively)

There are some verbs such as: go, sleep, die, fall, etc, which show an action that cannot be done to anything or anyone. Hence, these verbs can never be used Transitively.

Reflexive verbs are those whose subject and direct object are the same. They refer back to the same thing or person. Let us see the examples below.

She stays home herself.

The cat cleans itself.

In both the above examples, the verbs are referring back to the same person. Their subject and object are the same, hence they are Reflexive Verbs. The reference back is done in form of Reflexive Pronouns by which they are being called reflexive verbs.

Auxiliary Verbs help the main verb in a sentence and are called Helping Verbs. Auxiliary Verbs, when used with ordinary verbs help in changing the tenses, mood or voice of a sentence. They also help in making negatives and interrogatives of sentences. Auxiliary Verbs are also simply called Auxiliaries. Common words that come under this category are as follows:

I was going to the shop.

Here the Auxiliary is used to form a continuous tense.

The car door was opened.

Here it is used in formation of a sentence in passive voice.

To form questions, to emphasize on something, or to make a request, the Auxiliary Do is used.

Do you know where the parking lot is?

You do look great.

Modal verbs are the verbs that are used before the ordinary verbs to show meanings such as: possibilities, permission, certainty etc. They can just simply be called Modals. Common Modal Verbs that are used are as follows:

Can, could, may, might, will, would, shall, should, must, ought.

Never and dare are also used as modal verbs sometimes.

You dare not do such a thing.

You must be Sara’s sister.

You could have stopped them.

Modals are mostly put in the category of Auxiliaries. Then they are sometimes called Modal Auxiliaries.

About Authoress: The article “Definition and Types of Verb” was written by Sayeda Javaria. (javaria.hanan@gmail.com).