Definition and Types of Conjunction 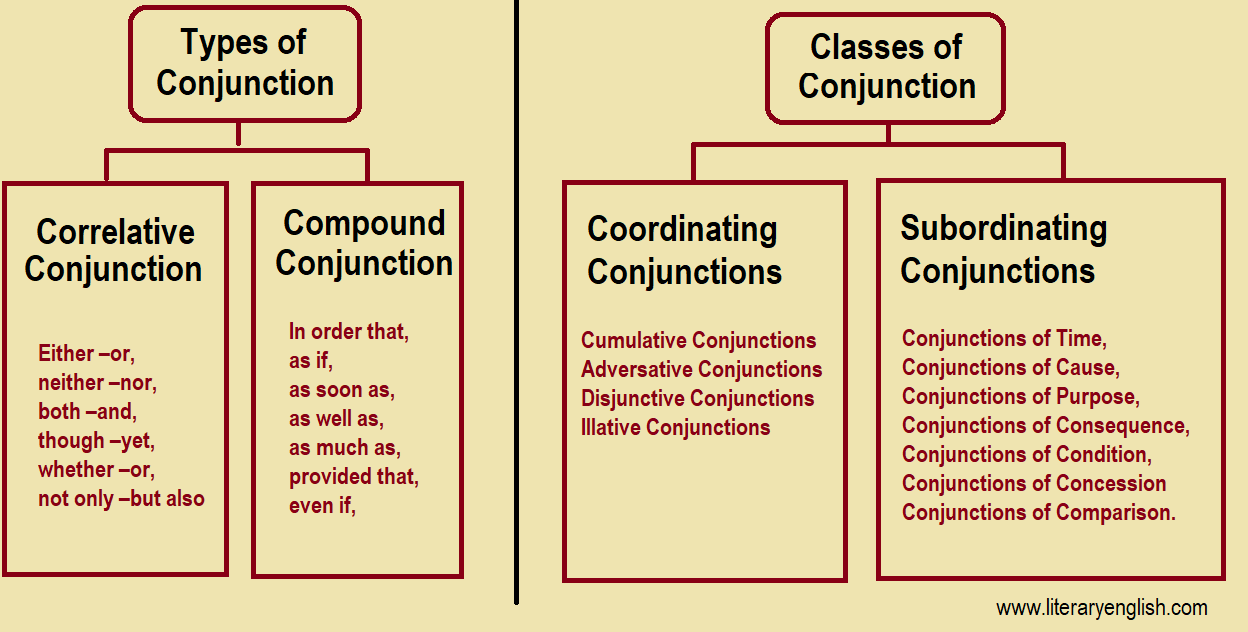 The word conjunction means union, concurrence or coexistence. Let us look at the definition of conjunction. Conjunctions are simply words that join sentences, clauses and sometimes words. These join together sentences are to make them more compact. Unlike relative adverbs and relative pronouns, conjunctions just simply join and perform no other job. Look at the examples below to get a clear understanding.

In the first example, the conjunction ‘but’ is joining two sentences and is also making them smaller. So instead of saying ‘but she is talented’ we have shortened the sentence and made it compact.

In the second example, the conjunction and is only joining two words.

Definition of Conjunction in Dictionary

Either –or, neither –nor, both –and, though –yet, whether –or, not only –but also

Examples of correlative conjunctions in sentences:

Either do this or do that.

Though it was raining heavily, yet she still managed to come.

Take note that correlative conjunctions should be placed right before the words to be joined. We cannot write: She not only speaks English, but also Arabic.

The correct way is: She speaks not only English, but also Arabic.

In order that, as if, as soon as, as well as, inasmuch as, provided that, even if, etc.

Examples of Compound Conjunctions in sentences:

The house looks as if it was made hundreds of years ago.

You can have the sweets provided that you brush your teeth afterwards.

I accept your invitation, inasmuch as spending time with you is great.

Examples of Coordinating Conjunctions in sentences:

I went to work but my sister stayed at home.

The cat got up and ran very fast.

He plays guitar as well as he paints pictures.

2. Adversative Conjunctions: These conjunctions are used to indicate opposition or contrast between two statements or clauses.

He is ill, but he is getting better.

She was all right; only she had a headache.

You must quit smoking, or you will get seriously ill.

Revise your lesson; else you will fail the test.

4. Illative Conjunctions: Illative conjunctions denote inferences. They make an assumption in one statement based on the condition in the other statement.

Someone is at the door, for the bell rang.

I have been applying for Colleges everywhere, so I will definitely get in one.

After, before, because, if, till, as, that, though, although, unless, etc

After the rain was over the sun came out again.

I will wait here till you come back.

These conjunctions are used to indicate time of happening of something.

I went home after the sunset.

Hani reached the ceremony before it was over.

She baked a cake because it was her birthday.

Since you have been gone, I am doing the dishes.

He ate, so that he won’t be hungry.

I went to the doctor lest my wound should be infected.

She worked so many hours that she could barely sit.

The seminar was boring so people started yawning.

She will work if she gets paid handsomely.

People will not succeed unless they work efficiently.

6. Subordinating Conjunctions of Concession: These conjunctions concede or state a fact or idea regardless of what claim is made in the main clause. Look at the following examples to get clear on this one.

Though my cat is ill, yet it plays all day.

Even though he was rich, he never looked down upon anyone.

We can see that in example one, regardless of illness of the cat, it still plays. So in spite of whatever is said in the clause, a fact is still presented by using a conjunction of concession.

She is stronger than her friend.

Our team wore white whereas their team

About Authoress: The article “Definition and Types of Conjunction” was written by Sayeda Javaria. You can reach her at javaria.hanan@gmail.com or view her profile at Sayeda Javaria Hanan .