Definition and Types of Pronoun 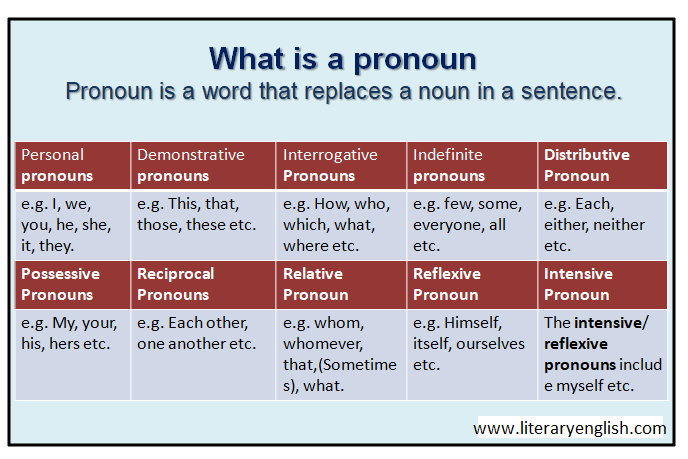 (Jam is a boy of sixteen. Jam is studying in 9th class. Jam has two brothers. Jam loves playing football. Jam is captain of his team.)

Look at above paragraph. The name Jam looks strange in every sentence due to repetition of noun Jam. We replace it with pronoun to make a sentence beautiful and easy to avoid word redundancy. We will replace it with appropriate pronoun and read it again.

Jam is a boy of sixteen. He is studying in 9th class and has two brothers. He loves playing football and he is captain of his team.

Definition of Pronoun in Major Dictionaries

Merriam Webster dictionary defines pronoun as: “any of small set of words in a language that are used for noun or noun phrase and whose referent are named or understood in context.”

Oxford Learner’s Dictionary defines pronoun as: “a word that is used instead of a noun or noun phrase, for example, he, it, her, me, them, etc.”

1. Subjective Pronoun: Subjective pronouns replace the subject in a sentence.

Common subjective pronouns are I, we, you, he, she, it, and they

Common objective pronouns are me, us, you, him, her, it, and them

Examples: She gave him a present on his birthday. 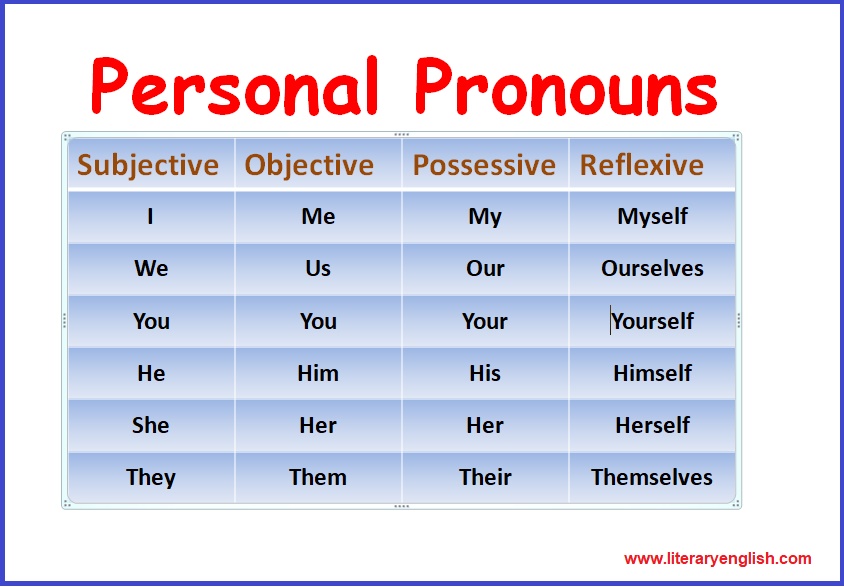 The weak possessive pronouns include your, my, her, his, its, their, our, and, your. Their function is as a determiner in front of a noun to express whom something belongs to: “I said that’s my pen.” Sometime we call them possessive adjectives.

1. Singular Indefinite Pronoun: We use singular indefinite pronouns for the singular objects and not for plural.

Singular indefinite pronouns include: someone, somebody, something, no one, nobody, nothing, everyone, everybody, everything, anybody, another, anyone, each, anything, either, other, one, neither, and much

2. Plural Indefinite Pronoun: Plural indefinite pronouns are used for the plural objects and not for singular.

Plural indefinite pronouns include many, several, few, others, and both.

Whom, whoever, whomever, who, that, which and whose

She does not know which pack of pencil you want.

“Which pack of pencil you want” is a relative clause, and the relative pronoun “which” has linked it to the main clause.

Intensive pronouns are himself, myself, themselves, itself, herself, yourselves, ourselves, and yourself,

Jerry herself is her worst critic.

Do not eat that.

An interrogative pronoun often stands for something that we are not aware of yet, because we are asking about it. We use these pronouns specifically to ask questions. These pronouns are special because they all start with “Wh”, which is quite easy to remember.

Most commonly used interrogative pronouns are whose, what, whom, which, and who.

The other words like “whichever” and “whatsoever” are the words that we use as interrogative pronouns.

What is your nickname?

Whose pen is this?

Whatsoever do you suggest by that?

Whom were you talking with last night?

Sentence in which ‘wh’ words are not interrogative pronoun:

When do you have to go to gymnasium?

He doesn’t know where Ali was living last week.

Reflexive pronouns are: yourself, himself, ourselves, itself, themselves, herself, myself, yourselves.

She told herself to spend all vacations at home.

He bought himself a new phone.

What is the difference between intensive pronouns and reflexive pronouns?

Jane and Lizzy are laughing at each other.

Each other and One another are the two reciprocal pronouns are not individual words but they are phrases. While using them, there must be two or more things, persons, or groups involved. Moreover, they all must be acting the same action.

Some more examples are:

Paul and Jam help each other.

Both teams fought hard against each other.

Why do you laugh at each other?

All the students gave presents to one another.

Distributive pronoun is a pronoun that describes a member of a group separately from the group and not collectively or including in that group. It refers to a thing or a person in a group. We use this pronoun to describe all the individual members of a particular group. Distributive pronoun are commonly used with plural noun and singular verb

Distributive pronouns that are commonly used are each, either, every, neither, none, everyone, and any.

Each of the boys writes a poem

Neither of the pens is black.

About Authoress: The article “Definition and Types of Pronoun” was written by Sayeda Javaria. You can reach her at javaria.hanan@gmail.com or view her profile at Sayeda Javaria Hanan .