Definition of Adjective in Dictionary

Let us discuss each type of adjective in more detail.

Adjectives of quality describe the kind, quality, or degree, of a noun or pronoun. They are also called Descriptive Adjectives.

He ate a big mango.

Hassan is an honest man.

The child is foolish.

Arabic language is not hard to learn.

In the last example, the word Arabic is a proper noun. Such adjectives which are formed from proper nouns are called sometimes as Proper Adjectives. They generally come under the category of adjectives of quality.

These adjectives tell us about the quantity of a noun. They answer the question: How much?

Common adjectives of quantity are: some, much, no, any, little, enough, great, half, sufficient

The pay is enough for my expenses.

Half of the papers were checked.

Adjectives of Number tell us about how many things or people are meant or the order of standing of people or things. These are also called Numeral Adjectives.

(a) Cardinals indicate how many. Such as: One, two, three, etc.

Example: I have three pairs of scissors.

(b) Ordinals indicate in which order. Such as: First, second, third, etc.

Example: She was the first one to arrive at the airport.

All the cats are sleeping.

There are no pedestrians on the street.

Every, each, either, neither

Each student must take its turn.

Neither proposal is acceptable.

Demonstrative Adjectives point to a specific person or thing. They answer the question: Which? Some common demonstrative adjectives are:

This, that, these, those, such

This is my assignment.

Those are spicy dishes.

Such an attitude will cause him failure.

Which way goes to the mall?

What time is it?

Whose duty time is it?

My daily routine is pretty simple.

Your shoelaces are loose.

Cat is licking its paws.

They are doing their work.

Emphasizing adjectives are used to put emphasis in sentences. Look at the example below.

This is the very book I want.

Sarah saw the robbery with her own eyes.

In the examples above, very and own are added to put additional emphasis.

Examples of adjective in sentences:

What a spectacular view! 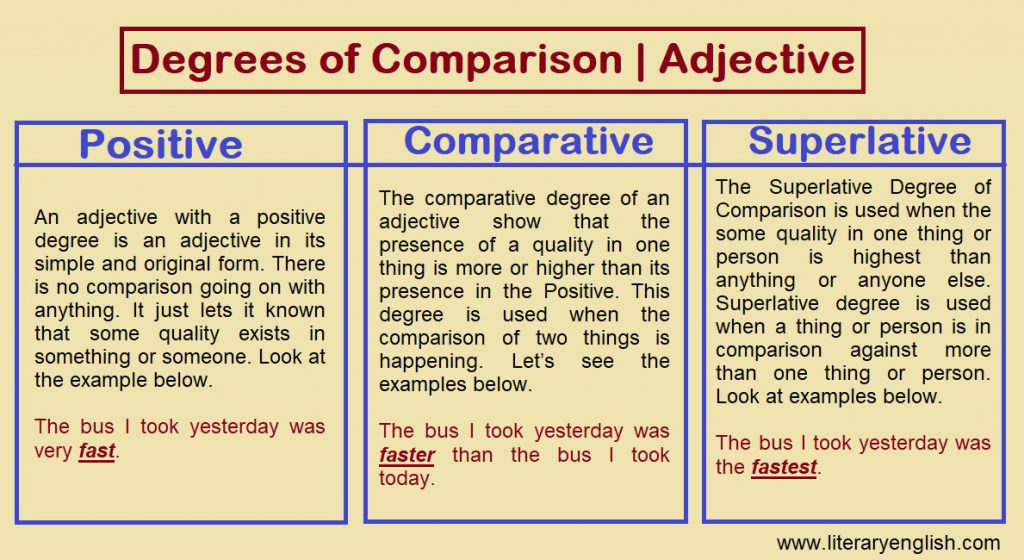 Like above types of adjectives; Adjectives are also categorized into three degrees of comparison.  changed in form very often to denote comparison. The degree to which an adjective changes, determines its degree. These degrees are called Degrees of Comparison.

There are three degrees of adjective: Positive Degree, Comparative Degree and Superlative Degree.

An adjective with a positive degree is an adjective in its simple and original form. There is no comparison going on with anything. It just lets it known that some quality exists in something or someone. Look at the following examples.

The bus I took yesterday was very fast.

My dog is very intelligent.

This is a good working calculator.

In all of the above sentences, the presence of a quality is shown without comparison to anything else; this makes these words have Positive Degree.

The comparative degree of an adjective show that the presence of a quality in one thing is more or higher than its presence in the Positive. This degree is used when the comparison of two things is happening. Let’s see the examples below.

My dog is more intelligent than my friend’s dog.

This is a better working calculator.

In all of the above examples, we are talking about the quality of one thing in comparison to the other. This comparison makes this degree the Comparative Degree.

The bus I took yesterday was the fastest.

My dog is the most intelligent dog.

This is the best working calculator.

In all of the above examples, we have compared the thing we were talking about with all the other things of the like. This is the highest form of comparison and hence is the Superlative Degree.

About Authoress: The article “Definition and Types of Adjective” was written by Sayeda Javaria. You can reach her at javaria.hanan@gmail.com or view her profile at Sayeda Javaria Hanan .