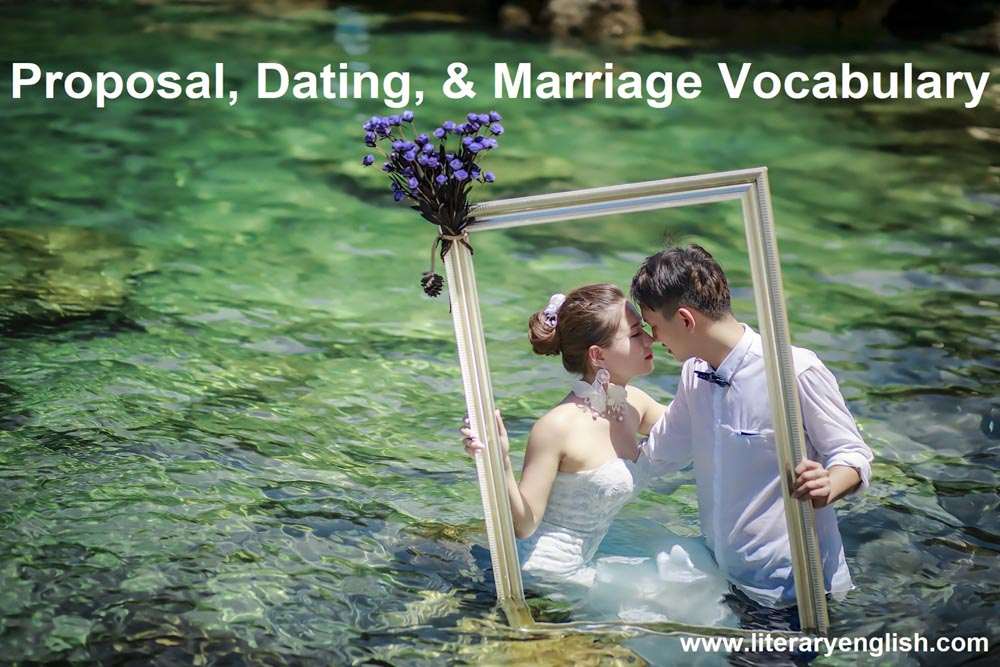 What is in proposal, dating, and  marriage vocabulary article? Well! Here you will find what you are searching to win your beloved. A suitable way to propose your beloved for date or marriage in such a pretty way that partner will never refuse you. Go through proposal, dating, and vocabulary article and memorize the words and phrases to use them on suitable occasions.

A wedding day is a day of marriage often includes a ceremony and a celebration of getting married.

Example: Asian people make many dishes on wedding party for their guests.

A bride is the name for a woman used on her wedding day. Before wedding, she in known as a fiancée or a girlfriend but after her marriage, she is a wife.

A groom is the name for a man used on his wedding day. Before wedding, he in known as a fiance or a boyfriend but after his marriage he is a husband.

Example: Everyone wants to shake hand with groom on his marriage ceremony

A spouse is a common word for a husband or a wife. This word is used for a married couple. Husband or wife both can use this word for their partners.

The word ‘propose’ is used for a marriage proposal. If a boy asks or requests a girl to marry him its mean he proposed her. To ask someone to marry you, to ask for someone’s hand in marriage or to ask someone to be your spouse are the way to propose someone.

Example: I’m going to propose to Jane this month. John arranged a candle dinner and asked Austin’s hand in marriage.

Betrothal is a literary term identical with engagement. This word is not very common in modern English.

Example: The couples’ betrothal was approved by the court.

To pop the question

This phrase is commonly used in informal context to ask someone to marry you.

Example: When are you going to pop the question?

This short phrase is used to get married with someone.

Example: They are going to marry this Sunday.

This phrase is same as ‘to marry’ means to get married with someone.

Example: We wed five years ago here in Islamabad.

Matrimony is the state of being married.

Example: The matrimony withheld the test of time.

Wedlock is a state of being married. When someone is married he/she is in a wedlock.

Example: They have been in wedlock since 2017.

Vow is the promise made between couple during wedding ceremony.

Example: Europeans exchange their vows in front of their family and friends.

When a boy or a girl has agreed to marry someone it means he/she is “engaged,”

Example: Joseph is engaged to Jane.

Fiance is commonly used word for an engaged boy. This word is used in possessive case as my fiance.

Example: Her fiance loves her very much and wants to marry her on 14 February.

Fiancee is commonly used word for an engaged girl. This word is used in possessive case as my fiancee.

Example: His fiancee loves him very much and wants to marry him on 14 February.

The term honeymoon is used when a recently married couple plans a visit to spend some vacation together on any visiting place just after their marriage.

Example: We went to Ulm to enjoy our honeymoon.

Anniversary is the date on which the couple got married. Many couples celebrate this occasion every year by going out to visiting, dinner or exchanging flowers or gifts.

Example: Our wedding anniversary is 11th of September.

When a married couple or engaged couple decide to end their marital relation they use the breakup of their relation.  .

Example: The only reason for the breakup of Jerry and Jane was he differences in their ages.

The word “divorce” means that a married couple legally and formally ends their marriage and decide to live separately.

Example: Helen divorced his wife after she became an alcoholic.

Example: My ex-girlfriend is living in Germany with parents.

Example:  I did not really enjoy the trip. Everyone was with their spouse and I was the only unmarried person in the trip.

It means that the person is already engaged or in a relationship with someone else.

Example: Jenny looks very pretty and I wish to marry her, but she is already taken.