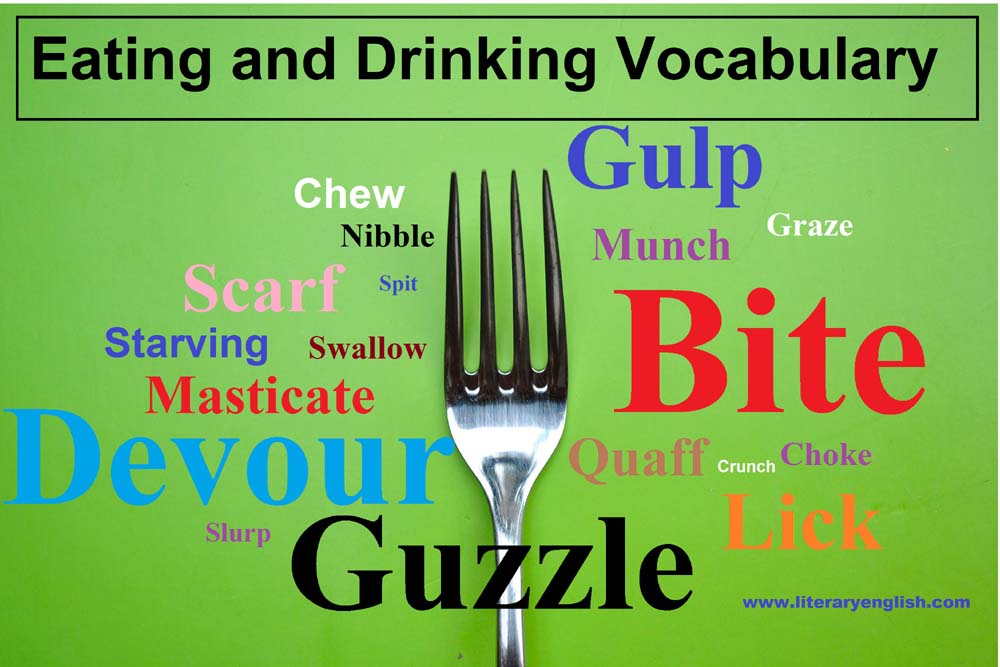 Example: She nibbled some cheese and crackers before lunch

Meaning: You will find this word in eating and drinking vocabulary very common that expresses to eat small portion of the food throughout the whole day.

Example: Jam was grazing on chips all noon

Meaning: To hold and cut some piece of food with teeth directly to eat. You can use this word for such food items that can be hold in hand and keep enough size to put in mouth to cut it with front teeth like pizza, sandwich, cookie, cake, etc.

Example: She gulped the pizza in few bites

Meaning: To chew something in a noisy way

Example: She is munching snacks.

Meaning: To eat something in a hungry way

Example: She scarfed down my pizza when I was in washroom.

Example: She devoured three sandwiches in a while.

Meaning: Too much hungry

Example: Many NGOs are working to feed starving children in poor regions.

Meaning: To eat and swallow some food very quickly and in a large quantity. This word is commonly used in eating and drinking vocabulary.

Example: Zaki told him not to gulp his sandwich.

Meaning: To take food into stomach through mouth

Example: Always chew your food well before swallowing it.

Meaning: To drink a large amount of (liquid food such as bear, juice) quickly

Example: She quaffed three pint of ale at pub.

Meaning: To cut food into pieces using teeth before swallowing it

Meaning: to take some food or liquid into mouth with the help of tongue, to touch a tongue on something to get its taste

Example: She licked her fingers after taking meal with hands.

Meaning: to drink some liquid such as bear or ale very quickly and in a large amount, to drink greedily

Example: She guzzled three glass of soda after lunch.

Meaning: to become unable to breath freely when something like food gets stuck in throat that cause stoppage in breathing

Example: Guzzling a glass of liquor continually can cause choking.

Meaning: The liquid or food that comes out from stomach through mouth due to sickness or some other reason.

Meaning: To chew something in a noisy way, to chew food that causes noise

Meaning: to chew food to make it more soften

Example: The goats were masticating their food.

Meaning: loud sound of something being crushed under teeth, to chew food with crushing noise

Example: She crunched a packet of crispy chips.

Meaning: to drink or eat some food with a sucking sound, a sucking noise while eating or drinking like a sip of tea

Example: Usually many people slurp tea from a cup.

Meaning: To throw or eject food or something from the mouth, to throw saliva out from mouth as an expression of contempt

Example: She spited the morsel when she observed crunching sound of something from it.

Example: She always remains in search of party to pig out some special meal.

Meaning: (a slang) an unhealthy and casual meal, expression for disapproval for meal

Example: I asked you to prepare lunch not a dog’s breakfast.

Meaning: to eat very little, to eat a small portion of food

Example: She eats like a bird in school parties.

Meaning: to eat a lot

Example: He ate like a horse on my wedding party.