Symbolism in A Tale of Two Cities by Charles Dickens

Symbolism in A Tale of Two Cities 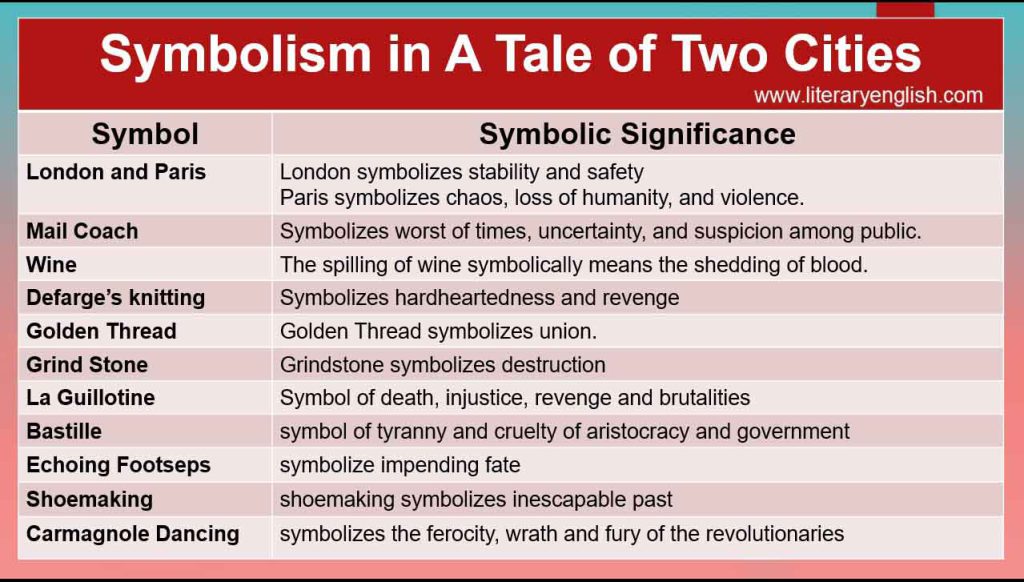 What is Symbolism in Literature?

Symbolism, in literature, generally implies the use of an idea, an object, a person, an animal or an event in a broader sense than its literal meaning. Symbolism is an integral part of literature that is widely used in poetry and fiction. It adds an aesthetic beauty to a literary piece of writing.

A symbol can represent a concept or theme that the author wants to stand out for the reader. A single word can represent a symbol, sometime a long sentence, a paragraph, or even a whole piece of writing can be a symbol. At start of a story, a symbol might look small and irrelevant, but later readers realize that the symbol is there to represent something important to grab the main them of the story.

Symbolism in A Tale of Two Cities

Symbolism in A Tale of Two Cities has a vital importance in its structure of the story and relates it to history and French Revolution. Charles Dickens uses symbolism in A Tale of Two Cities as an integral part of the plot. Charles Dickens artistically packed his novel with the frequent use of significant symbols. His symbols represent human conflict and desperation, as well as the decency throughout the novel. Dickens’ images and motifs are so strong that they could almost be said to serve as characters in the novel themselves. A plenty of images and characters in the novel has a symbolic significance.

Main Symbols in the Novel A Tale of Two Cities

Opening lines of the novel focuses on two cities. “It was the best of times and it was the worst of times” designates these two cities: London and Paris. Because, A Tale of Two Cities was a historic novel and story revolves around two cities London and Paris, so both these cities symbolize their countries England and France respectively.

London has its own insecurities though it symbolizes stability and safety. England was a safe place for the Manette family and Charles Darnay. In historical perspectives, England was a politically stable country. In contrast, Paris symbolizes chaos, loss of humanity, and violence. Paris also symbolizes callousness from both the aristocracy as well as the revolutionaries. Uncertainty, frustration and despair of hunger turned the entire society into bloodshed where decent people become callous murderers in the name of liberty and revolution.

The journey of the mail-couch at opening of the novel is highly symbolic. It symbolizes worst of times, a place of uncertainty, and suspicion among public. The tough journey symbolizes hardness and difficulties. As Dickens Says: “The Dover mail was in its usual genial position that the guard suspected the passengers, the passengers suspected one another and the guard.”

Wine and Blood | A Symbol of Bloodshed

One of the major symbols in the novels is ‘Wine and Blood’. In front of Madame Defarge’s wine shop, a cask of wine gets broken in the street and red-colored wine is spilled on the ground. This red wine paints the streets of Saint Antoine symbolizing the bloodshed. Many people rush towards it to drink mouthfuls of wine. The wine stains many faces like blood on their faces. The spilling of wine symbolically means the shedding of blood. This symbol becomes perfectly explicit when a drunken man dips his fingers in the wine and writes word “blood” on the wall. Blood becomes the main symbol of the French Revolution, the leaders of which forgot the ideals of Liberty, Equality and Fraternity and plunge Paris into a blood bath. The same symbol is repeated when the whole  atmosphere   looks  as  red  as  blood  when  the  magnificent   Chateau  of  the Evrémonde  is  set  ablaze.  The indiscriminate massacre and   the non-stop use of the la-guillotine have shed so much human blood.

Knitting of Madame Defarge’s is one of the strongest symbols in the novel. She stitches the name of all those aristocrats and nobles who will need to die after revolution. The stitching itself represents how hardhearted and revengeful the revolutionaries could be. The knitting register is indecipherable to anyone except Madame Defarge, and seems to be a source of personal solace to her as well as her duty to a major cause. As Madame Defarge sits quietly knitting, she appears harmless and scenic. In fact, she sentences her victims to death through her knitting. Similarly, the poor peasants may appear meek and humble figures, but they turned into exterminators for their autocrats.

Golden Thread | A Symbol of Union

Lucie is symbolized as “The Golden Thread” who connects all of the people and families in the story. She has got yellow hair and known as “golden-haired doll” who pleases whom she meets. She is a kind and loving person who would never do any harm to anyone. Golden Thread symbolizes union. Lucie unites Dr. Manette to Darnay, Carton to Darnay, and Mr. Lorry to the family in general. Lucie becomes the reason that Charles escapes the grasp of the Republic’s “justice.”

Grindstone and The Mill

The Grindstone and The Mill perform more or less similar functions. Literally, a mill of course, grinds wheat. Both crush wheat into flour, which serves as food for the human beings. However, here in the novel, both have symbolic significance. Mill has been symbolized for depicting child labor and struggle for sustenance as Dickens mentions Mill as grinding the young people into old. Grindstone symbolizes destruction in the novel where revolutionaries are described as sharpening their bloody hatchels, bayonets, knives, and swords at a grindstone. The grindstone symbolizes fear and of strength for the characters in the novel.

La Guillotine | A Horrific Symbol in A Tale of Two Cities

The La Guillotine ‘the National Razor’, is most horrific symbol of the novel like blood. The La Guillotine is a machine in which a heavy blade is mounted within two vertical poles specially designed to behead its victims (All the people belonging to aristocracy and the nobility whether good or bad) and those who stand against “La Republic”. The guillotine is the ultimate symbol of death, injustice, revenge and brutalities and the barbarities which are committed by the poor and the down trodden against aristocrats when they come into power. It is a quick way to die, but it is also disgusting and very public, quickly reducing the formerly mighty and arrogant to decapitated corpses, which delights the bloodthirsty crowds. However, it is also the last stop in a corrupt system that lumps the innocent in with the guilty, offering no due process. All the people belonging to aristocracy and the nobility whether good or bad are mercilessly beheaded by the La Guillotine. Thus, La Guillotine is an ugly and hateful symbol like the Bastille. La Guillotine is a horrible and hateful symbol as the Bastille previously was.

Bastille | A Symbol of Tyranny

The Bastille was the symbol of tyranny and cruelty of aristocracy and government of the King Louis XVI. It symbolizes the brutality of aristocrats on the poor people. Many prisoners have been suffering from decades for no crime. When the inhabitants of Saint Antoine, capture Bastille under the leadership of Monsieur and Madame Defarge, their jubilation turns the upside down. The governor of the Bastille was seized and Madame Defarge herself cut off his head with her knife.

The carmagnole dancing has also symbolic significance in the novel. Carmagnole is a horrible sight that seems very violent and vicious. In carmagnole dancing, the dancers gnash their teeth in unison that symbolizes the ferocity, wrath and fury of the revolutionaries.

The chateau building of Marquis Evermonde has its own symbolic significance.  As Dickens describes: “It is a heavy stone building with a large stone courtyard before it, and a stone staircase, with heavy stone, balustrades, and stone urns, and stone flowers and stone faces of men and stone heads of lions, in all directions; as if the Gorgon’s head”. Heavy stone faces outside the walls of the building symbolize the hard heartedness of aristocracy.

Footstep in A Tale of Two Cities

Readers come across footstep in Chapter 2 when Jerry Cruncher approaches the mail coach, and the sound of his horse’s approach terrify the people in the mail coach. The echoes of approaching footsteps represent threat that prevails until end of the novel. Footsteps always signify something approaching near, something dangerous and annoying. At London, Lucie hears the echoes of all the footsteps coming into their lives that symbolize impending fate. The streets are barren but footsteps are heard even the sound of raindrops are perceived as footsteps. Echoing footstep indicates the coming of the great tempestuous revolution when revolutionaries will come around Lucie and will get her involved in connection with aristocracy.

The Symbolic Significance of Shoemaking

Dr. Manette shoemaking symbolizes inescapable past. The Marquis imprisoned him for 18 years in Bastille. During detention, and makes shoes in his madness and found solace in his shoemaking when the isolation and boredom became enough to drive him mad. He continues shoemaking even after release from Bastille. Her daughter takes his care and tries to get him back to his senses, but relapses in response to traumatic memories of tyranny, as when he learns Charles’s real name is Evrémonde.