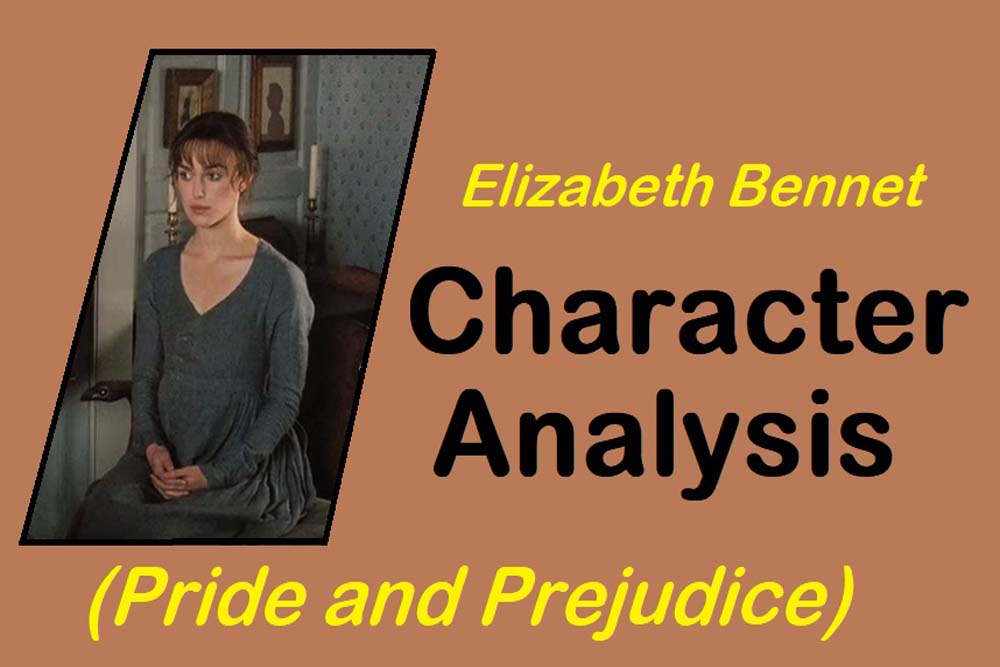 Elizabeth Bennet, sometimes Lizzie, sometimes Eliza, is one of the six Bennet sisters and she is the heroine of Pride and Prejudice. She is one of the most distinguished feminine characters in English fiction. She is the second daughter in the Bennet family and a central character in Pride and Prejudice. She is main focus of the readers from very beginning of the novel till ending. She is the main character in the novel; through her, all the characters are well knitted with one another by some relations in the plot of story.

Elizabeth Bennet is an attractive young girl in her twenties with full of blossom and charm on her face. Her eyes are captivating and she holds an exceptional personality. Her expressive eyes make Mr. Darcy spellbound and cause to break his crux of pride. Both of the elder sisters are described beautiful, tall and handsome. Her actions and smiles on her face make her so attractive. Most of the time she talks in a smiling face and also passes smile frequently on others comments. Her comments are mostly ironic that cause to make her smile.

Her admirable traits are several—she is lovely, intelligent, clever, confident, and decisive. She is also embodiment of honesty, virtue, and lively wit. Here are some salient traits of Lizzy.

Good Sense: Elizabeth Bennet is not only a beautiful and an attractive but she also possesses spirited wit and good sense. She is most intelligent and quick-witted character in the novel. Because of her good sense, she is most favorite daughter of her father Mr. Bennet. Her wit is evident in her conversations made to tyrant characters like Lady Catherine. Her good sense, her spirited wit, her intelligent remarks, and her philosophy on traditional norms adhered to females reveals a true picture of Jane Austin in Pride and Prejudice.

Confidence: Lizzy is full of confidence of in all her conversations. She is not from elite class like Mr. Darcy or Lady Catherine but when she talks to them, she never underestimates herself. She never supposed herself a member of middle class society and her opinions and remarks do not have value. But her confidence and good sense makes her opinions considerable for rich class like Darcy’s family. On the other hand, her confidence in her judgments leads her to prejudice.

“My courage always rises with every attempt to intimidate me.” (Elizabeth Bennet)

Conversational Skills: Conversational skills of Elizabeth Bennet are remarkable. Her conversations carry deep meaning and she stand with what she says. She is fully capable for making decisive action as when once she denies to the proposal of Mr. Collins, she keep her decision until Collins marries Charlotte. She is well familiar with the talking manners and surprises Lady Catherine by her conversational skills. She makes rich opinions and replies so confidently. Her sentences are mostly ironic that carry deep and clear facts.

“One cannot be always laughing at a man without now and then stumbling on something witty.” (Elizabeth Bennet)

Emotional Being: She is also an emotional character in the novel and feels great affection for her sisters particularly for her elder sister Jane and is also concerned for Lydia and Kitty.  She is very close to her father who also respects her opinions as in matter on Collins’ proposal. Her mother does not like her unlike her father because of rejecting Collins though she is often exasperated by her mother’s behavior.  Her relations with her friends are also very cool.

Being an embodiment of many good traits, Elizabeth possesses some weaknesses in her characters. She is Judgmental, stubborn, outspoken, funny, impulsive, and vain. She is self-assured and assertive, but never rude or aggressive towards others.  Her main weakness lies in making quick judgments towards others.  She fails to judge Mr. Wickham and believes on her blindly. She also cannot judge Darcy’s change but Lydia tells her that Darcy paid for their wedding that startles her and forces her to think about change in Darcy.

“You are mistaken, Mr. Darcy, if you suppose that the mode of your declaration affected me in any other way, than as it spared me the concern which I might have felt in refusing you, had you behaved in a more gentlemanlike manner.” (Elizabeth Bennet)

She is quick in judging herself and others, but often these judgments are merely based on appearance rather than hidden reality, normally based on her strong emotions rather than rational thought.

The main targets for Elizabeth’s prejudice are Wickham and Darcy. At beginning she disliked Darcy for the harsh comments made by him to dance with her “she is handsome but not pretty enough to tempt me”. But later on Elizabeth was misguided by Wickham and she believed on him blindly and could not judge his hidden personality. When Darcy proposed her, she rejects him and admonishes him with language that no-one has ever used to him. She called him: “arrogance,” conceit,” “selfish disdain of the feelings of others.”

Afterwards, however, she delights in provoking Darcy, and when Wickham make her mad against Darcy by his fabricated stories to win her sympathies, she is more than ready to believe the accusations made about him.  At one moment, Elizabeth states firmly that she does not think Darcy capable of such inhumanity. From the start, she misjudged Wickham by his looks and charm but could not dive deep into his nature.  For the next twenty chapters, she takes Wickham’s side regardless of warnings from her elder sister Jane and others, all of whom, ironically, she considers to be prejudiced.

Here is what Jane Austin wants to reveal through character of Elizabeth. Elizabeth’s views on love and marriage are not conventional.  Elizabeth Bennet dares to challenge the expected gender norms of 18th century England, mostly when compared with the other females in the novel. She expresses her opinions openly and without fear and has the ability to challenge the views of those of superior social standing.  She does not like those marriages based upon conventional norm and considering husband as a matter of social and economic survival only. Despite of forcing by her mother, she rejects two proposals holding good economic fortune. In doing so, Elizabeth rejects traditional norms where females are obliged to marry for financial opportunity.

She plainly rejected marriage on the basis of economic security and what she wants is happiness in marriage and it could only happen when someone marries for love not for other interests.

Throughout the whole novel, Elizabeth Bennet faced many challenges regarding female gender and social rank and she never give up but she stood with the reality. By Elizabeth Bennet, Jane Austen has created the first feminist in English literature.