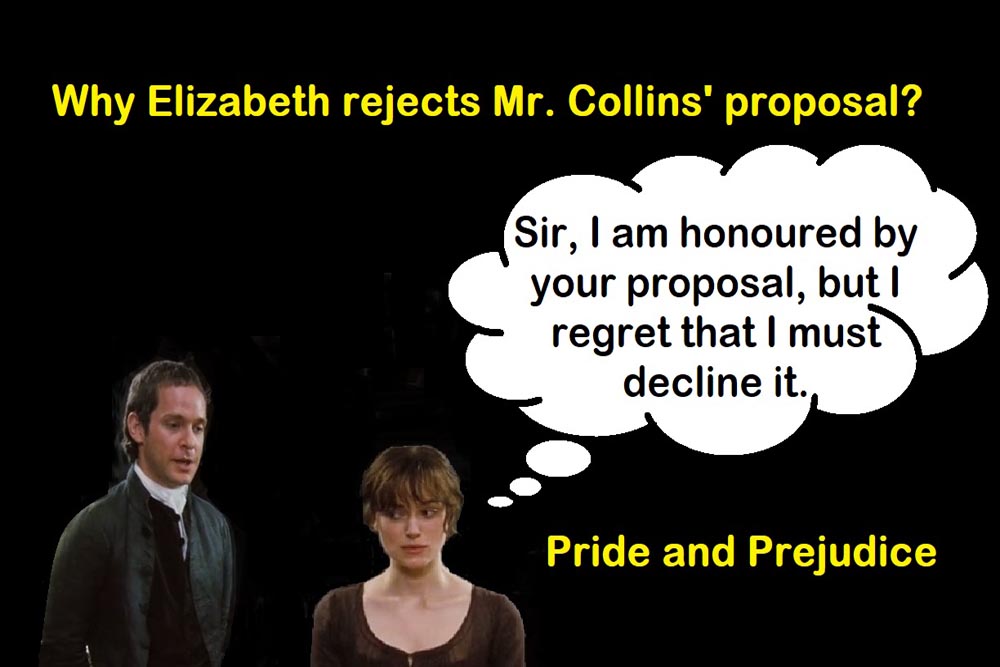 “Sir, I am honoured by your proposal, but I regret that I must decline it.” (Elizabeth Bennet)

Mr. Bennet had an estate of land where Bennet family was residing. Actually that estate was entailed which means Mr. Bennet was not allowed to sell it but it would be transfer to next male heir like his son (if he had) or to his younger brother or other nearest male relative. Unluckily, Mr. Bennet had no male children and according to entailment law his estate will be transferred to Mr. Collins who was his cousin and nearest close relative. So, that is why Mrs. Bennet forced her daughter to marry Mr. Collins to keep that estate to her daughter at least. She reminds her daughter that look at this big house you will own when she rejects proposal of Mr. Collins.

Elizabeth Bennet was against those marriages which are based on financial and economic securities where girls chooses husband with good fortune. But she preferred those marriages which are based on happiness. When Collins insists her to accept his proposal, Lizzy replies that you can’t keep me happy. Her motive was not to select husband who is rich but that one who can keep her happy. Therefore Elizabeth rejects Mr. Collins to marry.

When her friend Charlotte tells her that she and Mr. Collins are engaged; Elizabeth was astonished and said how you accepted a ridiculous man then Charlotte replies  that I am already 27 and I am burden on my parents already and I just want a good house and financial securities that all the girls need. Charlotte’s views were realistic but Elizabeth could not understand her plight at that time but she realized when her own sister eloped with Mr. Wickham.

In nutshell, what Elizabeth wants is happiness in marriage that made her to deny proposal of Mr. Collins because she thinks that she can’t live happy with a foolish man like Collins.

Here Jane Austin wants to reveal her views in Pride and Prejudice on marriages through character of Elizabeth and Charlotte. Elizabeth’s views on love and marriage are not conventional like Charlotte and she does not like those marriages based upon social and economic survival only. Despite of forcing by her mother, she rejects two proposals holding good economic fortune but on the other hand Charlotte accepts what Elizabeth rejects. In doing so, Elizabeth rejects traditional norms where females are obliged to marry for financial opportunity.

She rejects marriage on the basis of economic security and what she wants is happiness in marriage and it could only happen when someone marries for love.