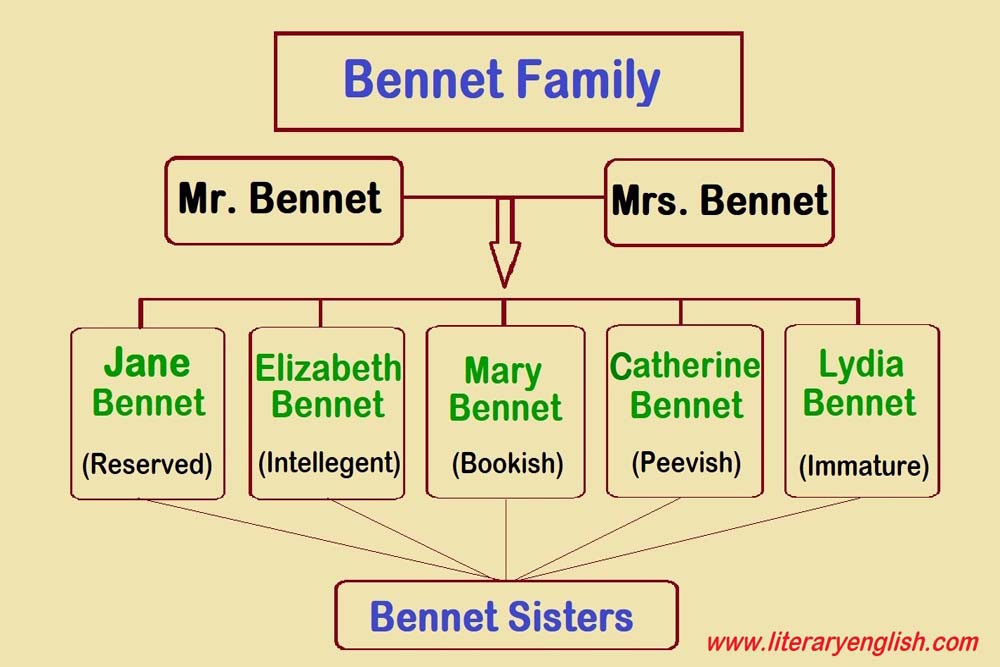 What are the names of five Bennet sisters and how are they different from each others? Discuss Bennet family.

All the sisters are quite young. Jane Bennet is the older daughter of Bennet family and she is a reserves and a handsome beautiful girl. She shares her feeling only to her sister Elizabeth Bennet who is younger than Jane. She falls in love with Bingley but because of reserved nature she hardly shares her feelings to him. They marry happily at the end of the story.

Elizabeth Bennet (sometime called as Lizzy) is second daughter in Bennet family and a central figure of the novel who possesses sharp wit and she is most intelligent of all. She is keen in studying other people’s characters and passes her judgments very quickly. She refuses to marry Mr. Collins and marries Fitzwilliam Darcy. She is the girl who stands against the marriage doctrine of that time that was based on good fortune. She rejected all those proposal made on bases of good fortune and what she likes is happiness in the marriages. Therefore, she rejects first proposal of Darcy and second time accept his proposal when she realizes and observes change in his attitude and his help for Lydia’s marriage. She accepts his proposal and they marry only for the sake of happiness in their life but not for the luxuries as Charlotte Lucas did who married to Mr. Collins just for sake of financial securities.

Marry Bennet is third and Catherine Bennet (Kitty) is fourth daughter in Bennet family. Both sisters are less active characters in the novel; and play no important role. They are also in their teen ages and participate in local balls. Kitty is peevish in nature and joins her sister Lydia in ﬂirting with soldiers and Marry is fond of studying books and keeps herself busy in reading books and keeps aloof herself from social bonds.

After Jane and Elizabeth, Lydia Bennet is an active girl in the novel.  She is youngest among all five Bennet sisters. She is immature and irresponsible girl who reflects shades of her mother. She like flirting and elopes with one young man Wickham who was a military officer. She is unmannered and open hearted girl who like to flirt with all the boys of the world. Mr. Darcy pays to Wickham to marry with Lydia just to save honor of Bennet’s family for the sake of his love towards Elizabeth.