Summary of Pride and Prejudice By Jane Austen 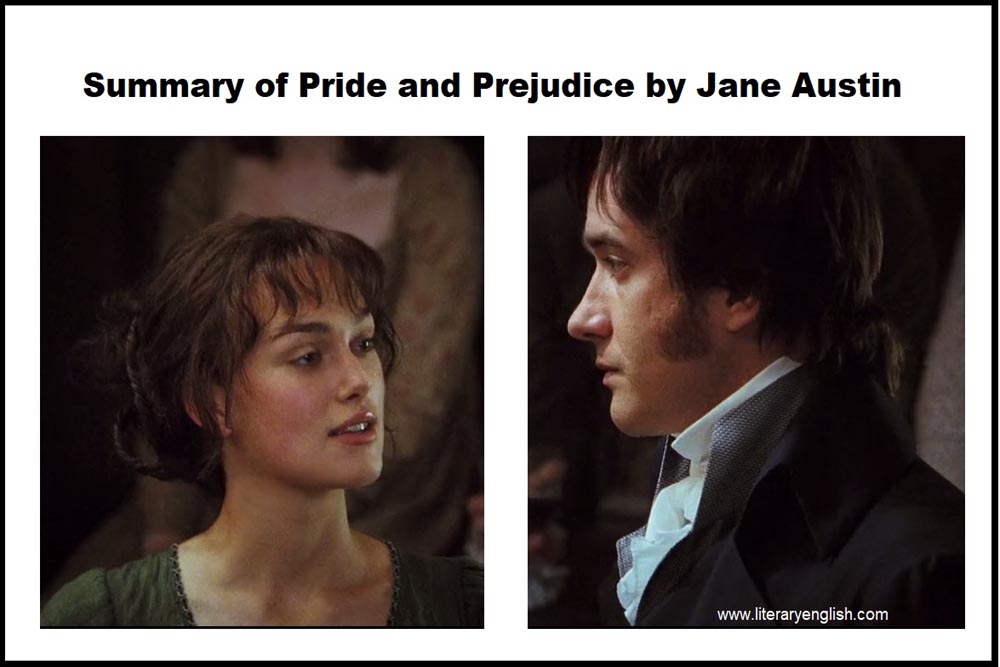 Summary of Pride and Prejudice by Jane Austen

Mr. Bennet, Mrs. Bennet and their five daughters (Jane, Elizabeth, Mary, Catherine, and Lydia) are resident of Hertfordshire. They were excited by the news that a rich single man Mr. Bingley is coming in their neighborhood who rented Netherfield Park. Mrs. Bennet was very happy with a hope that he can marry her one of five daughters to him. She was much worried about her daughters’ marriages.

At a local ball in Netherfield estate, Bennet daughter meet him and they were impressed by his handsome personality and friendly attitude but his friend, Mr. Fitzwilliam Darcy, a landowning aristocrat, could not impress them because of his conceited attitude who does not like to speak and dance with any girl. When on suggestion of Mr. Bingley, he refuses to dance with Elizabeth Bennet and passes comments on her: “She is handsome but not pretty enough to tempt me.” Elizabeth Bennet overhears it. Bingley and Jane danced twice at ball and both were attracted by one another’ personality and friendly attitude. Soon they form an attachment but Bingley’s sisters (who do not like Jane as a wife for their brother Bingley because of lower status of her family and immature attitude of her mother) and Darcy also believes that Jane is indifferent to Bingley.

In short time, Darcy feels himself attracted to Elizabeth despite his some objections to her family’s background and status. He was inspired by her sharp wit, expressive eyes and handsome physique but Caroline Bingley was jealous from her who wants to marry him. Caroline Bingley’s criticism could not lessen Darcy’s admiration. Darcy’s interest in Elizabeth was increasing day by day but Elizabeth was attracted to a military officer, George Wickham, who was handsome and flirting by nature.

Wickham wins Elizabeth sympathies by telling that his respected father worked for Darcy’s father and that he and Darcy grew up together. He further tells her that he was privileged by Darcy’s father, but Darcy disobeyed his father’s bequest of a clergyman’s revenue to Wickham out of selfish resentment. Wickham’s fabrication makes Darcy not only proud but a cruel and heartless man, and Elizabeth share his sympathies disliking Darcy more than before because of his cruel attitude towards Wickham.

When Jane was dreaming for Bingley and Elizabeth was developing her relation to Wickham, William Collins, Mr. Bennet’s cousin, a clergyman, (who was next of kin for Mr. Bennet’s estate after his death because of a legal stricture known as an entail) visits their home. Mr. Collins informs them that his patroness, Lady Catherine, has instructed him to marry and he is intended to have a wife from the Bennet daughters. He shows his interest in Elizabeth because he knew that Jane and Bingley are attached with each other so he chooses Elizabeth. Elizabeth rejects his proposal although her mother was ready to marry her to Collin.

After sometime, Jane is disappointed to know that Mr.  Bingley and the entire Netherfield party have unexpectedly moved to London. Caroline Bingley writes a letter to Jane and informs her that they are not intended to return to Netherfield. Jane predicts that Bingley may marry to Georgiana, a Darcy’s sister, instead of her, who is also living in London. Although Jane accept fate and quietly resigns herself to a life without Bingley, Elizabeth feels her worries and she is annoyed for her sister and suspects that it is plane of Darcy and Bingley’s sisters who were not happy by Jane’s relation with Bingley.

Elizabeth visits her friend Charlotte at her new home in Hunsford, Kent, and meets patroness of Mr. Collins and Lady Catherine De Bourgh, Darcy’s aunt, a domineering lady who meddles in other people’s lives. Darcy visits his aunt with his cousin, Colonel Fitzwilliam soon after Elizabeth’s arrival in Kent. Elizabeth was puzzled by changed behavior of Darcy; he seems to be happy in her company but do not reveals anything. One day, he dares to propose Elizabeth and surprises her by proposing her. She rejects his proposal unexpectedly and blames him responsible for Bingley’s separation from her beloved Jane and for Wickham’s misfortune. The next day, Darcy gives her a letter clearing up that why he influenced Bingley to go away from Jane and also clears her misconception for the facts of Wickham’s situation.

Elizabeth makes a careful examination of the facts that reveals Darcy’s pride; she is surprised at discovery of her own prejudice against Darcy. A series of thought runs in her mind and she starts changing her mind. Elizabeth returns to home from Kent after a month. She again plans a trip to Derbyshire County with her aunt and Uncle Gardiner. There they visit Darcy’s estate of Pemberley. And they meet to Darcy unexpectedly. Darcy surprised Elizabeth by the way how graciously he treats her and her aunt and uncle because she was not expecting good from him because she has rejected his proposal.

Darcy invites Elizabeth at her inn and introduces her to his sister. He has forgotten that Elizabeth has rejected his proposal and he is still in love with Elizabeth, and Elizabeth begins to attract towards him because of his changed behavior. Meanwhile Elizabeth was changing her mind; she receives two letters from her sister Jane telling her that her little sister Lydia has eloped with Mr. Wickham. They leave for home immediately after getting sad news.

Elizabeth was worried that the respect and honor of Bennet family is ruined permanently by Lydia’s elopement.  Now her newly-discovered love feelings for Darcy are hopeless. Lydia was found later on, however, Wickham married to her. After the wedding, when newly married couple visits Bennett’s home for dinner, Elizabeth was surprised when Lydia tells her that Darcy was at their wedding and he paid heavy amount to Wickham to marry just to save the reputation of the other Bennet daughters.

Mr. Bingley returns to Netherfield estate and soon asks Jane to marry him. Jane, of course, accepts, and Mrs. Bennett’s ecstasy is only narrowed by her annoyance at Darcy’s occasional presence. In the meantime, Elizabeth’s bliss for her sister is interrupted by sudden visit of Lady Catherine De Bourgh, who tells that she has heard a report that Elizabeth and Darcy are engaged, which they are not. She warns Elizabeth to stop any romance that may exist between Darcy and her. She scolds on the gullibility of such a match for marriage, and then she asks her to promise not to accept marriage proposal from Mr. Darcy. Elizabeth refuses in clear wording. Lady Catherine leaves furiously, threatening to approach Darcy for Elizabeth’s silly response. Lady Catherine tells to Darcy about her impudence and scolds him about the silliness of an engagement between them. When Lady Catherine tells him about Elizabeth’s response to her demands: Darcy hopes that Elizabeth has had a change of heart and she will accept him now.

Few days later, Darcy comes to Longbourn with his friend Mr. Bingley. Elizabeth goes for a walk with Darcy and pay her thanks for his involvement in Lydia marriage to pay Wickham. In return, Darcy announces that he still loves her very ardently and wants to marry her. Elizabeth accepts his proposal and they discuss for the misunderstanding between them and how their feelings changed. Soon they get marry and after the marriages of Elizabeth and Darcy and Jane and Bingley, life progresses happily for the newlyweds.

The article “Summary of Pride and Prejudice by Jane Austen was written by S K Niazi.