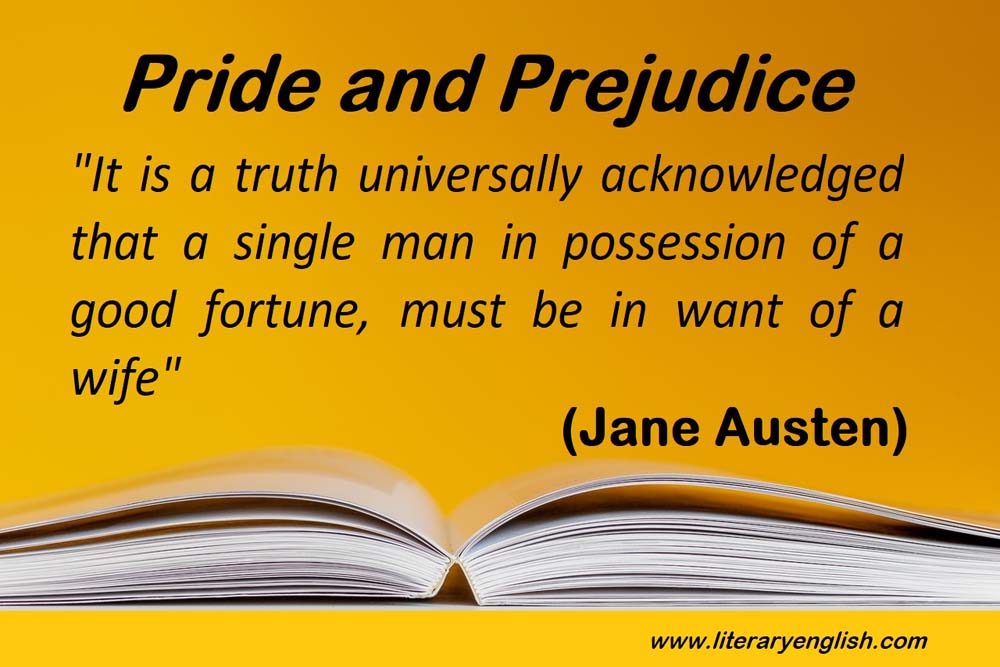 “It is a truth universally acknowledged that a single man in possession of a good fortune, must be in want of a wife.” (Jane Austen)

This is opening line of the novel, Pride and Prejudice, and is one of the famous opening lines in fiction writing. This line carries miniature sketch of the entire plot. Most of the quotes of Jane Austen are used in an ironic sense and carry opposite meaning than the literal text. This quote is also an ironical statement and Jane wants to reveal that the reverse of the statement is true.

“A lady’s imagination is very rapid; it jumps from admiration to love, from love to matrimony in a moment.” (Darcy)

Above said quote was spoken by Fitzwilliam Darcy when he and Caroline Bingley were discussing Elizabeth and Bingley asks Darcy in a joking way that when their wedding (mean with Elizabeth) is to be scheduled.

“Happiness in marriage is entirely a matter of chance. If the dispositions of the parties are ever so well known to each other, or ever so similar before-hand, it does not advance their felicity in the least.” (Charlotte Lucas)

These lines were spoken by Charlotte Lucas when she and Elizabeth are discussing about marriage. Here Elizabeth’s views are that a man should marry for happiness but not for a good fortune. While, on the other hand Charlotte’s views are different than that of Elizabeth and she disagrees to her that happiness in marriage is entirely a matter of chance.

“The distance is nothing when one has a motive.” (Elizabeth Bennet)

This one line quote was spoken by Elizabeth Bennet when Jane Bennet receives invitation from Bingley to visit him in Netherfield. When they talk about distance and Jane hesitate to go then Lizzy says that motives do not matters with distance. Mrs. Bennet urges her daughter Jane to use a horse rather than a carriage so she’ll have to stay there overnight. Unfortunately, Jane Bennet becomes sick due to bad weather.

This statement was passed by Mr. Bennet when Mrs. Bennet ask Mr. Bennet to make his daughter agree to marry Mr. Collins but Elizabeth has rejected Collins proposal and do not want to marry him. Mr. Bennet, who likes his daughter, also agrees with Elizabeth in her decision.

Some more quotes from Pride and Prejudice

·        “I declare after all there is no enjoyment like reading! How much sooner one tires of anything than of a book! — When I have a house of my own, I shall be miserable if I have not an excellent library.” (Caroline Bingley)

·        “Your defect is a propensity to hate everybody.” “And yours,” he replied with a smile, “is willfully to misunderstand them.” (Mr. Darcy)

·        “There is nothing so bad as parting with one’s friends. One seems to forlorn without them.” (Mrs. Bennet)

·        “My courage always rises with every attempt to intimidate me.” (Elizabeth Bennet)

·        “Vanity and pride are different things, though the words are often used synonymously. A person may be proud without being vain. Pride relates more to our opinion of ourselves, vanity to what we would have others think of us.” (Mary Bennet)

·        “One cannot be always laughing at a man without now and then stumbling on something witty.” (Elizabeth Bennet)

·        “People themselves alter so much, that there is something new to be observed in them forever.” (Mr. Bingley)

·        “I have been meditating on the very great pleasure which a pair of fine eyes in the face of a pretty woman can bestow.” (Darcy)

·        “But vanity, not love, has been my folly. Pleased with the preference of one, and offended by the neglect of the other, on the very beginning of our acquaintance, I have courted prepossession and ignorance, and driven reason away, where either were concerned. Till this moment, I never knew myself.” (Elizabeth Bennet)

·        “The upstart pretensions of a young woman without family, connections, or fortune. Is this to be endured! But it must not, shall not be. If you were sensible of your own good, you would not wish to quit the sphere, in which you have been brought up.”  (Lady Catherine)