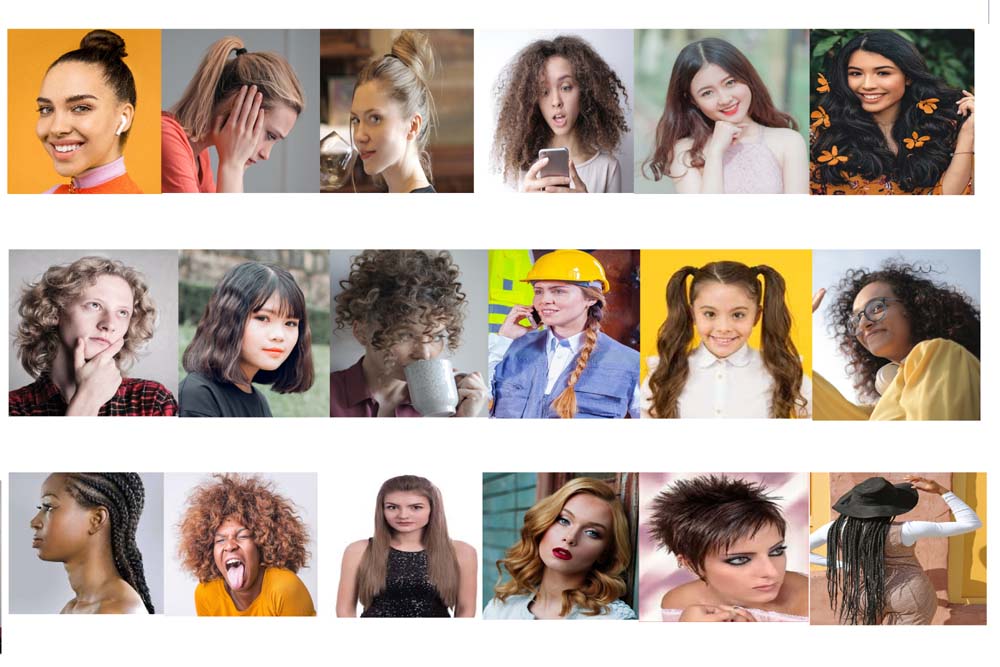 (Women arrange their hair in such a way that hairs are divided into three parts and weaved together smoothly till end, also known as plait)

Women braid their hair every morning.

Her braid is three feet long with thick black hair.

Jane and Rocky wear their hair pulled back in a ponytail.

Henry sketched a queen with pigtails.

(A bob, also known as a bob cut, is a haircut with short- to medium-length, in which the hair is formally cut straight around the head around jaw-level, often with a fringe or bangs)

(A long curl of hair made with curling iron; also known as princess curls or corkscrew curls)

She was looking pretty with golden ringlets.

Alia was in hurry so she made a messy bun and went out in a while.

(A style where strand of hair grows in a tiny spring-like, corkscrew shape. it is often referred to as “thick”, “bushy”, or “woolly”)

Jam was wearing an artificial afro.

Her ash-blonde hair was worn bouffant, and her red lipstick made her appearance like a clown of a circus.

(a style in which hair are parted down the middle and gathered into two balanced bundles, like ponytails, falling down near the ears ( bunches are also called pigtails, twintails or angel wings)

My daughter was looking like a doll in bunches.

Sofia has short hair with bangs.

Her look in ash-blond feathered hair was hilarious.

(French braid includes three divisions of hairs that are braided jointly starting from the crown of the head to the nape of the neck, often described as braided backward)

A blushing girl with black thick hair and fringe was looking much pretty.

(A haircut of men uually where the hair flips outward, like wings)

(A mid-length haircut style with a fringe (bangs) that brushes over the forehead, at back up to collar length, with the ears partly covered by the hair)

An old woman with grey hair and pixie hair cut was waving at me.

(A style where hairs are combed back, away from the forehead and back towards neck collar, then held in place with a hairstyling product)

(A hairstyle in which hairs are twisted or pulled up at the top or back of head, often requested by brides for their wedding day)

(A buzz cut is a form of short hairstyles usually cut with electric clippers. Buzz cut styles include the crew cut, flattop and butch cut)

Donald Trump is known as having a double comb-over, in two directions.

Gray: (hairs that have lightened to a grayish color; usually associated with age)

Golden-blond: (a color with golden and honey shades)

Ash-blond: (Ash blonde color is a shade of blonde with a gray tint to make an ash color)

Strawberry-blond: (color that is a blend of warm blonde shade and light red)

Salt-and-pepper: (hair of a mix blend of a person’s natural hair (black color) along with gray color and it is associated with age

Texture or Appearance of Hair:

Wavy: (curved back and forth, appearance hair like water waves curving slightly)

Curly: (coiled or spiral-shaped, a bit log hair having curls)

Untamed: (not combed or dressed)

Stiff: (rigid and firm; difficult to comb or dress)

Cropped: (shorted hair that are trimmed)

Straight: (hair without any bend or curls, smooth hair)

Spiky: (all hair sticking upward like spikes out from the head)

Trimmed: (cutting of hair to make them short)

Parted:  (hair divided into sections with a comb or brush)

Bushy: (thick and full hair those are difficult to comb)

Coarse: hair with rough and hard texture and difficult to manage)

Scraggly: (untidy and not clean or healthy)

Baby-fine: (soft, silky and smooth hair like a baby)

Balding: (less density of hair or no hair on head due to hair fall)

Bald spot: (spot on head with no hairs on it)

Receding: (gradual loss or fall of hair at the front of the head)

Dyed: (hair that are colored, hair with artificial color)

Highlighted: (it is partial coloring based on shades to make the hair more colorful)

Streaked: (Hair colored in contrast instead of highlighting base color)